“Love, hatred, you have only to choose; they all sleep under the same roof; you can double your existence, caress with one hand and strike with the other.” As the Marquise de Merteuil points out in Choderlos de Laclos’s scandalous book, Dangerous Liaisons (later immortalised on the silver screen by Stephen Frears), the 18th century was a period when love was coupled with debauchery and antagonism. It was the age of opulent parties, extravagant art, insane monarchs and political tension, which resulted in some of the most powerful revolutions and uprisings that history has ever witnessed. This is the highly charged backdrop for Yorgos Lanthimos’s latest dazzling jewel, The Favourite.

Divided into eight chapters with eye-catching titles such as “I Dreamt I Stabbed You in the Eye”, The Favourite places us in the maddening 18th-century court of Queen Anne (superbly played by Olivia Colman, who deserves every award for this role). The Queen is faithfully accompanied by Lady Sarah (a brilliantly catty Rachel Weisz), her childhood friend-turned-lover who is the only person capable of controlling her impetuous nature. Palace life runs smoothly, as ducks are raced indoors and the Queen gorges herself on iced cakes. However, this is merely the calm before the storm, as the arrival of Lady Sarah’s cousin, Abigail (Emma Stone), starts to tear at the foundations of Sarah and Anne’s relationship.

The Favourite, much like the rest of Lanthimos’s repertoire (particularly The Lobster and The Killing of a Sacred Deer), stands out for its deliciously wicked sense of humour. In the spirit of Mozart’s opere buffe (The Marriage of Figaro comes to mind), the film is delightfully bitchy and Lanthimos packs all the punches. Colman excels as the screeching Queen Anne, who snaps at unsuspecting footmen or musicians and barks at courtiers to pet her 17 rabbits when entering her room. Whereas she is comically outré, Weisz and Stone’s humour lies in the calculating, razor-sharp remarks and objects they hurl at each other (sometimes quite literally!).

Nonetheless, there is also a tragic backstory that connects each of the three women in suffering, which ushers in some surprisingly emotional moments. We find out that the 17 rabbits that frantically hop about the Queen’s chamber symbolise each of her dead children. Anne behaves like an overgrown child because she lost all of her offspring, resulting in a pathological need for care and nursing. Olivia Colman carefully knits together the tempestuous and the pathetic elements of her character, making the audience sympathise with her despite her goofiness and inability to rule a country.

Lady Sarah is also torn between love and calamity, as she genuinely cares about the Queen but is at the same time pushing her husband’s interests in the war against France. Weisz has the hardest role to play, as she has to balance the cold-heartedness and stony demeanour of Lady Sarah and convince us that, ultimately, she is the only one who is a perfect match for Queen Anne. In the standout scene of the movie, Lady Sarah passionately declaims what makes her love for Anne pure and true: “You wish me to lie to you? ‘Oh, you look like an angel fallen from heaven, your majesty.’ No. Sometimes, you look like a badger. And you can rely on me to tell you”. Her rival, Abigail’s, flattery towards the Queen is not love because, as Shakespeare points out, “Love is not love which alters when it alteration finds”. Abigail is playing a one-sided game in which she is the star and, once she gets what she needs, is ready to cast aside whoever has helped her like a rabbit to the wolves. Her love, like favour itself, shifts direction constantly. 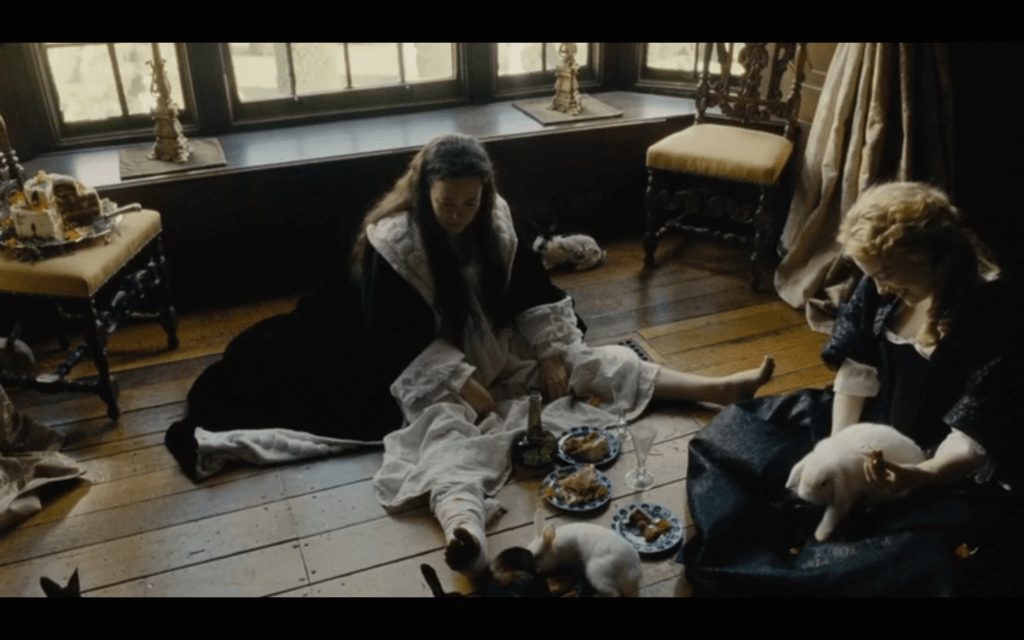 In a recent interview, Rachel Weisz stated that The Favourite is “like a funnier, sex-driven All About Eve”, referring to the classic 1950s Bette Davis film in which Davis is ousted by a much younger actress (Anne Baxter). Abigail is the Eve of The Favourite, a conniving little busybody whose aim is to become a Lady once more after her family was left in financial ruin. She seduces Anne, but does not love her and, by the end of the film (going into spoiler territory here), the veil is pulled from the Queen’s eyes and she realizes that, by kicking Lady Sarah out of the picture, she has pushed the only person who had the slightest possibility of helping her.

Refreshingly, Lanthimos keeps the same-sex relationships as a casual affair. The sexuality of the three protagonists is not the main issue at hand (in fact, no-one even bats an eye), and the sex scenes range from quietly passionate to deliberately awkward and downright funny. The director has expressed the idea that he wanted to show the three women as human beings, not as sex objects, or a curiosity to be wondered at. This is refreshingly welcome in the representation of LGBT+ characters. Queer audiences should have the right to watch a narrative in which the women simply happen to be in love with each other and enjoy seeing queer characters who are complex in so many ways other than who they decide to sleep with.

Not only content with being a feast for the mind, The Favourite is also a spectacle for any art and music lover. Interestingly enough, here is where Lanthimos’s attention to detail and bizarre anachronisms sparkle. Filmed at the breathtaking Hatfield House in Hertfordshire, the decoration of the rooms often mirrors the character’s own personalities. Anne’s room, for example, is just as cluttered and jumbled as she is, with tapestries covering the walls, paintings placed in front of the tapestries, and gold leaf adorning every corner. It is an intoxicatingly overwhelming experience that shows off the Baroque in all its glory.

Contributing to this luxurious confusion are the visual and verbal anachronisms that are peppered throughout the film. Nonetheless, Lanthimos never goes full Baz Luhrmann, preferring to take a subtler Jarmanesque approach. His characters speak in a more modern tone than in most period pieces, quipping words like “cunt-struck” and flinging the f-word as if there were no tomorrow. Watch out too for a hypnotizing dance sequence, which looks like something straight out of a Northern Soul/New Romantics music video. Speaking of music, The Favourite boasts a stellar soundtrack. Vivaldi, Purcell and Handel rub shoulders with contemporary composers including Olivier Messiaen, Anna Meredith, and a harpsichord version of Elton John’s “Skyline Pigeon”. A heady, eclectic mix for an appropriately eccentric film.

The Favourite, although not as bleak or shocking as some of Lanthimos’s previous films, is in my eyes his crowning achievement. Choderlos de Laclos could have been writing about The Favourite when he penned this passage in Dangerous Liaisons: “When one woman strikes at the heart of another, she seldom misses, and the wound is invariably fatal.” Lanthimos strikes at many hearts with this film and his passion for the machinations of human emotion shine through. Overall, he has crafted a picture with an excellent ensemble of actors, screenwriters, designers, and musicians that should make sure that the winds will blow in his favour and set the team on course for Oscar success.