Even if you follow politics only peripherally, you’ve probably heard about Alexandria Ocasio-Cortez. Ocasio-Cortez—or AOC, as many refer to her by her initials—is one candidate among a wave of new Democrats who ran in their districts for the 2018 congressional election. Ocasio-Cortez became a member of the U.S. House of Representatives from New York’s 14th district through a stunning political upset. She has since become the figurehead of the progressive movement in Washington. However, focusing on her celebrity and regarding her as the chief advocate for progressive change diminishes the force of the new political movement that brought her to power. Rachel Lears’ Netflix Original documentary Knock Down the House (2019) revolves around the grassroots primary campaigns of four working-class women, including Ocasio-Cortez, to depict the momentum of this widespread, people-powered movement that has serious potential to transform national politics.

Rachel Lears, director, producer and cinematographer, has previously contributed to Ethnography of No Place/Empathics (2008-2014), Birds of Passage (2009), and The Hand That Feeds (2014). According to coverage from Vanity Fair, she was inspired to document charismatic female candidates who were not career politicians in the aftermath of the 2016 general election, and this motivation became the impetus for Knock Down the House. Lears selected the subjects of her documentary by reaching out to grassroots political organizations Brand New Congress and Justice Democrats. These organizations underpin the volunteer-led, non-partisan movement striving to replace career politicians with everyday working-class representatives. Knock Down the House had its world premiere at the 2019 Sundance Film Festival, where it won the U.S. Documentary Audience Award and the Festival Favorite Award. It is also one of those films with the noteworthy distinction of receiving a 100% rating by critics on Rotten Tomatoes.

Who are the other progressive Democrats contending for political office that this award-winning documentary features? In order of their appearance in the film after Ocasio-Cortez, they are Paula Jean Swearengin (WV), Cori Bush (MO), and Amy Vilela (NV). These four women entered primary races in their districts and became serious contenders for their seats. They are all working-class activists compelled to enter politics by personal tragedies that stem from entrenched political corruption. Although Ocasio-Cortez was the only grassroots politician featured in this film who ultimately won in the primary election, the reality that these ardent women made it onto ballots in their districts and won significant percentages of votes without relying on the established political infrastructure is itself a major victory for the people-led political movement. 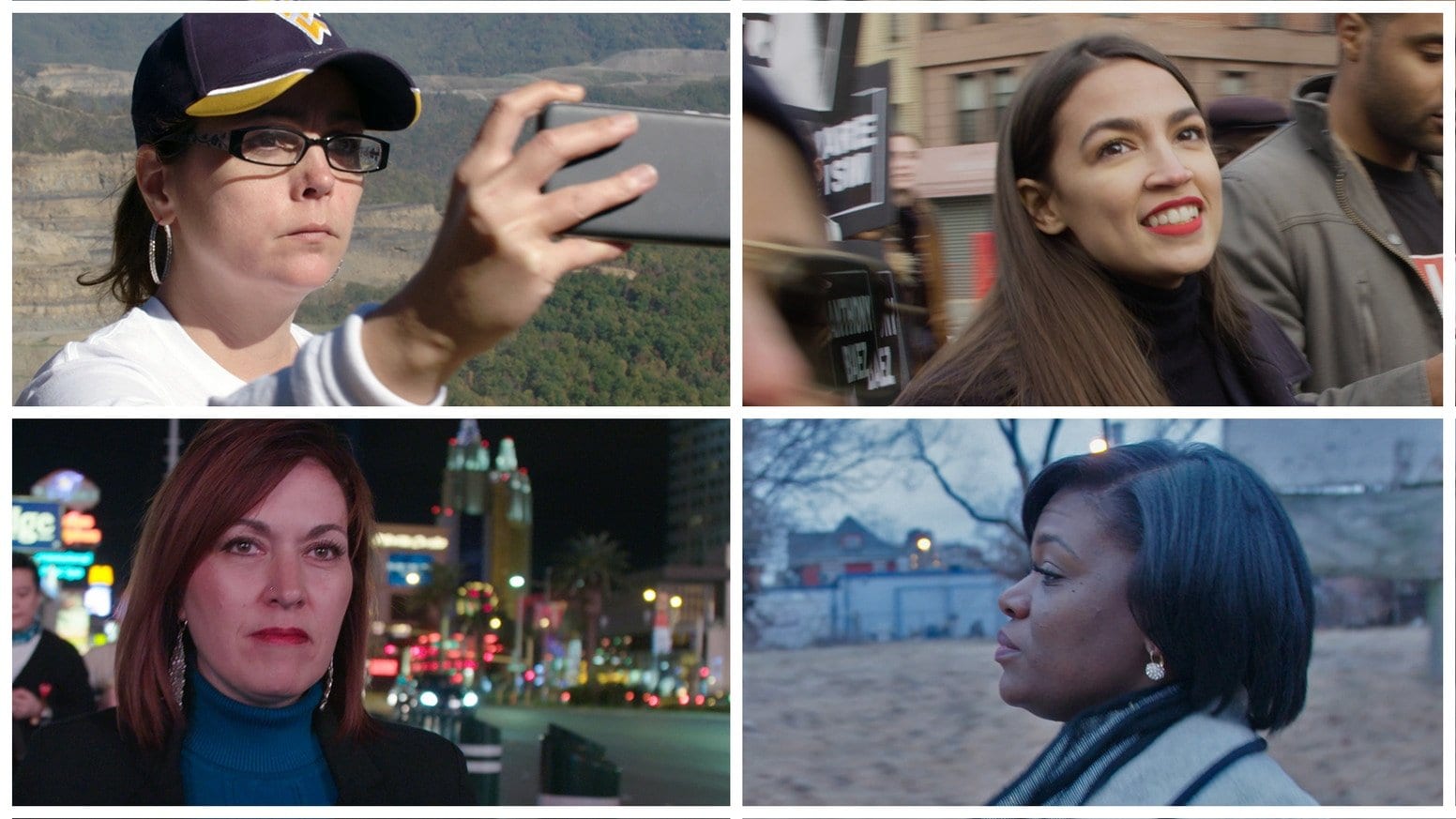 The major commonality these women share is that they come from Democratic districts and run progressive campaigns against established Democratic politicians. Their actions reflect the values of the political movement they emerge from, which upholds the progressive populist view that established politicians on the left share in propagating injustice and oppression on a massive scale. They are motivated by the calamities that money in politics has effected in their lives and in their communities. Like other progressive Democrats, these women commit to the campaign promise that defines their platform: by refusing to accept any corporate political action committee (PAC) money or donations, they will contribute to the removal of big money interests in politics.

If another country came in here, blew up our mountains, and poisoned our water, we’d go to war. But industry can. — Paula Jean Swearengin

Cori Bush is a registered nurse and ordained minister from St. Louis, Missouri who found herself contributing to activist efforts in the riotous aftermath of the extrajudicial police killing of Michael Brown in Ferguson. These experiences led Bush to contribute to community organizing and eventually led to her nomination as a Brand New Congress representative. She ran against Representative Lacy Clay, who has held their district’s seat since 2001 and was preceded by his father, Representative Billy Clay, who held the seat since 1969. Ultimately, Cori Bush lost the primary race to Lacy Clay, but she nonetheless made serious progress in her campaign, winning 36.9% of votes. Paula Jean Swearengin is an activist from Coal City, West Virginia who is driven to environmental activism and politics by the rampant exploitation of natural and human resources in her district. Swearengin ran against the incumbent United States Senator Joe Manchin (D-WV) in the primary race but lost after winning 30.21% votes. Amy Vilela from Las Vegas, Nevada left a career in finance to become a universal healthcare activist after experiencing personal tragedy. Vilela’s 22-year-old daughter died from a pulmonary embolism after being denied treatment because she couldn’t provide proof of insurance. Vilela ran on the premise of applying her understanding of finances to combatting the corruptive, insidious power of industry in policymaking, but she lost the primary seat to Steven Horsford, garnering just 9.2% of votes.

This [iPhone] is a commodity. My daughter’s life wasn’t. — Amy Vilela

Knock Down the House adopts the fly-on-the-wall documentary style to convey a genuine view of everyday women engaged in a fierce, high-stakes political race. This stylistic approach is essential for the work that Lears sets out to accomplish with the documentary, and it amplifies the powerful experiences of normal people reaching out beyond the status-quo to disrupt the highest enclaves of power in their political districts. An expository or performative documentary style that centers producers’ interpretations would have had a reductive impact on the film’s content. Narration and explication would have diminished the force of meaning. For example, the gravity of this insurgent political movement sets in when view Ocasio-Cortez in her authentic state, routinely scooping ice at her bar-tending job in between bouts of door-to-door campaigning and canvassing, or when we see Swearengin herself clearing brush out from an overgrown lot for a political event rally. 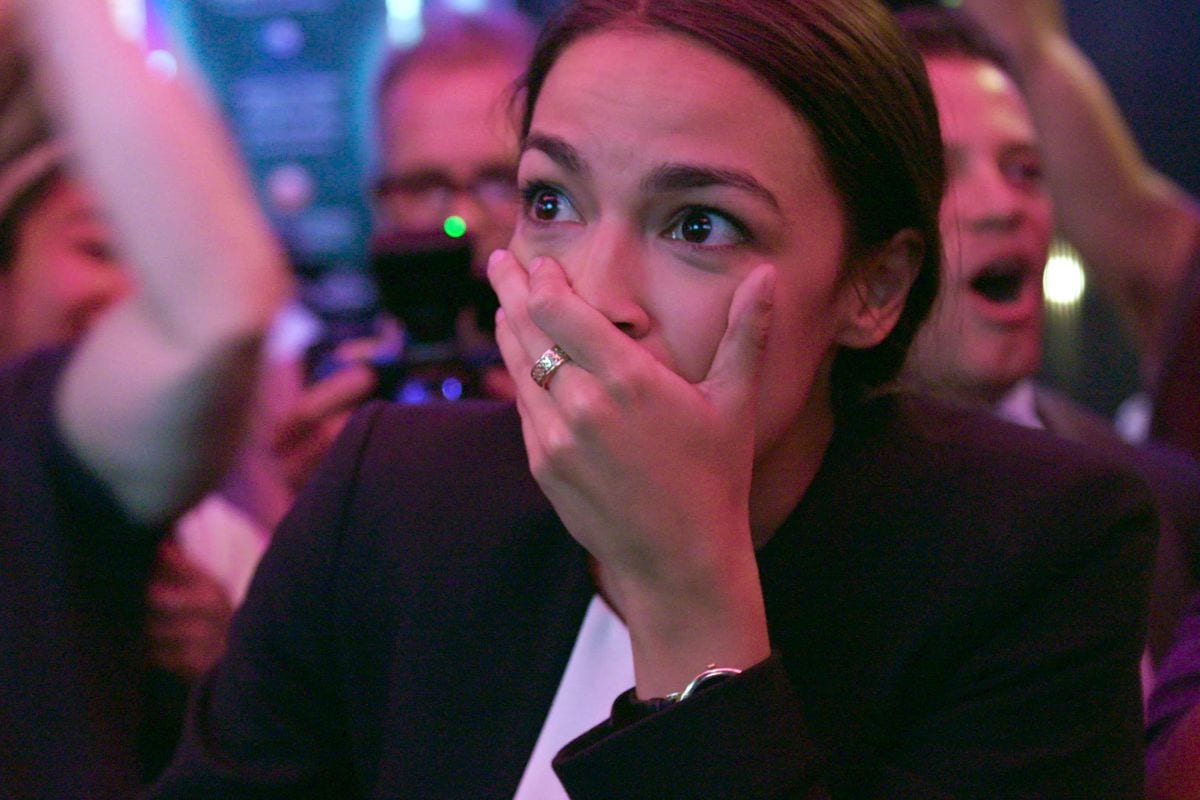 No amount of expository explanation would outdo the sheer sense of defeat captured in Joe Crowley’s (U.S. Representative from New York’s 14th District, 1999-2019, and Chair of the House Democratic Caucus, 2017-2019) dumbfounded, crestfallen gaze as Ocasio-Cortez powerfully overrides his routine political tricks during their last public debate before the primary election. At this moment, we know that Crowley knows that he is about to lose his twenty-year congressional seat streak to a plucky 28-year-old who has never run for office. The effect of that shot is priceless. Similarly, the severity of profound loss is expertly communicated through Lears’ depiction of Swearengin’s, Bush’s, and Vilela’s respective defeats on their primary election nights. In each case, their losses represent more than mere political downfall. It becomes clear that these women were fighting to win for the health, safety, and well-being of their communities and their sense of defeat is compacted by this collective burden.

This race is winnable. And don’t let anybody tell you any different because the power out there, I’m telling you, is an illusion. — Alexandria Ocasio-Cortez

Lears’ work skillfully depicts the exceptional nature of the revolutionary political movement she set out to portray. The film communicates both the magnitude of the issues at hand and also the mechanics of political activism in a filmic language that viewers who are well-versed in politics and those who are new to politics alike can apprehend. Because Lears provides a comprehensive overview of how these women’s campaigns unfolded, we are able to draw conclusions about how different factors, such as canvassing strategies and public sentiment in congressional districts, influenced the outcomes of these primary elections. For example, we can draw specific comparisons between the community organization infrastructure that defined Vilela’s and Ocasio-Cortez’s respective campaigns. Whereas Vilela was supported by a group of young and innovative staffers, Ocasio-Cortez’s backing by the comparatively more experienced political activist organizers JoAnn and Donnie Whitehead may have significantly propelled her advantages as a grassroots politician. Likewise, Cori Bush’s definitive challenge with persuading constituents to stray from their sometimes lifelong voting loyalty to Representative Lacy Clay and his father who preceded him is shown to have very likely contributed to her ultimate loss in the election.

That’s why I’m running. This shouldn’t be about one person being a king—being like, ‘Kiss my ring.’ It’s not about that. — Cori Bush

All things considered, Knock Down the House demonstrates the formidable effects of new media in politics. Digital media are presented as another factor that made Ocasio-Cortez’s bid for the U.S. House of Representatives successful. Not only does practiced use of social media platforms distinguish Ocasio-Cortez as a politician with a knack for directly communicating to her base—new media is itself the infrastructure that has made new political movements possible. The significance of Netflix’s contribution to this grassroots political movement in providing a platform for a documentary like Knock Down the House just as the 2020 election cycle takes off cannot be understated. Digesting the content of this documentary leaves us with many unanswered questions. Will Paula Swearengin, Cori Bush, or Amy Vilela run for office again? Will the documentary contribute to the growing public awareness of a widespread political movement to transform the entrenched privatization of public affairs in the federal government? Will new media propel more working-class people that enter politics into political celebrity? You tell us: as a lover of Damn Fine TV/Film, does watching Knock Down the House invigorate you to believe that politicians like Ocasio-Cortez are providing solutions to national crises that are healthy alternatives to Dr. Amp’s golden shovels?