Sometimes a film doesn’t truly connect on a first, second or even third viewing; instead, it’s up to the passage of time itself to help the celluloid diversion reach its full potential. 1994’s Quiz Show was a dramatic highlight at the time of release, but the film’s messages seem more geared towards today’s mercurial audiences than it ever was during an initial release. In a world of 24/7 reality TV and endless internet celebrities, the possibilities of “reality” and its all too common abuse have never been more prevalent. So, how does a decade’s old scandal connect with the current perception of fame and greed? As the case of Twenty-One shows, some things never change.

Echoes of the Past

The 1950s were an interesting time for the medium known as television—still new and looking for its own identity—as this mechanical window to the world was in a midst of growing pains while coming to terms with a perceived cultural identity. It only took a Supreme Court decision to give broadcasters the go-ahead for one of the decade’s most controversial and exploited genres. Stating that game shows were not considered as gambling, illegal or otherwise, the court’s ruling was enough to introduce an onslaught of shows; all vying for the coveted prize of popularity. It’s easy to see why there would be a film covering this story—more than salacious—as the scandal itself revolved around humanity and its worst instincts when put to the test. As slow burning and methodical as the true events, the film is both an exploration of the people who made the sensation, and the nameless audience who took in the unfolding spectacle without a second thought about what might be behind their new idol. 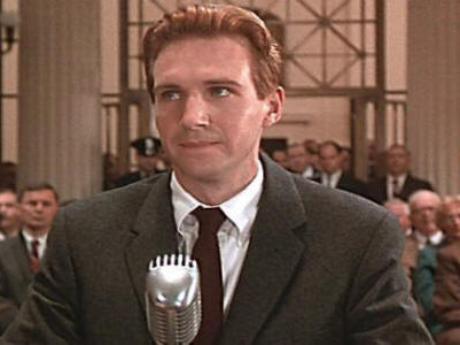 In a time where everyone seems to be a celebrity in their own right, it’s hard to imagine a period where the title was more carefully chosen. The ‘50s were littered with iconic movie stars in their prime and up-and-coming actors just years away from their defining big screen roles; TV was far from established as the go-to source for idolatry, yet it was slowly making that climb with the likes of Lucy and the brothers Cartwright. Among it all, there were limited options for the public to find their way into those lands of dreams; that’s where the quiz show phenomenon firmly took root. This new form of entertainment was fertile ground for the notions that keep everyone on track amongst the listless monotony of everyday life. Pulsating with the concepts of likability and participation, they were the perfect vehicles for audiences to dream of their chances and root for people just like them to attain success. Charles Van Doren seemed like one of the “lucky” few who made it to the other side of the screen. Polished and intelligent, his persona was elevated steps above the myth of the “common man,” but safe enough for anyone to connect with. While the film takes liberties with some of the real-life aspects, it’s hard to underestimate the real decisions that Van Doren made as he got caught up in his own cult of celebrity. He was both a man of his own means and a pawn of higher-ups—the same figures that always seem to appear when moral ambiguities arise.

No good story is complete without its villains. Whatever you think of the contestants that populated the quiz show scandal, the powers that be seem to hold their own when it comes to the worst of human nature. Twenty-One wanted to be not only the top quiz show but the series that everyone was talking about. No social media campaigns, no viral videos to exploit; they were in search of the coveted water cooler conversations that occurred every day. Neighbors, friends, even strangers—that was the key to success. Frankly, it’s a strategy that plays out today in every new reality gimmick disguised as a show. Producers Enright and Freedman sensed they had a problem that was keenly rooted in not only their viewers’ stereotypes but the very perception of what constituted a marketable celebrity at the time. After all, the customer—or in this case the mass of potential customers—is always right.

Advertising was at one point the lifeforce of television; while the lines are blurry even in our digital divide, it was far from clear for this fledgling medium. Among that complicated synergy came the connection between Twenty-One’s sponsor Geritol and its network NBC. For this union, the stakes were high—as it always is when money and power is involved. Make no mistake, their intentions were solely focused on having control at any cost. It was a blatant stance that didn’t care about the consequences and almost encouraged a loss of the naivety. Something that goes on today in the form of constant advertising and controlled chaos. 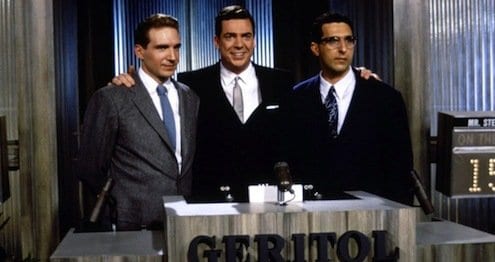 The very nature of the quiz show scandal reveled in the worst instincts. In some part, that’s the same formula that is going on with the current climate of fame at all costs. While some films would have shied away from it, Quiz Show took license to go deeper into the awakening and ultimate loss of naivety that came from the period’s events. In many ways, Richard Goodwin acts a voyeuristic complement to the things people want to know and the things most choose to keep hidden. His presence in the discovery process is crucial in helping the audience acknowledge things are not what they seem and possible “heroes” don’t always show their flaws. Through his investigation, the audience gets to experience sides of the characters that those who experienced the real-life events would have savored. More than just a way to explore the investigation and those that took part in it, these moments provide genuine glimpses into the people involved—options far from available to the public as their knowledge grew of scandalous development. Now society gains and loses its innocence with every second that passes; no-one is shocked by the daily news, and the cult of fame fluctuates with each new problematic discovery. There’s no room for the loss of naivety anymore—it’s already gone.

The scandal of Quiz Show is not some far-off possibility that can be ignored when the film stops; instead, it echoes the basic principles audiences are grappling with now. The aspects of loyalty, popularity, greed, and fame itself are now even more difficult to control or pinpoint in an increasingly chaotic world. Some things never change.

We publish new content daily that can easily be found by following us on Twitter, Instagram, by joining our Facebook Page or becoming an email subscriber here on the site. Thank you as always for your support of 25YL!

If you would like to write for 25YL leave us a message on our website here or send an email to: 25YearsLaterSite@gmail.com