“As a matter of cosmic history, it has always been easier to destroy than to create.”

A Classic and a True Sequel

When a film becomes a “classic,” it can sometimes be ground down to its simplest parts for consumption. Sometimes, the movie-going public hasn’t even seen a film considered “classic” but know every plot point and can quote major portions of its dialogue. Star Trek II: The Wrath of Khan is one of these types of movies, coming out in the seminal film year of 1982, which brought us similar classics like E.T., Raiders of the Lost Ark, Rocky III, An Officer and a Gentleman and the surprise box office smash Porky’s. Even those who don’t know the Enterprise from a ’79 Pinto can quote William Shatner’s anger-filled “Khhhhhaaaaaaannnnnn” and see Ricardo Montalban’s gleaming chest in their mind’s eye when the film’s title is brought up.

And while this sci-fi revenge drama has become diluted over time by popular culture and the ravages of time, one can easily forget the subversive nature of The Wrath of Khan’s narrative. Though an untraditional sequel to Star Trek: The Motion Picture on the surface, seeing as The Wrath of Khan shares no related events or story from the previous adventure, the film is, on a thematic level, a true spiritual sequel, carrying on the legacy of the human adventure that The Motion Picture warned us was just beginning. 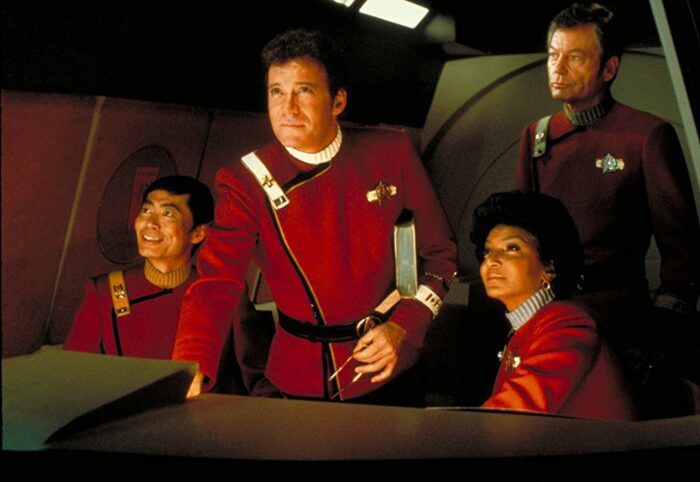 Star Trek: The Motion Picture was about the birth of consciousness, but on a macro scale. We saw a gigantic supercomputer evolve into another level of understanding and, in turn, saw it as a metaphor for the human adventure; the ability to learn about ourselves and grow beyond a static level of thinking. Star Trek II: The Wrath of Khan, beneath the naval/U-boat-esque battles in space and revenge histrionics of the titular villain, continues The Motion Picture’s view of consciousness but, this time, on a micro-scale, viewing the patterns of life, and how it is lived, on a very minute level: from the perspective of our very human, very fragile main characters directly.

However, after an odd message is received from space station Regula One, manned by the brilliant scientist Carol Marcus (Bibi Besch), related to Project Genesis (a powerful probe that can generate life on a planetary scale from scratch), the Enterprise decides to embark on a training mission to investigate. Joining them on the voyage for inspection purposes is Admiral James T. Kirk (William Shatner) who is celebrating his birthday in a dreary mood, feeling trapped “behind a desk.”

Little does Kirk and crew know that Regula One has been taken over by superhuman tyrant Khan Noonien Singh (Ricardo Montalban), who, thanks to the crew of the USS Reliant, under the command of Captain Terrell (Paul Winfield) with his first officer Commander Pavel Chekov (Walter Koenig), has been released from his planetary exile on Ceti Alpha V and is looking for revenge…mainly against one James T. Kirk. Khan has specifically sent for the Enterprise so he can meet the man who exiled him to Ceti Alpha V fifteen years earlier face to face, man to man…and to the death.

The Wrath of Khan and Aging 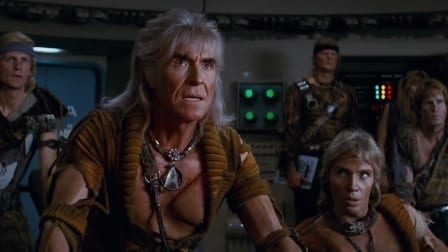 While The Wrath of Khan is, first and foremost, about said wrath, the film deals with the concepts of aging and legacy. The focal point of Kirk’s hero’s journey is his struggle with the idea of becoming too old to provide anything of value. It is a constant thorn in his side throughout the proceedings. As another birthday passes for him and friends intend to celebrate, he treats his like a “funeral.”

The concept of legacy is even more literal when Kirk meets his son for the first time. Though told to stay away by Carol, something he does dutifully and without issue, the ravages of age have caught up with Kirk and he feels that he’s missed something important over time: a connection to extend his bloodline; his meaning and purpose. It leaves him feeling worse off then his birthday did.

But Kirk isn’t the only representation of age in the film. The Enterprise herself is old and used up, having seen better days and now being used as a throwaway vessel for trainees. The crew of the Enterprise is slowly being replaced by younger, more vibrant crewmen and women who not only remind them of their age just by existing physically but by quoting rules and regulations to them that they long ago have forgotten due to experience. Scotty himself has a young nephew working with him in engineering who may one day, very likely, replace him.

Besides these physical representations of age, the crew of the Enterprise must deal with Project Genesis, which Khan intends to use as a deadly weapon. Genesis can create life from scratch on a dead world but if used on a living world can eradicate whatever was living there before in favor of new life. It stands as a cruel metaphor for aging once again: that which is old can be replaced again with bigger, better, and healthier alternatives.

Just like in Star Trek: The Motion Picture, the concept of man’s total power and relationship to a “God” is put to the test. With V’Ger, godlike power was explained away with science, the answers to its questions on the essence of existence answered with logic and earthbound knowledge, casting a skeptical eye on religion itself. The Wrath of Khan continues that trend where there is now a world where man can create just as easily as any God theoretically could. See this exchange between Spock and McCoy regarding the consequences of Project Genesis:

Spock: It would destroy such life in favor of its new matrix.

McCoy: Its “new matrix”? Do you have any idea what you’re saying?

Spock: I was not attempting to evaluate its moral implications, Doctor. As a matter of cosmic history, it has always been easier to destroy than to create.

McCoy: Not anymore; now we can do both at the same time! According to myth, the Earth was created in six days. Now, watch out! Here comes Genesis! We’ll do it for you in six minutes!

Spock: Really, Dr. McCoy. You must learn to govern your passions; they will be your undoing. Logic suggests…

Project Genesis remains an existential threat not just because it can be turned into a weapon when in the wrong hands (like, say, Khan’s) but because it changes the dynamics of human evolution and consciousness. What are the effects of aging when new life and new civilizations can be created from whole cloth at a whim? When something old can easily be replaced with something newer and fresher? What kind of legacy does that leave for those left behind in the process?

Star Trek’s continued agnosticism (bordering on atheism; notice Bones’ use of the term “myth” when referring to the Catholic legend of creationism) continues the literal “human” element of the Human Adventure that was just beginning in Star Trek: The Motion Picture. In the world of Trek, humanoid life represents the be-all, end-all of existence and it is up to humanoids themselves to evolve into the next levels of consciousness, not a higher power. Whereas V’Ger, a machine, evolved into a new level of consciousness by discovering who its creator was and the essence of its creation in Star Trek: The Motion Picture, humanity itself now seeks to attain the same fate in The Wrath of Khan by becoming the creator itself.

It was a power previously bestowed upon just the universe but now lies within humanity’s own hands. The consequences of such power are revolutionary but come with a toll that is not beyond someone like Admiral Kirk, who is well aware of the limits of his own existence. The film sets up the concept of birth and death and the in-between period where we anticipate the latter with deeds that provide “meaning” and “consequence.” The power to create new life, be it a baby son on a small scale or a new planet on a larger scale, brings about a responsibility in which future generations are affected. Such power, to men like Kirk and McCoy, is not easily accepted or handled.

Despite the moral complications and philosophical quandaries Star Trek continued going down in its second feature film, The Wrath of Khan was still, at its essence, an action-packed thriller. But it was one that had to be scaled down considerably from its predecessor. Though Star Trek: The Motion Picture was a huge success financially, its ballooning budget and middling critical response led the producers to take a new approach when moving forward with the sequel.

Thus Star Trek began its tradition of treating its films like genre fare, producing them on the cheap to maximize the box office profits. The Wrath of Khan doesn’t look poorly produced but it was certainly made cheap. Visual effect shots from The Motion Picture were blatantly reused, sets were reduced in scale, and a television budget was utilized. The grandeur and Hollywood scope of The Motion Picture, with a budget pushing $50 million, was downsized to around $8 million for The Wrath of Khan. While the more claustrophobic nature of the setting suits the submarine-in-space action sequences, there is a noticeable drop-off in the cinematic feel between The Motion Picture and The Wrath of Khan. Though The Wrath of Khan is considered a classic of cinema, it visually looks like a slightly higher produced episode of the television series it is based on (which is both a compliment and a slight).

And despite the fact that The Wrath of Khan would go on to be the 8th highest-grossing film of 1982 (which is saying something considering the company of films 1982 kept), Paramount Pictures didn’t forgo their approach to treating Star Trek like a horror film in space. Low budgets and cheap sets (if not reused completely later on from more successful Trek television shows) were par for the course. Which made Star Trek less a grand Hollywood machine and more a little engine that could (granted one that made lots of money).

But in the end, as time has gone on, what matters the most is the meat of the story. Star Trek: The Motion Picture has a compelling story and a majestic tapestry of which it is drawn. Despite being denied the same visual luxuries, Star Trek II: The Wrath of Khan perseveres by continuing Star Trek’s legacy of examining the human condition with an equally strong story and subtext that no reduced budget can downplay. For that, it remains a classic and a true sequel.