To anyone who has read almost anything I’ve ever written, it is known by now that I process my life through movies. Recently, I got into a verbal altercation with a neighbor who had begun believing something solely on perception and telling people that belief as fact. In a classic case of projection and shifting, this neighbor had interpreted something another neighbor and I were talking about at a block party (our own histories of emotional and physical abuse in our relationships) as a commentary on past relationships that she had shared with us and began telling the rest of the block about these aspects that both my other neighbor and I wished to keep private about our own lives, except they were also peppered with details that came from her past relationship as if they had happened to me. She attempted to use these lies to define me and make a negative commentary on  the treatment I had accepted from both my families and my partners. It’s hard enough to live through a traumatic relationship but then to hear this past drug up and used against you while being full of lies as an attempt to justify someone else’s actions was entirely too much.

A little background, I’m a devout Kantian, I’ve lived my entire adult life around his principle that lying is categorically a moral wrong because it damages the intrinsic worth of human beings. His ethical constitution on lying always made sense to me. From 2012 to 2019 I never told a lie, and I thusly assumed that this moral adherence would make my word unquestionable. And if it did happen to be questioned it wouldn’t matter to me because I would know that I was telling the truth and be able to find respite in that.

I was wrong, so very wrong. As this person was able to wield the power of a word and hold the capability of bringing my relationships, my livelihood, my reputation among many other incontestable aspects of my being into question, I realized that the objective truth I had cherished and sought to protect for nearly a decade really doesn’t matter if no one believes it. As I found myself confined to my house and constantly looking over my shoulder to make sure I could go outside with my kids in peace while avoiding any subsequent verbal warfare, I, of course, began to think of movies. Two movies, one from the master of suspense himself and one that seems to be an homage to him continued to pop into my head.

Alfred Hitchcock often went into the territory of truth and what others do with it, but maybe never as directly as he did through The Wrong Man. The film comes from a true story that Hitchcock believed to be more terrifying than any fiction he could dream up. The film follows Christopher Emanuel “Manny” Balestrero (Henry Fonda), the dedicated family man and devoted musician working for $85 a week barely able to pay the bills let alone pay off his wife Rose’s (Vera Miles) sizeable dental bills. Manny then decides to see if he can borrow enough against Rose’s life insurance policy to pay off the dental bills while simultaneously bringing ease to Rose’s worry about the bills. Once he steps in, however, he is instantly identified as the man who held the office up twice in a robbery some weeks before, the same man believed to be responsible for several hold-ups in the area. 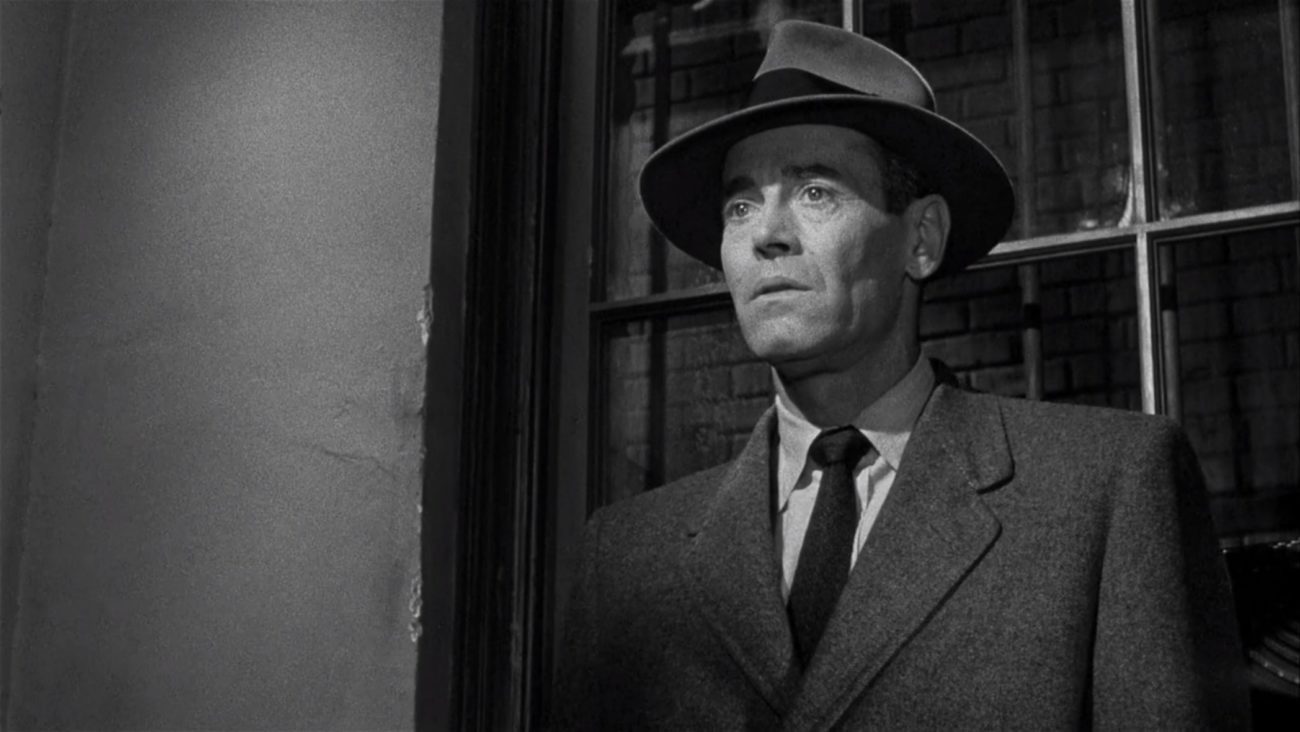 Believing he is just acting as a citizen doing his part to help the police in their investigation and as an innocent man with nothing to hide, Manny accompanies the police to to the sites of the previous hold-ups in the neighborhood in which he lives. Before he can even tell his wife, what is going on, Manny is taken into custody as the person responsible for the robberies, and the more cooperative he is, the guiltier he is taken to be by the police involved with the case. With Rose steadfastly by his side, his attorney goes about attempting to prove his innocence. As so often happens in life, though, the damage done to Manny will not disappear even if he can prove what he already knows, he is innocent.

Alfred Hitchcock explores his oft-repeated theme of mistaken identity in The Wrong Man. This time, though, it is excruciating to watch as Henry Fonda captures Manny’s sweet father, attentive husband, and good citizen trust in this character who believes if he does the right thing, all will work out in the end. As that hope proves more and more difficult to hold onto, as Manny is arrested and detained. No longer free, watching the toll the ordeal takes on his wife, as Manny Fonda delivers an exceptional portrait of hope on the ropes as all that one believes in comes violently crashing down around them. The interesting nuance to this exploration of mistaken identity is the realization that whether the truth is exposed, the damage is already done.

Manny watches Rose, the woman who never doubts her husband’s innocence and becomes wracked with guilt that had they not needed the extra money to pay for her dental bills her husband never would have been in this situation becomes too much to bear. Rose becomes so tormented by her thoughts that she is admitted into a mental health facility where she, like Manny, are distanced from their friends and family both prisoners to both the system and their own lives. Few people seem to believe in Manny’s innocence, their neighbors and co-workers all know of their plight and have casted their doubts against Manny, every idea they have with their lawyer to prove Manny’s innocence turns into a dead end they can no longer live the lives they previously did because such doubt has been cast against their character and who they are believed to be as individuals.

Manny’s plight in The Wrong Man was striking to me as I went through my, admittedly mild in comparison, issue with my neighbor. When you’re the only one that knows the truth, and the onus is on you to prove that truth against the impossibility of proving a negative, living as a whole feels so futile. This idea that the film presents—that proof is attainable and all you have to do is reveal it ,that there is something you can do to prove your innocence, only to take all those actions and it is still not enough—is both infuriating and devastating.

Yet another comparison I made to the film while living my situation out with my neighbor was the similar way in which Henry Fonda’s prison cell, where he was trapped, disconnected, only able to look out while having to stay in, began to resemble my home. It’s a wild feeling when you’re outside playing handball with your family and someone comes onto your home, the only place that you’re think you’re isolated from outside disturbances and rocks your world with a lie. My house began to feel like a prison. I was always looking outside before going somewhere checking for the danger–the next verbal altercation, the next scream coming from her porch. Just as overbearing as the score was in Hitchcock’s The Wrong Man so had the rhythm of my life become in the aftermath of my very own ‘big lie.’

Then there’s the Hitchcockian: the 2005 film Flightplan directed by Robert Schwentke. This film stars Jodie Foster as a bereaved mother who knows she brought her daughter on board a flight with her from Berlin to the United States, but just can’t prove it once her child vanishes. To make matters worse, the reason she and her daughter have boarded the plane is to transport the body of her recently deceased husband, which only serves to incite the suspicion of the passengers and crew, most notably Peter Sarsgaard’s sky marshal Gene Carson, who may have his own nefarious motives for air travel on this fateful trip.

The trouble for Jodie Foster’s character is that she is attempting to prove that her daughter boarded a plane with her to a crowd of people too wrapped up in their own goings on to have paid enough attention to those around them. It is as if she is screaming into the noise of a packed concert praising a lone violin player in the middle of the room. Only a select few are actually working against Foster’s character, they just don’t remember seeing anyone else. The sight of a frantic woman ranting throughout the plane about a child that crew members say wasn’t on the flight manifest is much more easily attributed to her depression and psychoses than an elaborate plot to convince everyone that the child was abducted.

Convincing anyone of something which you are the only person to know beyond a doubt is a mammoth task on its own, but when your only hope is to convince that same group of something that did not happen in an attempt to prove your story as true is nearly impossible. Worse yet in the Flightplan example, the character’s very sanity and grip of reality is questioned based on the fact that she cannot convince anyone of her version of events. Similarly, in my own situation, it was a difficult task to convince anyone of the negative I was trying to prove all while answering the seemingly impossible question I kept hearing of “why would someone make this up?” Despite the fact that my hell on earth with my neighbor has reached a conclusion, I still don’t know the answer to that question. There was no Peter Sarsgaard, that I was aware of anyway, in my bout with my neighbor that had anything to gain from my looking like an incompetent liar to my neighborhood, yet nonetheless this reality befell upon me.

I think that’s what I took the most from these movies and my issue with my neighbor, that you can tell the truth and try to help people and be a good person, and it still won’t matter if someone has it against you. Not only that, but you may also never know what that something against you is. Maybe it’s just that I was an easy target, or the type of neighbor that’s friendly but mousy and just easy to side against when paired with a loud “great when she’s having a good day but watch out when she’s in one of her moods” type of neighbor that lived across the street from me. Hopefully, as my life progresses from the low point that it seems to stagnate at now, I’ll come away with a different conclusion and believe less that objective truth is inconsequential over an easier believed story.

But right now, conviction seems to be only a flightplan for the wrong man.