I don’t need a trip down memory lane, I’m trying to think about why I’m…all I can think about is death; I keep thinking I’m gonna die.

— I think you’re just disconnected, son. You’re not connected, you’re, uh, floundering. Y’know I think it’s because you’re too consumed with yourself.

— Not me, I never had the time…Son, do you remember what the tree was that Eve ate the apple off of in the Garden of Eden, huh?—The tree of knowledge: good and evil. Y’know, you try to learn too much about yourself, try to take the place of God…well you’re banished forever from ever having any peace of mind…Just believe in life, son. Close your eyes; it’ll be over before you know it.

I miss the independent films of the 1990s. My friends and I would go to the video store to rent things that looked cool, or perhaps scour the very early version of IMDb just to find out what other films a director had made, or what an actor we liked had been in (that was about all you could find there at the time). But often it was just a matter of looking at the box on the shelf and making a decision. And unlike how things are now, with it so easy to give up on a film after a few minutes on a streaming service, that meant we were going to watch the thing.

I didn’t realize at the time that we were in the midst of a certain heyday when it came to “independent movies”—films that typically had low budgets and in which there were certain actors that seemed to pop up all over the place: Parker Posey and Steve Buscemi come to mind immediately.

It may have been the latter that drew us to Floundering, the 1994 film directed by Peter McCarthy starring James LeGros.

Of course, the box on the shelf puts other actors to the fore and doesn’t even list LeGros’ name; instead, it markets the film as featuring John Cusack, Ethan Hawke, Steve Buscemi, and Kim Wayans (all of whom have bit parts). Kim Wayans is actually credited on IMDb as “Unemployment,” for example, below the credits for Jeremy Piven as “Guy,” Billy Bob Thornton as “Gun Clerk,” and Dave Navarro as “Drug Kid.” Cusack, Hawke, and Buscemi’s characters at least get names, but each is also only in one scene of the film. At least they didn’t try and plug Viggo Mortensen’s portrayal of “Homeless Man,” I guess.

This may sound as though I am knocking the film, but I am truly not. The point is that it is all about LeGros’ character, John, and his existential crisis. Even if I rented it back in the ’90s because I was some weirdo who thought Steve Buscemi being in a movie was enough for me, Floundering has stuck with me because of its themes and its particular brand of weirdness. 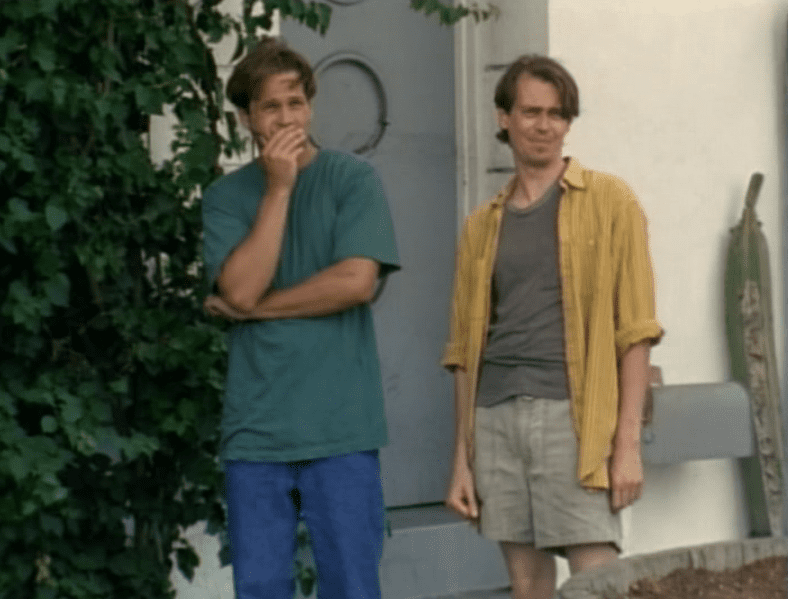 This isn’t an avant-garde arthouse film that plays with strange images; it is a cinematically fairly straightforward movie that finds its uniqueness in its narrative style. It centers on John throughout. I don’t think there is a single scene he isn’t in.

It is also seeped through with his narration of, or commentary upon, the events that unfold. This kind of narrative overlay is often something that I find cheesy, but not in this instance. Perhaps this is because the film is so thoroughly about him and his experience; he isn’t commenting on action in a way that breaks the fourth wall, but there is rather no fourth wall to be broken here—we are with him and seeing things from his perspective from the get-go.

The context is that of the Los Angeles riots in 1992, in the aftermath of the Rodney King verdict. Though real-life police Chief Daryl Gates is replaced by fictional Chief Merryl Fence, the film does a good job of embodying the ethos of the time. Of course, I didn’t live in L.A. then and was basically a child, but there was certainly a feeling in the air that things were erupting; the world was burning. We saw that video of King being beaten to within an inch of his life. We watched as the trial proceeded, and then cops were acquitted. It may be hard to fathom if you are a young person now, who has seen videos of the police straight up killing Eric Garner, Tamir Rice, and others, but it felt like something was happening. And something was: a riot that left 63 dead and 2,383 injured.

But rather than that feeling like anything definitive, it was more of a question: what is happening, and how do I fit into it? This is what Floundering is about, through the lens of our friend, John. The racial tensions are exploding; the societal tensions with deep historical roots are exploding, and here is John caught up in the thick of it, even having a gun pointed at his head at a traffic stop at one point for no truly discernible reason (is it because he is white?—the question isn’t even really posed).

Yet, John is deeply sensitive to, or in tune with, those injustices that surround him. When a black man who offers him crack starts ranting about the revolution that is already happening, more than anything John seems to want to be that optimistic. Or perhaps he just doesn’t know where he stands; when asked what side he is on, his response is to accept the crack. Yet, he gets pissed enough at Chief Merryl Fence on his TV that he aims a gun at it (and at least fantasizes about killing the man, later). Or perhaps ‘pissed’ isn’t the right word—maybe better to call him disgusted. He’s in that ambiguous state where none of the responses seem to make sense. With no career and no family, other than a drug-addicted brother (Ethan Hawke), he’s left to try and make sense of the world in light of all of the ways in which it doesn’t. He feels like he’s going insane because of it.

He’s unemployed, and when he goes to the unemployment office Kim Wayans’ character laughs at him even as he seems to be in good faith looking for work. But then she has to inform him that, due to an accounting error, his benefits are not only up, but he owes them money (“God, I hate when this happens”).

His “girlfriend”—with whom he takes pains to tell us he is hopelessly in love, no matter how badly she treats him, going so far as to caution us against the very idea of “love at first sight”—doesn’t understand why he has a problem with her having sex with other men, or seem to have any interest in being there to support him emotionally (I take the latter to be the stronger worry, for what it’s worth). Without those things to focus you (a job, love, etc.), what are you left with?

Who am I? And what is my place in the world?

As John’s (dead) father tells him, in what might be the central scene of the film, he’s floundering. 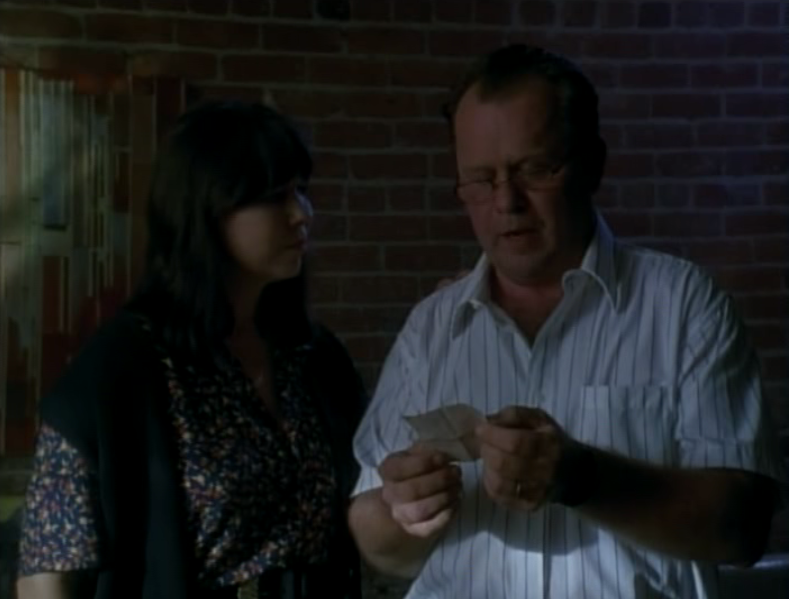 His life circumstances are actually worse than I’ve gone into, and there are a number of plot points I am not hitting, but that’s because the point is elsewhere: this is about his struggle to be in the world. And this continues to feel very relevant some 25 years later: how can I be OK when the world is so fucked up? How can I find a place in it? Could one even accept an apparent chance at love, or would one be compelled to grab a gun to go try and take out that fucker who has been all over the TV? And if you did, would his security perhaps actually turn to help?

The reality of many events in the latter part of Floundering is subject to question, with John waking up in his bed (or on the sidewalk) more than once and the fact that we’ve known that he’s suffered from insomnia from the beginning of the film. I’m not sure exactly what really happened and what didn’t, and the film doesn’t place a lot of emphasis on that question, either.

Rather, it lives in the space of ambiguity, both in terms of its own narrative, and (even more so) in terms of what John is doing with his life. This is an existential drama. We are condemned to be free, with each moment of choice implicated in what Jean-Paul Sartre called anguish. To choose is to imply that I have made the right choice, and if it is the right choice for me, it must be the right choice for anyone. How can I decide when my decision thus implicates all of humanity? And, yet, I must, since indecision is itself a kind of decision.

If I’m John, I flounder in the face of the difficulty, like a fish out of water. But where is the water, and is it clean? If it’s dirty, should I swim in it anyway?