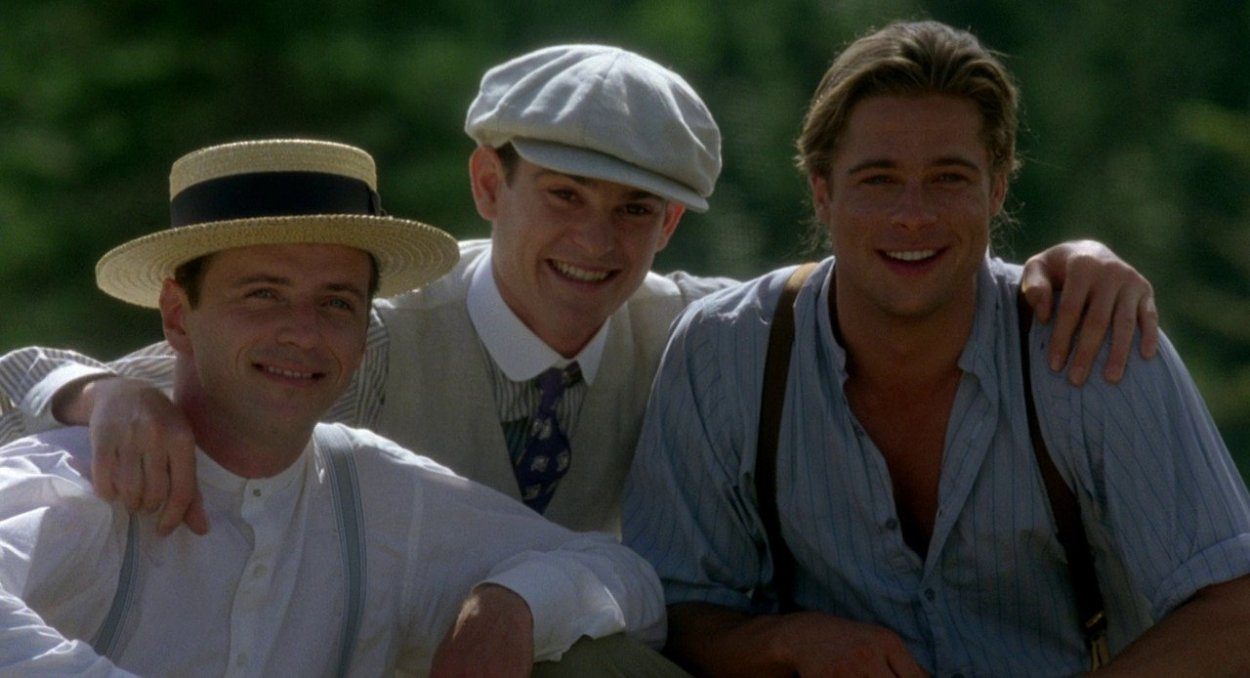 Looking back to 1994’s Legends of the Fall from rock-steady filmmaker Edward Zwick, a multitude of its traits match those of classic film melodramas. Tim Dirks, the founding writer and editor of AMC’s Filmsite, has a lengthy description of melodramatic plotlines that is quite fitting for much of Legends of the Fall.  His definition states:

Some may read that virtually clinical definition and look down on movie melodramas as weepy or wimpy. They would be missing their universal redemptive power. Many may see Legends of the Fall as merely as a star vehicle for the then-emerging Brad Pitt. The remembrance it truly deserves is of being a prime example of melodrama done with ardent creative commitment and brawny will that does not lose a hair of its emotional weight through epic storytelling. 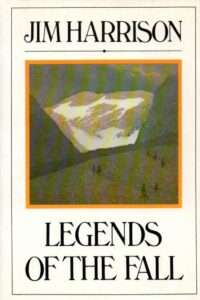 Based on Jim Harrison’s acclaimed 1979 novella of the same name, Zwick’s film chronicles the fictional story of the Ludlow lineage during the first quarter of the 20th century. The tumultuous family history being recounted by One Stab, a Cree Native American and loyal friend played by Gordon Tootoosis, begins to paint the ominous tale that follows right from the film’s opening lines: “Some people hear their own inner voices with great clearness and they live by what they hear. Such people become crazy, or they become legends.”

With that parable in mind, every wisp of wind carries some timbre of a guttural growl of passion. The impactful aural calls are bolstered by the grand visuals. Legends of the Fall is a movie of soulful madness that is heard as much as it is seen.

After years of witnessing the military-led atrocities against the Native Americans of the American West, Army Colonel William Ludlow (Academy Award winner Anthony Hopkins) gives up his saber to build a homestead and raise a family in rural Montana. His stern bootstraps are complemented by the trusted presence of One Stab and the hired hands of Decker (Paul Desmond of Glory) and his wife Pet (Tantoo Cardinal of Wind River). Shot in the Alberta’s Ghost River Wilderness Area west of Calgary near Banff National Park, the pastoral setting breeds toughness. 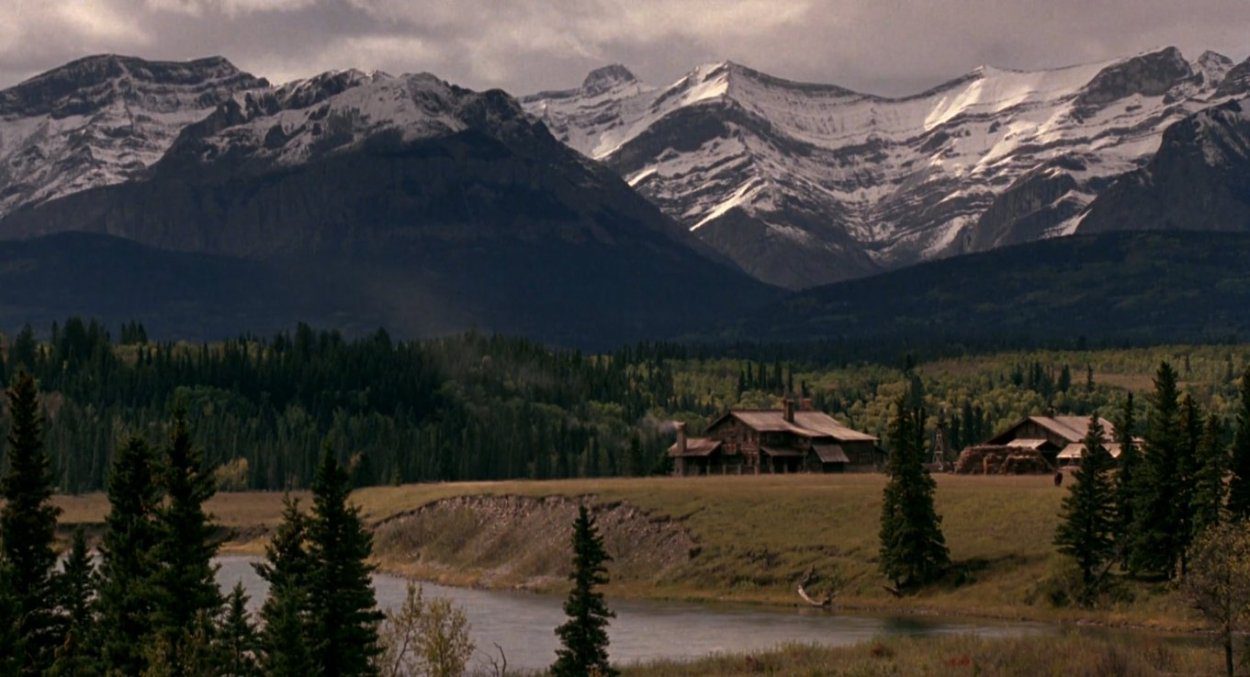 William and his well-to-do wife Isabel (Christina Pickles of St. Elsewhere fame) have three sons, Alfred, Tristan, and Samuel, played by Aidan Quinn, Pitt, and Henry Thomas, respectively. Each personifies a different archetype of vim and vigor. Alfred is the stalwart one of consummate values, Samuel is the idealistic dreamer, and Tristan is the proverbial bad boy and his father’s favorite because of it. When Samuel brings home his cultured and beautiful fiance Susannah Fincannon (then-rising starlet Julia Ormond), the melodrama truly elevates along the lines of those aforementioned “crises of human emotion, failed romance or friendship, and strained familial situations.”

Susannah’s beauty and presence captivate all three Ludlow sons on the brink of their joining the Canadian forces during World War I. Tragic losses sustained during the Great War beset those who wait at home and scar the men who returned. Coveted by all while yearning with her own desires is the conflicted Susannah, like a prize to be won. The levels of competing affections play havoc with the bonds of the Ludlow family.

The central furnace remains Brad Pitt as Tristan. The GIF-glorified screen introduction of his beaming smile underneath a wet and bouncing hat tip is the kind of heat that sears matinee memories. The actor, a fan of the Harrison novel, was at the early peak of his powers and was Zwick’s early choice to play this lead role even before his stardom rose to topline this movie. The future A-lister and Oscar-winning producer joined his fearless leader on a lovingly nostalgic feature-length commentary track on the disc editions of the film. It’s a stellar listening experience of reverence and observation.

The Tristan character’s embrace of Native American influences gave Brad Pitt latitude to craft a showy and exciting edge. One Stab’s narrates, “He was a rock they broke themselves against however much he tried to protect them,” and the visceral drama hinges on Tristan. Pitt thrived in combining reckless abandon and red-blooded charisma into every stare and scream. He was the draw that brought this movie a five-fold return on its budget.

Pitt’s might have the unquestioned lead role as the prodigal son, but Legends of the Fall endures as a bracingly strong story of brothers. Legends of the Fall filters much of its romantic drama, levels of privilege, social commentary, and character maturation through sibling rivalry. Aidan Quinn, who went on to other romantic roles including Practical Magic, is an anchor all his own as the straight-and-narrow foil to Pitt’s hair-trigger savagery. It would be easy in a simpler story to make one brother or Hopkins’ father a cheap protagonist. Instead, all carry themselves and are treated with a level of constant nobility. Julia Ormond is regally fetching as an aura around them with her own layers. 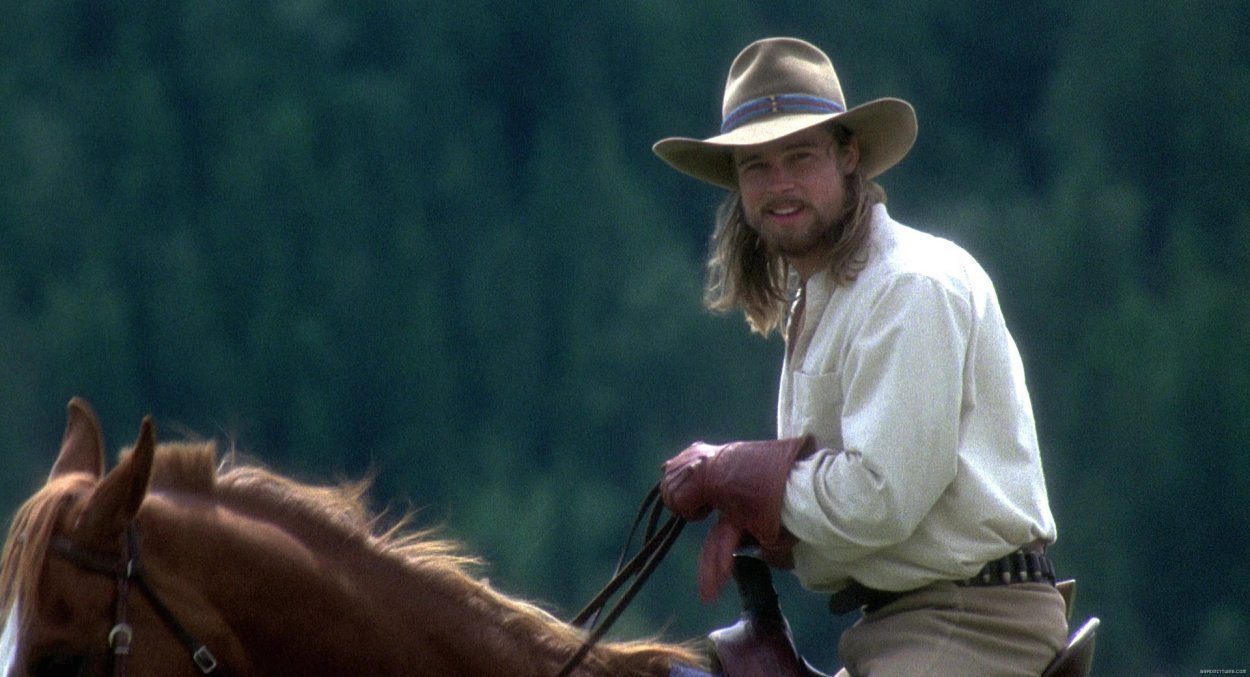 Fateful choices and unspoken truths become the true enemies. Once again, in true melodramatic fashion from the Dirks example, the mounting sins and misgivings committed by all of the core characters are often born from tragedy and repression. Harrison’s novella often uses narrated letters as character asides. Zwick extracts those expositional moments in montage to allow the camera, editing, and body language to present the storytelling. In doing so, this whole film moves with a confident and graceful sway often matching the churning waters, sprinting stallions, and waving foliage of its setting. The serene years of peace wash over you, while the bursts of feral violence are equally gripping.

There has never been a bad-looking Edward Zwick film. Nothing he does is ever halfhearted. His films are all richly detailed with endless scope.  “Rustic sumptuousness” would be the taste notes on the wine bottle label for Legends of the Fall.

Cinematographer John Toll won the first of his two consecutive Oscars (Braveheart afterward) for his towering work capturing that vista-size scope, and rightfully so. The moist northern light of the Canadian magic hours bathe the intrusive mud and textured woods of production designer Lilly Kilvert’s genuine and recreated locations with illustrious beauty. Next to that of the star and director, Toll and Kilvert share a feature-length commentary track offering a rich look at their creative solutions. It is a rare treat that a cinematographer and a production designer get that kind of space to present insight. Their spotlight is earned. 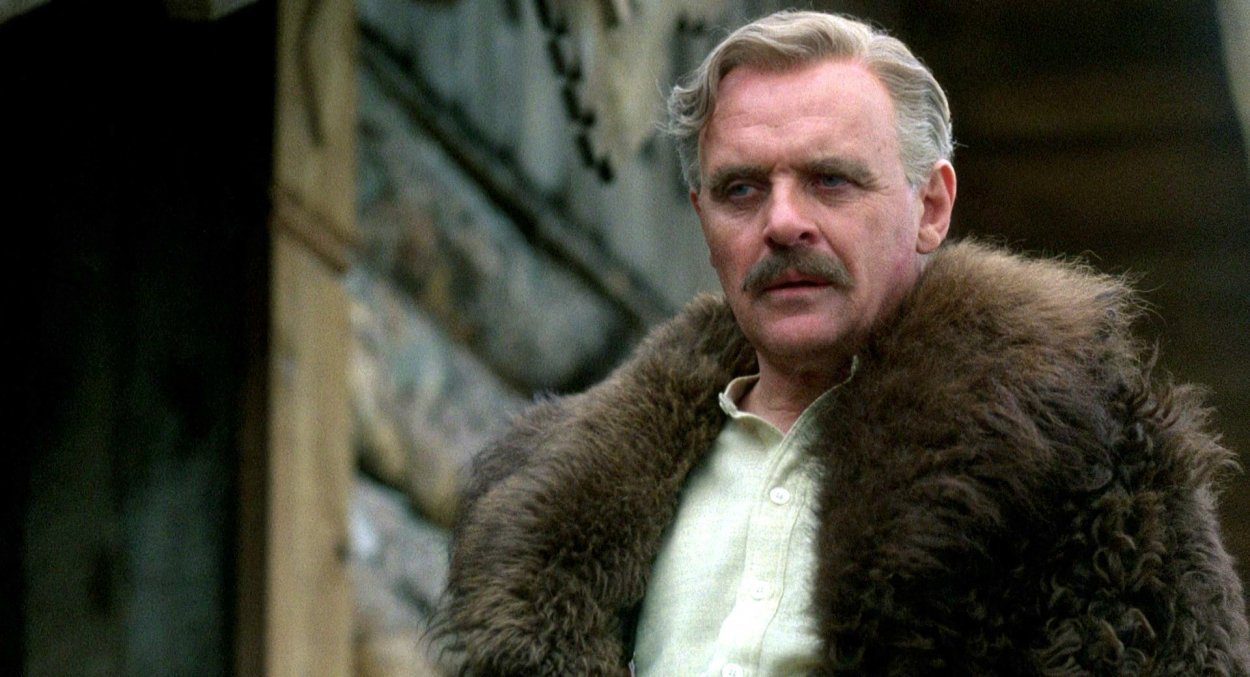 The kicker is that Legends of the Fall honors the final culminating needs of melodrama in bold fashion, namely the “resolute endurance, sacrificial acts, and steadfast bravery.” There are heated battles against god and destiny where Hopkins’ rancorous gravitas galvanized Pitt, Quinn, and Ormond and their character’s trajectories. There is a desire to be needed and a need to be desired. Everyone who seeks to lose their madness, clashes with that of another or one of natural origin.

Throughout the entire film, the most fervent fuel for the “resolute endurance” is the late James Horner’s stirring musical score. This writer ranks it as a career-best over Titanic, Braveheart, and any other contender. His span of themes mirror the resting-and-raging-bear dichotomy of the lead protagonist. Horner’s wood flute and fiddle flourishes are the soul of this movie’s poignant magnetism. The rousing punch of his score lifts the tone to a mythic level. Without his contributions (available as an isolated audio track on the disc releases), the inherent swell and sweep deflate rapidly.

When you think about it, Hollywood doesn’t make epic melodramas like Legends of the Fall much anymore, which is a damn shame. They were a mid-budget staple in the 1990s until it peaked with James Cameron’s massive Titanic three years later; that film seemingly exhausted all of the oxygen, thunder, and money possible for this genre. Entries are rare and considerably more expensive with required digital help since that decade. Just ask Martin Scorsese on four films (The Irishman, Hugo, The Aviator, Gangs of New York), Baz Luhrman with Australia, and even Zwick himself for The Last Samurai. All of those historical epics had budgets tipping over $100 million, and some saw diminishing returns. Derek Cianfrance’s modest and underrated The Light Between Oceans is one standout comparison cut from the same melodramatic cloth. 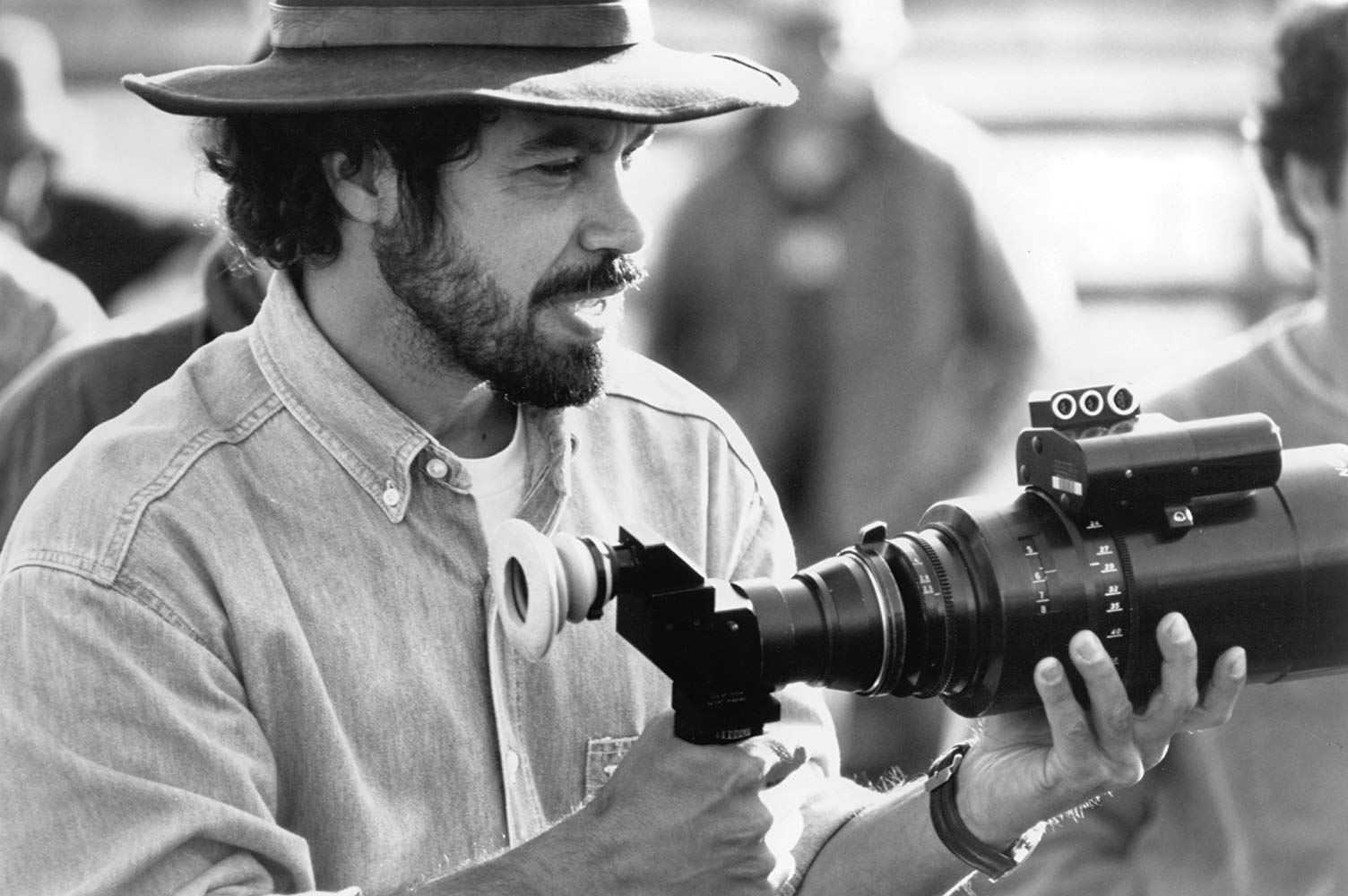 Made for a scant $30 million without a green screen or visual effect in sight, Edward Zwick’s finished saga stood tall as TriStar Pictures’ Christmas tentpole and awards contender in 1994. This was a passion project the Glory director fostered for 17 years to channel the likes of David Lean. He and the film wholeheartedly succeed. That kind of heroic prowess is a class of filmmaking that is sorely missed today. New audiences deserve to be swept up more often by the right dedication and talent responsible for experiences like Legends of the Fall. Someday, another sleeping bear will awaken and set our hearts on fire.