Welcome to my column dedicated to the appreciation of physical media supplements: Feature Presentations. The goal of this column is not to say whether a film is good or bad and worth picking up or not—I would like to highlight the discs that go the extra mile and provide film fans with enough tasty tidbits to satisfy even the hungriest of cinephiles. With all that out of the way, today’s article will focus on Kino Lorber‘s release of Revenge of the Ninja. 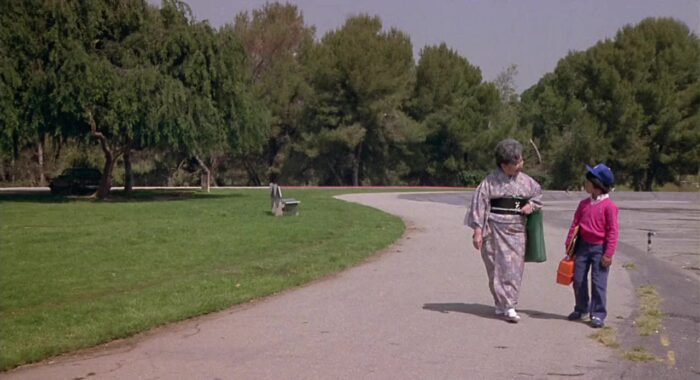 After a hard day, week, month, or year of work or school or anything in between, everyone needs a way to decompress. Some people healthily handle stressors by hitting the gym, while others alleviate the effects of stress by treating themselves to ice cream. Each person is different, and how they handle such situations can be a costly venture. For me? My vice is buying DVDs and Blu-rays.

Before Covid-19 was wreaking havoc and shuttering brick-and-mortar stores for an extended, if not permanent, period, it would be a safe bet I was at my local video store. Not to get too personal, but the funds I bring home cannot sustain a weekly spending habit of buying movies. That wouldn’t stop me from going, though. You might ask why I would go if I knew I couldn’t afford anything. I’m glad you asked.

Surrounding myself among rows and rows of physical media discs centers me. I can’t explain why this is the case, but I equate the feeling to someone who finds solace in a library. The feeling I get is tranquil as I browse a wide array of selections, looking for something that might strike my fancy. From DVDs to TV box sets and 4k discs, there’s something worth adding to my collection every visit. Each visit, I needed to practice restraint, understand the funds in my bank account, and ask myself what I truly wanted to own.

Since the pandemic temporarily closed my video store, and I am not willing to risk venturing out just for movies, I have found myself utilizing online stores as an alternative to decompress. In my opinion, shopping online isn’t quite the same, but it has helped me through the dark times that come with the world pausing.

What the pandemic has opened me to is the various editions of physical media out there. From different regions to limited editions, there are options a-plenty out there for the film connoisseur. Since the pandemic began, I have immersed myself within boutique labels and specific editions of a physical media release to take into account ON TOP of buying something that interests me. There are plenty of releases out there that look good, but the film doesn’t, and the bottom line for me is, the packaging may be good, but I should want to watch the movie as well.

As the years have waned on, I found myself not interested in recent, big-budget films. Call me an “old man yelling at the clouds” if you must, but my taste in cinema has evolved into underseen and quirky offerings. Whether it’s an Exorcist ripoff like Beyond the Door or Vinegar Syndrome‘s Homegrown Horrors Volume 1, these are the types of releases that pique my interest nowadays. Digging out and dusting off relics of cinema’s past is right up my alley. 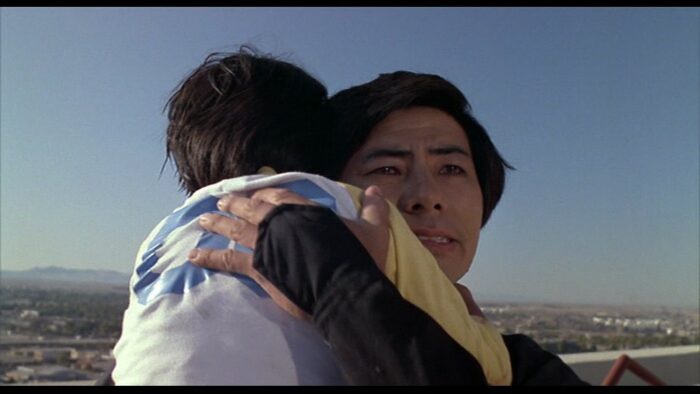 Horror films appear to get preferential treatment for extravagant releases, but not to be outdone is the Martial Arts genre. Starting with last year’s Criterion release of Bruce Lee: His Greatest Hits, I have found myself drawn to digging into what Asian Martial Arts films have to offer. Sure, I am familiar with the Bruce Lee classics; I’ve seen a couple of the Shaw Brothers films and checked out the American Ninja franchise—I just haven’t gone as deep as I would like for this genre. For me, though, my favorite films that deal with martial arts lie within the Ninja franchise from Cannon Films—particularly, Revenge of the Ninja.

I distinctly remember watching the film multiple times as a kid. Long before I knew who Sho Kosugi or Cannon Films were, I just knew that Revenge of the Ninja appealed to my sensibilities. Watching Revenge of the Ninja, I knew I was watching something special. The final act, featuring a ninja-on-ninja final battle in a skyscraper, delivered everything an eight-year-old could want. Sometimes, films from your childhood stick with you through adulthood, and Revenge of the Ninja was just that for me.

Within the past year, Kino Lorber had a sale on a large selection of their catalog. I, always searching out physical media releases, hit up their site and found a handful of discs to add to my collection. Lo-and-behold, one of those films I stumbled across with Revenge of the Ninja. I didn’t even care if the disc was barebones or loaded with bonus features; Revenge of the Ninja is a film I wanted just for the movie itself.

To my surprise, Kino Lorber took care of the film and provided a handful of extras to go along with the feature. Director Sam Firstenberg and Stunt Coordinator Steven Lambert come together to record a commentary track. I will admit, this commentary disappointed me. As someone who enjoys the hell out of this film, I found myself wanting to know everything I could about Revenge of the Ninja. In some ways, I learned a lot about the film, but Steven Lambert overpowers the commentary with stories about himself on set.

I’m not opposed to a speaker detailing a crew member’s time on a film set, but every time Sam Firstenberg would provide a factoid, Steven Lambert would divert the conversation to focus on his work in the film. I appreciate what Lambert was able to do within the film, but I wish he allowed Firstenberg more room to discuss other aspects of the production.

The other feature that appealed most to me was an optional introduction by Sam Firstenberg. Hearing him speak by himself was welcome, even if only for a few moments. Was this added after hearing how the commentary came out? Whether it was or not, I appreciate the addition. Rounding out the features, you have a collection of stills and the theatrical trailer.

There you have it! Is Revenge of the Ninja a great film? Certainly not! Is it a good time? Absolutely! If you’re in the mood for a movie that balances ninja action with a dose of self-deprecation, you could do worse than Revenge of the Ninja! Made during the height of Cannon Films’ powers, Revenge of the Ninja is what you expect and would want from the minds behind the Death Wish sequels or any Chuck Norris film of the ’80s. Add on to that a small but welcome supply of extras courtesy of Kino Lorber; you get a disc that wholeheartedly gets my recommendation!