Welcome, everyone! I hope all is well! Let me start by saying that I love physical media. I’ve already mentioned this in the past, but I must continue to say it. Boutique labels like Shout! Factory, MVD, Arrow Video, and others work to create physical media packages that can satisfy all cinephiles. As someone who has a substantial collection of DVDs, Blu-rays, and 4K discs lying around, I wanted to dedicate a column to these labels that strive for excellence in whetting our appetites. On this first episode of The Physical Media Chronicles, I wanted to show my appreciation for the work put into the extras and what cinephiles can expect in return.

John Carpenter is one of my favorite directors of all time, and he has always been a director who’s involved with a well-put-together media package. Putting together a generous selection of extras is not solely up to him, but he continues to show that all are welcome to enjoy his filmmaking process. It’s only fitting, then, to lead off my first episode with The Horror Master and one of his lesser-known works. While we’re at it, let’s throw in a Sho Kosugi film as well! So, sit back and enjoy as I dive into Shout! Factory’s release of Starman and Arrow Video’s release of Pray For Death.

John Carpenter is known as The Horror Master for a reason. It’s not enough to have Halloween under his belt—tack on to that The Fog and The Thing, and you have an auteur in the horror genre. So, what would the next logical step be? Why, romantic science fiction, of course!

Starman tells the tale of an alien, played by Jeff Bridges, who lands on Earth and assumes the identity and look of a woman’s (Karen Allen) deceased husband. The movie follows different tropes seen throughout film history: love story, road movie, government hunts an alien film—it’s all there in one, neat package. What we have are two great performances handled nicely by one confident director.

Even with the talent in front and behind the camera, Starman gets left behind when John Carpenter’s filmography comes up. By no means is Starman bad; it is just a simple, sweet movie and stands in the shadows of culturally-significant films that came before and after. Sometimes, when a film comes out and lands lightly instead of making noise, there is the potential for that film to fall through the cracks.

And this is where boutique labels come in to save the day.

Shout! Factory took it upon themselves to upgrade what could have been a bare-bones release and instead released a Starman Collectors Edition disc. What that means is Shout! decided that Starman should get the attention the film rightly deserves. As is customary on most John Carpenter releases, he recorded an audio commentary along with Jeff Bridges. Granted, it is not unusual for Carpenter to record an audio commentary—it is a bonus to hear from Jeff Bridges. I believe this is the same commentary that was released overseas, but for the United States, this is a new and welcome listen. John Carpenter has always been adept at handling a film commentary, whether by himself or with others. Having him guide Jeff Bridges through the film’s runtime works in the commentary’s favor as Carpenter fills gaps in time with filmmaking technique and allows Bridges to have moments peppered throughout to add his perspective. Bridges and Carpenter’s comments are not Earth-shattering by any stretch of the imagination; it is pleasant and welcoming—allowing us to hear two pillars of film reminiscing about the times they spent together. 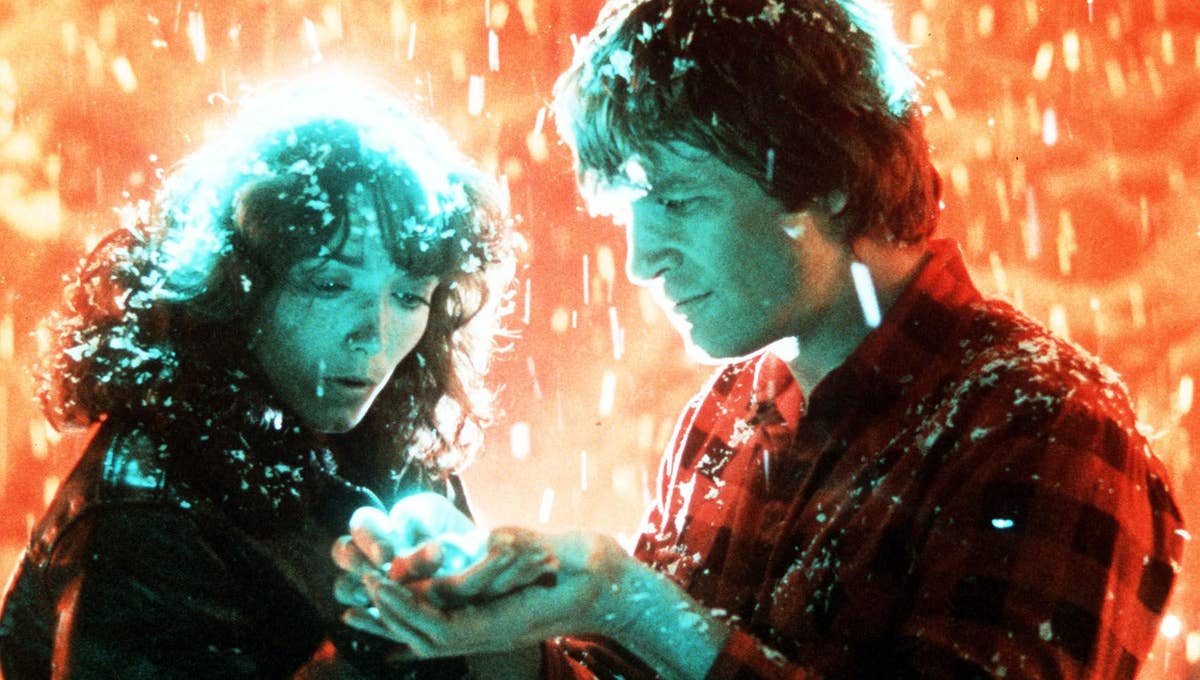 Beyond that, we have two behind-the-scenes documentaries: one recent and the other shot during the film’s production. The older documentary features interviews with Bridges, Carpenter, Karen Allen, Charles Martin Smith, and others. More of an EPK-type featurette, we get to see the cast and crew of Starman perform their magic in front and behind the camera. Composed primarily of talking-head interviews, this vintage making-of doc has the main participants of the film talking about the enjoyment of making Starman—including the only appearance of Karen Allen on the disc.

The newly-commissioned documentary, titled They Came From Hollywood: Re-visiting Starman, features Bridges, Carpenter, Smith, and Script Supervisor Sandy King-Carpenter. Clocking in around 25 minutes, we get a more in-depth look at the making of the film. Touching briefly on the screenwriting credits, the production, and the nomination that Jeff Bridges received from the Academy Awards, this short but to the point documentary covers as much as one would hope for its limited runtime.

To round out the set, Shout! Factory compiled the teaser and theatrical trailers, along with a handful of TV spots. While some may not care about these inclusions, I have always appreciated having these relics on disc. Yes, I could go to YouTube and search them out, but, as a completionist, these are bonus features, and I appreciate everything provided, even if it’s something small. Lastly, there is a collage of movie posters and photos shot from the set, including some from Jeff Bridges’ personal collection.

Overall, this is a welcome set for a film we can welcome home. Shout! Factory did Starman justice and is a welcome addition to my collection.

When the mood strikes, you need to watch a film just for enjoyment. Instead of getting wrapped up in a confusing plot with a multitude of characters, sometimes it’s best to pop in a “chop-socky” film and turn your brain off. There’s plenty to choose from, but I was able to pick up the Arrow release of Pray for Death, starring the one and only Sho Kosugi.

Maybe not a household name to most, Sho Kosugi lives long in my heart as he spearheaded my favorite ninja film of all time, Revenge of the Ninja. Top that off with the other films in the Ninja trilogy—Enter the Ninja and Ninja III: The Domination—and Sho Kosugi is one whose filmography I will follow for life. Showcasing his martial arts abilities with the cornball cheese of 1980s ninja films, I feel Sho Kosugi never got the props he deserved, as his works have fallen by the wayside when people mention their favorite ninja films.

And one might assume that Sho Kosugi’s work would become a relic of its time and fade into obscurity. Thankfully, Arrow Films stepped up to the plate and looked out for us film nerds. Restoring Pray for Death with a high-definition transfer and two (count ’em, two) different versions: R-rated and the bloodier, unrated version. As I have stated before, this column is not about the A/V quality—I’m more interested in the features. It has to be said, though, that Arrow made Pray for Death look as good as it probably ever has. 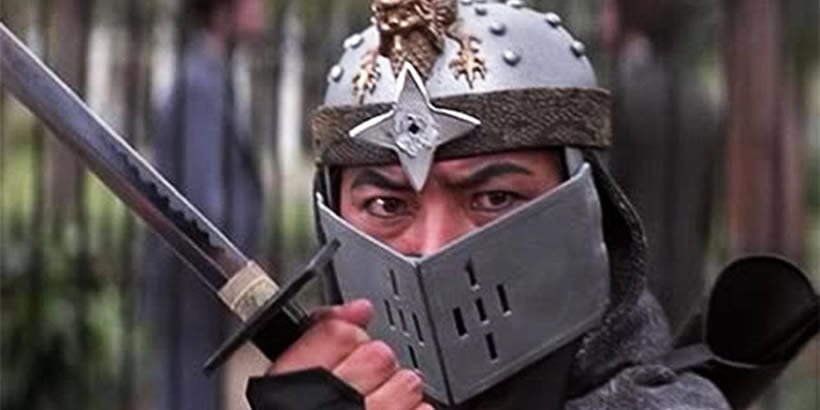 On the features side, we get two different interviews with the man himself, Sho Kosugi. The first interview from 1985, around Pray for Death’s theatrical release, finds Sho Kosugi interviewed for a public access program. Geared towards the martial arts, Sho provides a light and friendly tone with the interviewer as Sho discusses his early life and history with martial arts. We get to see Sho perform a demonstration at the New York City premiere for Pray for Death, and that is worth the price of admission.

The other interview we get is from 2015 and plays as a nice contrast to the earlier interview. Sho goes over information that he had mentioned before but is able to add additional details about his life in the 30 years since. Especially watching the interviews back to back, Sho seems to appreciate his life and career. If I had one complaint, it would be that this interview ends abruptly—only to conclude on the Rage of Honor disc. As I do not have that release, I haven’t seen the second part of Sho Kosugi’s 2015 interview. If I get my hands on the Rage of Honor disc, I’ll make sure to offer my thoughts on part two.

Aside from the two interviews, we get a handful of trailers for Sho Kosugi’s films and a booklet with essays from James Oliver, Warren Chaney, and Sho Kosugi, plus reversible artwork. All and all, Arrow Video rescued Pray for Death from obscurity and provided us fans with a release that we can be proud of as we revisit this underrated classic again and again.

Arrow Video and Shout! Factory have proven that they care about film, those involved with making it, and the collectors who enjoy every feature offered. Now granted, the releases of Starman and Pray for Death will not set the physical media world on fire; it goes a long way to show that boutique labels care about more than just being in the black. The care and attention to detail is appreciated and goes a long way to show that physical media is not dead, just flourishing in a niche market.

So, there you have it. Two wildly different films, supplied by two boutique labels—each hitting it out of the park for movies that may not appear to deserve the treatment bestowed upon them. Do you have either of these titles? What were your thoughts on the treatment that Shout! Factory and Arrow Video provided?

Since we kicked off The Physical Media Chronicles with two smaller releases, should I continue with this trend or dig into one larger release? Let me know your thoughts and what you’d like to see reviewed.