Each month, dozens of new films are added to the Criterion Channel. While the rich selection of feature-length classic and independent films obviously gets a lot of well-deserved attention, I wanted to shine a little light on some of the short films. I believe that shorts should get a lot more attention than they typically do—they are breeding grounds of experimentation and non-traditional storytelling, and are often important outlets for marginalized voices.

December featured another strong slate of films that were added to the channel, headlined by multiple films from directors Elisabeth Subrin and Criterion Channel veteran Lynne Ramsay. The slate was strong enough that I ended up including a few more recommendations than I usually do (and easily could have included even more).

While this article is exclusively focusing on short films that are added to Criterion Channel in a given month, I’m also keeping track of all of the short films I watch in monthly Letterboxd lists, whether on Criterion Channel or elsewhere. I’ve listed the streaming service that I watched them on, with the films that I talk about in this article marked in the notes with two asterisks. Feel free to follow me and the lists on Letterboxd and feel free to reach out to me on Twitter if you want to discuss any of the short films. Without further ado, let’s get into the films! 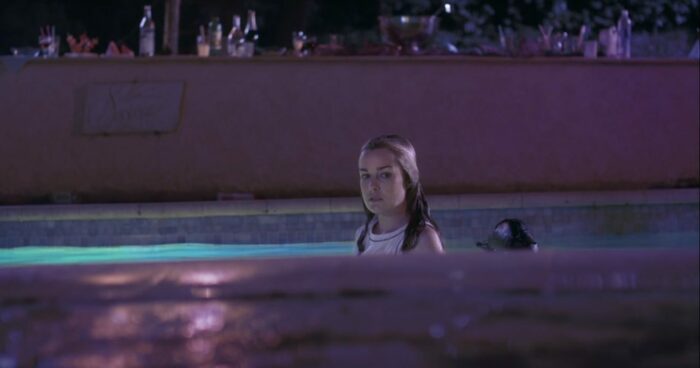 I wasn’t sure about Social Butterfly, but the mystery of the short kept it in my mind for several days after watching it and had me rushing to see if I could find interpretations of it, which are generally signs that I should write about it! The short follows an American woman (credited as Margaret; I don’t believe that she says her name in the short) who crashes the 18th birthday party of a French girl named Chloé. She tells the other guests that she is Chloé’s cousin, casually pickpocketing and stealing as she goes along until she encounters Chloé herself, who is obviously not fooled by Margaret. Chloé is also not particularly enjoying the party, especially with most of the male partygoers thinking they’ll get to sleep with her.

Maybe the detail that keeps me coming back the most to the short is that while Margaret isn’t supposed to be there—she’s at least a decade older than everyone else at the party, doesn’t speak French, and doesn’t know anyone there—it doesn’t appear that her coming to the house was by chance, nor does it seem like she exclusively came to steal. The short opens with her confidently walking up to the house, walking inside, and then seeming annoyed that there is a party going on. She intended to go to that location, but the reasons why are unclear (I had a theory that she was secretly Chloé’s mother, but that seems unlikely given where the short goes).

The title seems to be something of a misnomer since Margaret seems a little too abrasive to be described as a social butterfly. One theory I have is that the term is used more to describe the way she goes through life, flitting around inconsequentially like a butterfly from one place to another. The mystery of who she is and why she is there is central to the film, and while it is never answered, it seems unlikely that neither she nor Chloé will be the same after their encounter.

Jennifer Reeder makes her debut in the Criterion Channel short films recommendation article despite being one of the inspirations for it. I started keeping track of the short films I watched one month before writing the first entry in this series, and if you look at that very first Letterboxd list, Reeder’s films, which at the time were new to the channel, are some of the only ones that I actually watched on the channel that month. Anyway, just a fun fact that I wanted to share before getting into the film!

The short film is almost surreal in its juxtaposition of incongruous images. Entirely wordless, the film follows the journey of a woman wearing a wedding dress dragging a fur coat and suitcase through a dusty path in the wilderness. As in Social Butterfly, we never discover who our protagonist is or what she is doing during her seemingly Sisyphean task, although the red liquid oozing from the bag seems to give us a good idea. Beautifully shot, the short feels timeless in a way that it could take place over 100 years ago, if not for the distant city skylines that plants it firmly in the present. 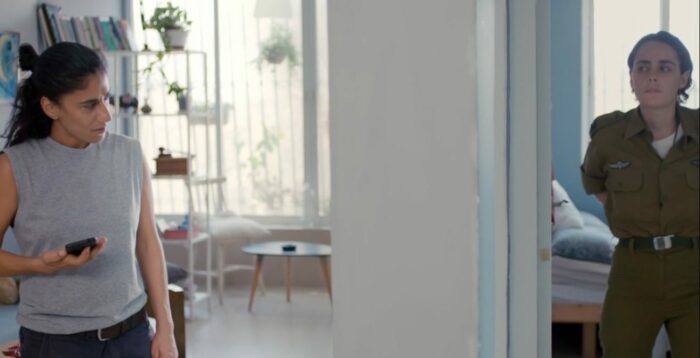 I think that Polygraph was my favorite short film added to Criterion Channel this month. It tells the story of a lesbian couple living in Israel. The film starts with the pair having sex, which is interrupted by an air raid siren. The women decide to keep going, despite the obvious risk to their safety. It is a strong statement to open with and that, sadly, is the high point of their relationship for the rest of the film—they would rather die than interrupt their passion for one another.

What apparently hasn’t been much of an issue up until this point in their relationship, however, is that the two protagonists come from different sides of a massively complicated and fraught conflict: Yasmine is Arab and Orr is an Israeli working for their security forces. The titular polygraph is mentioned in just a single line of dialogue—Orr is taking it the following day as part of her security clearance—but the idea of revealing the truth is a major theme of the film. Yasmine, who has never even been allowed over to Orr’s apartment for security concerns, finds out that Orr is going to have to report their relationship to her superiors, a fact that she is understandably upset about. Additionally, Yasmine’s sister doesn’t know about their relationship and, as someone actively living on the West Bank, is (also understandably) upset to learn that her sister is with Orr.

The slow dissolution of the relationship is riveting to watch. Much of the conflict unfolds during a six-minute-long scene in Yasmine’s apartment that felt reminiscent of the long apartment scene in Godard’s Contempt. The dissolution is subtly highlighted by framing the two actors so that they are visually separated by vertical lines, even when they are only a few inches apart from one another (you can see one such instance in both the picture above and the cover photo of this article). The conflict between the two, and by extension, the region as a whole, is messy and complicated with no easy answers. Orr would jeopardize her career by not telling the truth about Yasmine, but their relationship, which obviously means a lot to both of them, is also in jeopardy. I would love to see Polygraph get adapted into a feature-length film. 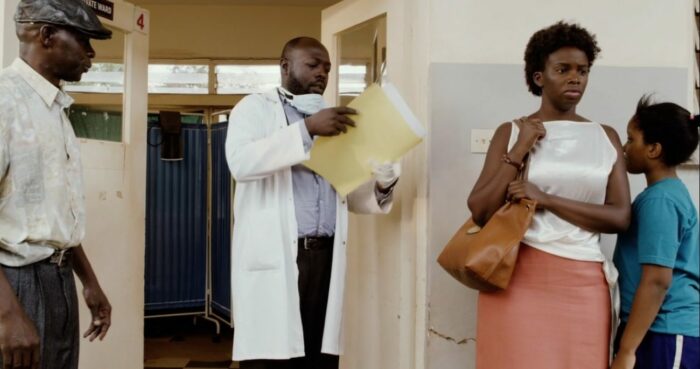 Family Tree centers around a young Ugandan girl named Nagawa. At the beginning of the film, Nagawa is a somewhat arrogant child: her father is a member of parliament who, Nagawa brags, “uses an airplane more than a bus.” When her father is critically injured in a car crash, Nagawa and her mother go to the hospital to see him, where it is revealed (and this is a spoiler, so beware if you plan to watch the short) that not only does her father have a secret family, said family is actually Nagawa with her mother being the “other woman.”

The twist is expertly revealed. When they reach the hospital, they converse with Nagawa’s grandfather (who refers to Nagawa as his granddaughter, so at the very least he knew about them in advance) and the doctor, and nothing seems out of the ordinary. It is only after the doctor asks where Nagawa’s father’s wife is and another woman frantically rushes in while Nagawa’s mother uncomfortably stands to the side that everything suddenly becomes clear. The film makes an interesting (and unintentional) companion-piece with Peier Tracy Shen’s Like Flying, which was also added to the channel this month and similarly deals with a child learning about her father’s secret infidelity, but from the side of the “official” family. The encounter leaves Nagawa, who at the beginning of the short was confident of her place in the world, now questioning where she fits in. 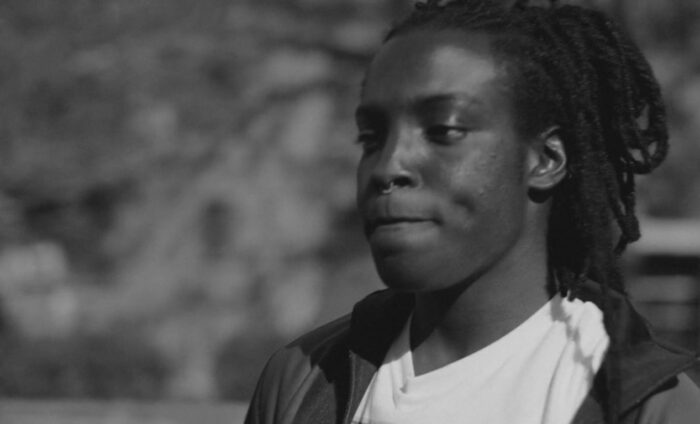 I am going to try to avoid a lot of commentary on this film out of respect for the very personal portrayal of an experience that can never be my own. Strikingly shot in black and white, the short uses both stylized images and more traditional narrative to tell the story of a young black man who has trouble fitting in. He likes anime and doesn’t like rap music, putting him in conflict with other people in his community. It is a powerful and thought-provoking short film that deserves to be watched. 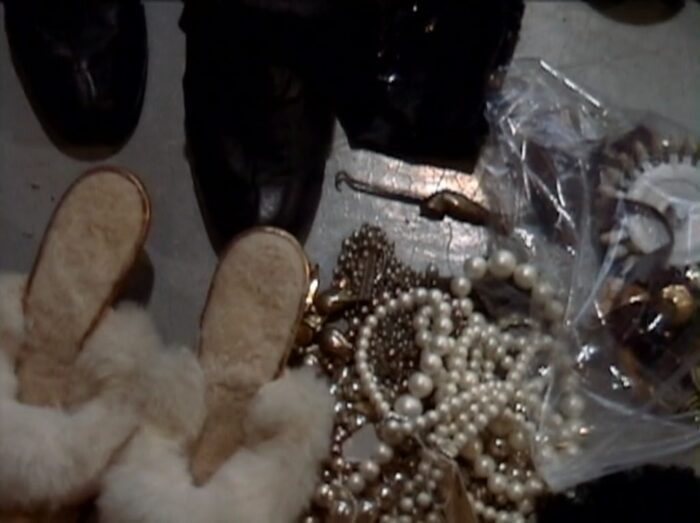 The Fancy is an experimental documentary about pioneering feminist photographer Francesca Woodman, who tragically died by suicide at just 22 years old. The form of much of the film seems to recall Hollis Frampton’s experimental short film (nostalgia), which is also on Criterion Channel. Both films are nearly identical in length and feature off-camera voices describing photographs that aren’t presented to the audience. In (nostalgia), the photographs being described are eventually shown, just shifted from the ones being described—the descriptions are in the same order as the photographs but just come one photo early; The Fancy, on the other hand, never shows the pictures, instead showing where they were shot, recreations, and journal entries.

It’s obviously a non-conventional tribute, but it was still a very interesting and enlightening one. I wasn’t aware of Woodman or her work before watching this short film, but I fully intend to learn more about her.

This is just a taste of the short films on Criterion Channel! What were some of your favorites? Was there a filmmaker whose filmography you’re excited to dive deeper into? Let me know in the comments what stuck out to you, or reach out to me on Twitter, and I’ll be back next month to look at some more Criterion Channel short film recommendations!