“…for the growing good of the world is partly dependent on unhistoric acts; and that things are not so ill with you and me as they might have been, is half owing to the number who lived faithfully a hidden life, and rest in unvisited tombs.” — George Eliot, Middlemarch

Terrence Malick is one of cinema’s most mythical and aloof directors. After his thrilling debut Badlands in 1973, Malick waited five years to release his sunlit classic Days of Heaven (1978) before taking the next two decades off completely. With 1998’s The Thin Red Line, Malick returned to “normalcy”, releasing films at a somewhat regular clip. Though his next two features post-1998 were directed seven and then six years apart, Malick unexpectedly released four films between 2011 and 2019.

Outside of his unpredictable release schedule, Malick also does not adhere to the concept of acting star power. Drawing big names to star in his productions is never a problem, as many want to work with him, but remaining in the picture itself is not a guarantee. Much was made about then-rising star George Clooney appearing in The Thin Red Line in 1998 only to appear in the final cut for exactly one minute. Actors ranging in stature from Mickey Rourke, Rachel Weisz, Michael Sheen, Jessica Chastain, and Sean Penn have had roles in Malick films either completely erased or significantly reduced.

And this approach of cutting actors, regardless of stature, has to do with Malick’s approach to linear storytelling. Nothing matters in a Malick film more than the story so if Brad Pitt’s monologue gets cut down to a silent montage intercut with the sun shining through a tree-line, so be it. Arguably, no one is more experimental with the concept of emotional storytelling than Malick, who tries to tackle the evolution of the human emotional state on both micro and macro levels while at the same time constantly questioning the existence of a higher power and how, in the end, nature, disturbed by technology or not, will live on regardless of faith and ideology.

The Tree of Life (2012) was Malick expressing these ideals on a massive scale. Interspersing a small family’s ups-and-downs with the literal creation of the universe, the Best Picture nominee attempted to show how small scale human emotion is compared to the on-going complexity of the formation of the universe. It showed a small, faith-driven family dealing with concepts of regret and faith amongst the literal formation of the planet. It was ambitious and daring but also slightly cynical. It showed that the world will live on beyond such trivial matters of human frailty.

Yet human frailty is the focus of Malick’s recent release, A Hidden Life. And while Malick’s primal view of nature persevering through human interference is present (the spoken line, “the sun shines on the good and the evil alike” weighs heavy on the film’s main character who, it should be noted, is a farmer constantly using a scythe to cut into the Earth), it indeed is humanity’s microscopic effect on the formation of the universe itself that drives A Hidden Life’s power.

Set in Austria at the end of the ’30s, farmer Franz (August Diehl) and his wife Fani (Valerie Pachner) live a busy agricultural life away from much of civilization. Their small town is surrounded on all sides by misty mountains and endless farmland, the small population informed of world events over a pint or a radio broadcast.

But change is in the air. The town’s mayor is questioning the validity of those not of the white race and the Nazis are recruiting from every end of Europe they occupy. Franz is eventually asked to serve and swear an oath to Der Fuhrer but he refuses. At first, his lack of allegiance simply causes friction in the town. Eventually, however, it leads to his slow dehumanization, both mental and physical from not only the military and his neighbors but from within his own family as well. With resources tight and his young daughters in need of a father while a war rages on, can Franz maintain his ethics while everything he loves is put at risk?

Using the Eliot quote above as inspiration, Malick posits that the greatest test of humanity is maintaining morals even when no one is looking. One thing the Nazis constantly say to Franz throughout the film is that his act of defiance will have virtually no effect on the war or the world. In fact, it will only hurt those he loves. Franz is approached by everyone, from his mother, sister-in-law, the church, the townspeople, lawyers, and the military, to just speak the words declaring his oath to Hitler as, in the end, it is just words: He can say them without meaning them.

But it is Franz’s dedication to his personal ethics that takes him into a hell he can’t escape from. Malick, like in most of his films, offers no absolution or catharsis either. Many of his tales revolve around the horror of existence; that despite the beauty of the physical world, the human ethical sphere is constantly breaking and many die or do not deserve it.

It is this very Malick approach that gives A Hidden Life its true power; we see Franz surrounded by an almost otherworldly beauty that is trapped within a very human evil and a close-minded religious worldview. Malick’s chosen cinematographer, Jörg Widmer, who was a camera operator on The Tree of Life and is working with Malick again on his next feature, The Last Planet, depicts the frankly unbelievable natural wonder of Austria in endless widescreen longshots. 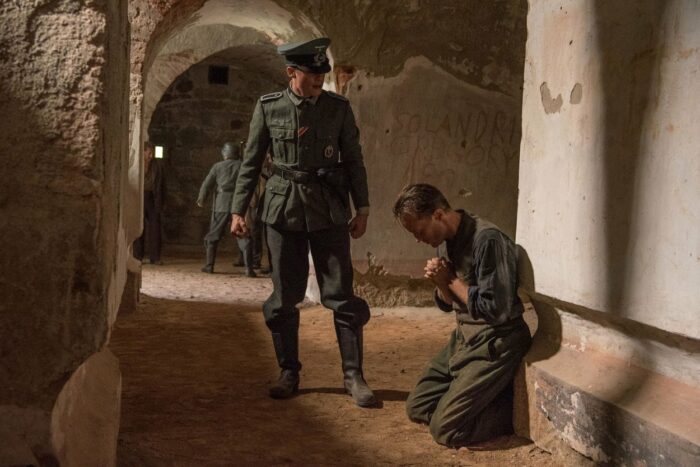 Yet despite how open Franz’s surroundings look and feel, Malick manages to make it all seem so claustrophobic. As Franz’s inner life collapses, the endless open space feels like a prison; too grand and unimpeachable to conquer. It adds an unexpected tension to the proceedings that only Malick can deliver; You’re in awe, but also in fear, of the power of the surrounding universe.

As usual, Malick’s new film is a slow burn. Nothing is ever fast-paced in his films and the three hour run time may test the patience of many. But A Hidden Life is a fascinating look at how personal conviction may not mean much in the grand scheme of things but can define the strength of humanity, even if no one is around to see it or, even, remember it. For, in the end, our world is what we make of it. The indifferent sun may shine on the good and the bad alike but as you feel its heat, what side do you choose?