Though I don’t have the statistics to back this up, it certainly feels like it has been a long time since we got a straight-up adaptation of a classic story on film. And while there are certainly benefits to modernized (or slightly adjusted) looks at classic literature on the big screen, sometimes the rigid duty of adapting the source material to match the author’s intent, as well as the story’s environment, is its own reward.

Emma. doesn’t break any new ground in its newest adaptation from a narrative perspective but that may be to the benefit of the audience. It is a sort of retro callback to adapt a classic story as it was meant to be told. Thus, Emma. is as far from Clueless as Clueless was to Emma the book. And we should appreciate that approach. The book is beloved for a reason: Austen’s yeoman’s work of depicting the social atmosphere or her time, down to the dresses and customs, is expertly replicated in the most recent film version.

Though not as legendary as Austen’s most famous work, Pride and Prejudice, which had an earthy but faithful adaptation of its own with Keira Knightley in 2005, Emma still provides Austen aficionados and the average lover of costume dramas a sense of joy. And Emma. succeeds in capturing the lower stakes and whimsical nature of Austen’s text with a bright, bubbly, nearly ethereal view of Emma Woodhouse’s environs from its picturesque lakes, palatial domestic settings, and tree-filled landscapes.

Emma Woodhouse (Ana Taylor-Joy) is a well-to-do socialite who likes to spend her endless off-hours matchmaking, not realizing her actions are mostly unsuccessful and chaos inducing for her hometown (or at least as chaos inducing as an idyllic town like Highbury can get). Emma’s newest friend/project is the dopey and naive Harriet (Mia Goth) who has eyes for Mr. Elton (Josh O’Connor) who in turn has eyes for Emma. But he’s not the only one…or two…or three. The unmatched Emma becomes the victim of her own game when mysterious man Frank Churchill (Callum Turner) and nemesis George Knightley (Johnny Flynn) vie for her attention as well. The result is a comedy of errors in which love is professed, rejected, reformed, and renewed.

Ana Taylor-Joy makes for a compelling lead as Emma Woodhouse. She captures both sides of Emma beautifully: the snobbish socialite with mild contempt for those beneath her but also the intellectual sensitivity of a woman who realizes she isn’t perhaps as learned or experienced in the ways of life as she gets on. And while she certainly carries the screen, it is her chemistry with foil Knightley, played dashingly by Johnny Flynn, where the sparks fly. In a story that purposefully lacks grandiose fireworks, the injection of true sexual tension is welcome.

And that leads to Emma.’s sly take on sexuality. For all the discussion I’ve had on how traditional this adaptation is, there still are little peaks into subversion that keep the eyebrow raised. It never goes overboard and when it chooses to stray from Austen’s intentions, it does it ever-so-briefly. One scene, in particular, involving Mr. Flynn’s derrière, had me wondering if Emma. was going to become The Favourite all of a sudden but, after three seconds, that feeling (and Mr. Flynn’s backside) went away and never returned. 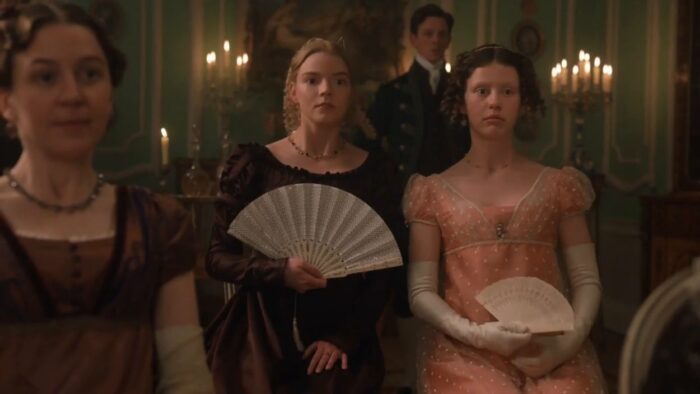 In a return to butt-related subtext, another scene has Emma appear uncomfortable at her daily garb while alone in her room. She lifts her dress up to show a butt cheek to, presumably, allow some air in. It is only a two-second moment but one that not only breathes humanity into these costumed characters, who in many adaptations often become stuck, but allows a split second (or two) of the subterfuge to be lifted. This is all just a game…an inconvenient one at times…and even the crafty Emma needs some relief.

Just describing those scenes makes Emma. seem more risque than intended but both scenes are presented non-sexually and, by my calculations, for a total running time of five seconds. It is simply flirtation with a more daring approach surrounded by the normal, and faithful, pomp and circumstance of the time. Adding in the crackling energy of Taylor-Joy and Flynn and Emma.’s faithfulness is infused with subtle sexuality that doesn’t distract.

For a film primarily about women, it is refreshing for a professional production to allow women to tell the tale. Directed by photographer Autumn de Wilde, in her directorial debut, and adapted by novelist Eleanor Catton, Emma. has a strong feminine soul, told with a surprising amount of confidence for a team of newcomers. Unlike the title character, the director and writer don’t find themselves over their heads with the task in front of them. Because of that, Emma. is thus a strong recommendation