Actors are often asked by the many curious people fascinated by their work where they find the inspirations for the characters they play. Dropped by talk show hosts and adoring fans alike, it’s a common question, but a welcome open-ended one. The answers are almost always a fascinating blend of intentional craftsmanship and revealed individual quirks. If you know the personal history of Liam Neeson away from his tough and towering screen personas, you will know he, and his son Micheal Richardson, did not have to dig far for their characters in Made in Italy from IFC Films.

There isn’t a term for every family dynamic. “Widower” is a ready-to-assign term for a man losing his spouse. Neeson himself is one. “Orphan” is the title of a child who has lost both their parents. There isn’t, however, a label in between for a child who has only lost one of them. Count Richardson among that lot. They are sorted into the same malaise as other single-parent-led children that come from divorce or other undesirable circumstances. People will resign themselves to some shallow “at least you still have your dad” sympathy when the pain and trauma couldn’t be graver for their situations.

Take that further. What if the one parent remaining pushes away or denies the steps of healing necessary for the child? With other and lesser external influences instilling limited resilience instead of the most important source in the home, how would that kid turn out?

That’s Jack Foster (Richardson), a struggling art gallery manager at odds with his absentee father Robert (Neeson). They lost their matriarch Rapheala many years ago in an automobile accident. At the time, Robert was a well-regarded painter who passed Jack on to boarding school, beginning the split to their present contentious alienation. The rough-hewn artist is romantic where it counts and cynical where it doesn’t. Disdain fills Jack’s thinly-veiled pleasantries around him now. 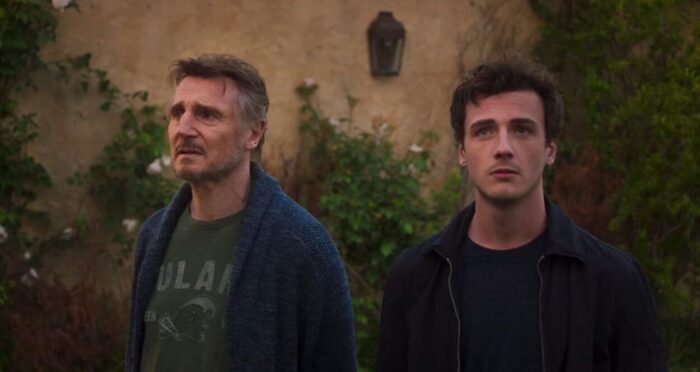 Jack is about to lose half of his gallery ownership stake in a messy divorce from his wife Ruth (Yolanda Kettle). He has a month to sort out money issues. Impatience and desperation fuel Jack’s regrettable request for help from his prickish father. His plan is to fix up and sell his mother’s former Tuscan estate to gain the necessary funds. Robert is the other half-owner this time that needs to sign off on such an asset.

At the behest of a local realtor (a curt Lindsay Duncan of About Time), a great deal of work is needed to get the place into selling shape, spit and polish the two DIY-challenged Foster men think they can do themselves on top of the home’s “great bones.” Their forced and haphazard teamwork creates butted heads, vented aggression, and the most shared time they’ve had in years. This is quality time through attrition and contrition. More than doors are going to be unlocked and more than floorboards are going to be hammered out between the two amid the idyllic Italian cypresses.

There is no timeline for grief. “You can’t remember and I can’t forget.” That line shows the divide between Robert and Jack’s different approaches to the memory of Raphaela. The son who was removed from gaining catharsis at a young age fights to remember so much that was repressed or unaddressed. Meanwhile, the father and husband desperately seeks to remove his inescapable regret and guilt. Time has not helped either man in their differing directions. Yet it’s never too late to heal and the effect multiples when they align. 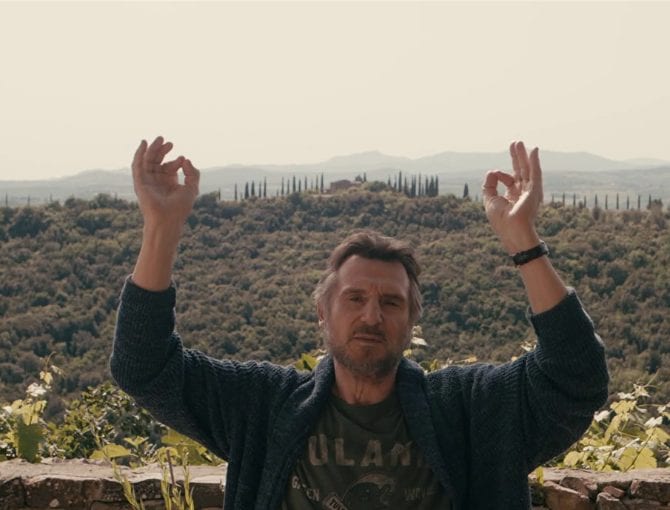 If you’re going to have sunlight cauterize wounds of the heartstrings and tan the skins of sadness, it might as well be in one of the most beautiful places on the planet. Cinematographer Mike Eley (My Cousin Rachel) had the enviable job of shooting the picturesque Montalcino in all its majesty. Parallel to the angles, production designer Stevie Herbert made just enough of the beautiful ugly for mock architectural rejuvenation alongside the human project. One could call this setting a little too easy, but the scars here are not entirely superficial.

This positive and emotional journey that seemed tailor-made for this father-and-son combination was written and directed by actor James D’Arcy, known to many for Dunkirk and Cloud Atlas. Made in Italy is his feature debut in the big chair and the culmination of a passion project twelve years in the making that he intended to star in himself. As fine an actor as D’Arcy is, the pairing of the two leads feels like special cinematic providence and witnessed therapy beyond the script or cameras. 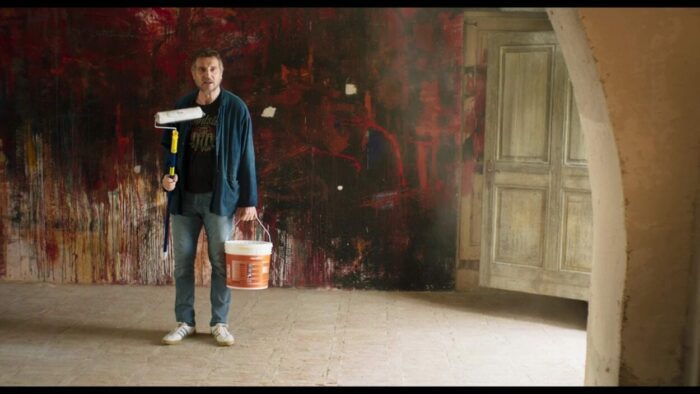 Eight and a half years ago while reviewing The Grey, this writer wondered about Liam Neeson’s acting approach in a very similar fashion to the opening paragraph of this new film’s critique. There was a fear in regards to where the Irish star called upon the inner darkness, loss, and will it took to play the bitty and angry parts he had been playing. Time has softened that edge and added silvering wisdom.

Eager audiences may relish his current typecasting of violent gruff, but they need to marvel at Liam Neeson’s capacity for softness. With Made in Italy and its occasional dalliances into comedy, the shell that comprises Neeson’s defenses sheds layers of honesty and translucent prisms to his heart. Fear is no longer in the equation and that’s a remarkable and gratifying sight to behold.

That appeal is entirely aimed at lifting up his son. He may not have anywhere near the marquee cache of his father (yet, with crossed fingers of optimism), but Micheal Richardson is the leading soul of this movie. Jack’s arc may indeed be the simpler, more outward, and more predictable one of the two men, complete with forced contrivances here and there (like a romance with a local chef portrayed by TV actress Valeria Bilello) to ensure positively-tied ribbons and bows. Still, calls of nepotism be damned, the young actor comports himself admirably generating his own empathy.