From time to time, there is a recognizable level of laziness in big budget films. Some amplify their dollars properly and it shows on the screen, clear as day. Others take all the frills they have and go through the motions with low risks and even less inspiration. By contrast, grassroots indie films are cut from a different cloth often made of burlap instead of cashmere. When every penny counts because every penny was a struggle to scratch together, there is a greater commitment level of all involved. And, just like the lavish blockbusters, it really shows on their finished project too. The instant cult classic Lake Michigan Monster screams commitment in every facet of its being.

The first aspect you will immediately notice is a charge of style. From the get-go, Lake Michigan Monster introduces an incredibly creative visual presentation that never lets up. Intentional filters of fleck-filled black-and-white from the camera team led by Sebastian Johnson present establishing fonts and screen transitions for the high adventure to come. A roaring pep of kitschy archival music from the DeWolfe Music Library embellish the serial feel this quick 78-minute film is going for. Where larger films dump resources into blurry dazzle, this one does it better with less. The trailer alone needs to be seen to be believed.

The taller the better when it comes to tall tales. If the Lake Michigan Monster visuals don’t immediately grab you as something completely fresh and wholly different from the lazy norm, the bonkers commitment to its storytelling will paddle you next. Writer/director/producer Ryland Brickson Cole Tews is Captain Seafield. He is a bearded, quick-tongued, and grog-downing mariner who claims his beloved father was killed by a sea monster, a mere fathom (that’s six feet for the cinematic landlubbers) off the titular Great Lake shore near Milwaukee. The story is suspect, but the captain clamors his feverish plight to anyone who will listen and quickly finds willing (or gullible) help.

Seafield has dutifully enlisted his “team of the century” to help him track and destroy the unseen leviathan. His odd squad includes pragmatic radar specialist Nedge Pepsi (Beulah Peters), gung-ho weapons expert Sean Shaughnessy (Erick West), and the strapping former naval officer Dick Flynn (Daniel Long). Powered by whiskey and enthusiasm, they hatch their hair-brained schemes from their appropriate lighthouse clubhouse (filmed at the North Point Lighthouse in Milwaukee) while they shoot the shit and tell their sordid stories.

“Energy is a good thing,” said with a tongue in cheek. Seafield guides his hired minions through one failed and pun-titled operation after another to nab his beast. The team on-screen and the crack filmmakers captured the fun both surge with reckless abandon and it’s a blast of zest. Each stranger and stranger failure and break in the quest reveals the unreliability and questionable intelligence of their frazzled nautical leader. Likewise, the threat they pursue is more than it seems. 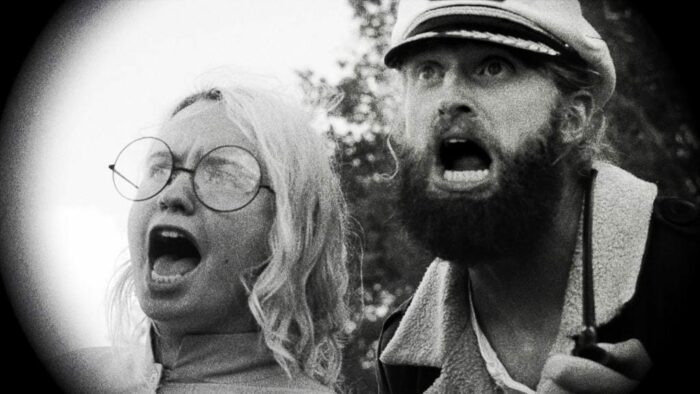 Coincidental to settings, as fate would have it, Lake Michigan Monster predates Robert Eggers’ The Lighthouse, with all of its (overrated and) lauded praise by a year. What Tews and company have here is something utterly more enjoyable with plenty of festival laurels of its own merit, including the Audience Award for Best International Feature at the celebrated Fantasia International Film Festival and four FilmQuest Awards. Sure, none of that is a prize from Cannes like Eggers’ fever dream, but panache can outshine prestige in a case like this. Lake Michigan Monster may even have more balls than that darling A24 chamber piece.

Ryland Tews and company knew the askew target of their pulp and took every MacGyver hack and slash they could at it for pure fun. Suaveness turns surly. Spooky climbs to surreal. By the wild end, sure enough, senile turns to sillly. The farce lives up to the midnight movie homages of its promise, and the results are a blast! Somewhere, Chicago’s own Svengoolie is smiling.

Every braided shoestring of DIY indie filmmaking on Lake Michigan Monsters swings a proverbial kitchen sink of derring-do flair on the end of it. Editor and animator Mike Cheslik of Netflix’s The Get Down (the MVP of this film) splashes buoyant pacing and endless layers of light visual effects that have creativity and energy to spare. Each sink of eye-popping detail is wielded like a medieval flail used to dispatch dragons of snobbery and doubt. Never ever look down on this class of movie because this is where you find true commitment.