Paterson screened in cinemas in late 2016. I remember this distinctly because I saw the posters plastered all over the London underground. They seemed unusual to me, Adam Driver and Golshifteh Farahani curled into each other on a rumpled bed, and it seemed wonderfully simple and quiet.

I didn’t catch it in the cinemas, but when I eventually rented Jim Jarmusch’s film, I was rather awestruck. Paterson isn’t a particularly exciting film but, quite frankly, if you’re looking for thrill rides from Jarmusch, you’re looking entirely in the wrong place. Instead, it’s a quiet, tender film, one that speaks to a lovely idealism about the place of art in people’s lives; finding joy and inspiration in routine and listening to other people. Paterson is about one man’s week (Paterson, as played by Adam Driver) as a bus driver in Paterson, New Jersey (yes, much is made of that). He wakes up with his girlfriend, has breakfast, drives his bus, comes home, walks the dog and has a drink in the local bar, where he chats with his friendly neighbourhood barman, Doc. That’s it, that’s what he does for the entire week.

But Paterson is also a poet, and a damn good one at that. He writes his poems down carefully in a notebook on his breaks, when getting ready for work, whenever he has time and reads them to his girlfriend upon request. American poet Ron Padgett actually supplied the poems used in the film, writing three new poems specifically for the production. As Paterson is writing the poems, they appear as narration, written in his handwriting on the screen. It allows you inside his head, as he hesitates over word choice and stops and starts, depending on the rhythms of his day. This was my main source of suspense for the film. That lovely poem about the Ohio Blue Tip matches—how will it conclude? What will be his final statement? As it turns out, it becomes a love poem to his girlfriend, its twist contingent on the context of the rest of the poem that came before it.

That is what viewing this film is like, as you watch Paterson go about his week and dealing with ordinary occurrences, some of them funny (his coworker, Donny, with his endless stream of health complaints made me laugh a lot), some melodramatic (a pre-The Good Place William Jackson Harper plays local actor and lovelorn fool, Everett), but mostly they’re just sparse. They are encounters with artists in their everyday lives. As he’s walking his dog one evening, Paterson encounters a rapper practising his flow as he’s doing his laundry, so he stops to listen. When caught, he’s not embarrassed, but sincerely appreciative that he got to see someone practising their art in that moment. This scene is echoed throughout his week – like when he encounters a young girl, a poet like himself, and she reads him a rather lovely poem she’s been working on, and his friend Doc who endlessly practices chess against himself, training for a big, upcoming tournament that we never get to see.

This is art as it is practiced—slow-moving, filled with pauses as it fits into other tasks. “It’s about art as integrated into life”, is what I wrote in my notes on the film. I stand by that. Paterson may be a poet, but Jarmusch could have easily made this point through any number of artistic mediums, as exemplified through Laura, Paterson’s flighty yet supportive and multi-talented girlfriend. Poetry is simply the vehicle through which Jarmusch makes the point that art doesn’t have to encompass your entire life to be an integral part of it. So often artists are portrayed as tortured and dramatic, but that’s not necessary for creating good art. Jarmusch contends through this film that art can come from a place of contentment and a spirit of generosity, rather than conflict and danger, and this applies to both Paterson’s poems, and the film itself.

Jarmusch’s direction and script are both deceptively simple, leaving long stretches of silence as the audience and Paterson quietly observe his world and the people in it, making the moments where something “happens” all the more marked for the contrast. Driver’s performance goes along with that perfectly, portraying the character as remarkably still and quiet, but clearly engaged with the world around him as he listens to others. I firmly believe that Adam Driver can join Amy Adams in the club of “Actors clearly snubbed for Oscar nominations in 2017” because of this film. He eavesdrops on his passengers, not voyeuristically, or even to use in his poetry, but simply because people interest him, and he likes hearing conversations without taking part in them. However, he definitely doesn’t like Laura’s dog, whispering at him “I don’t like you, Marvin” after a particularly egregious example of pet-caused chaos. It’s been over two years since I saw this film and I still laugh at that delivery every time I think about it. 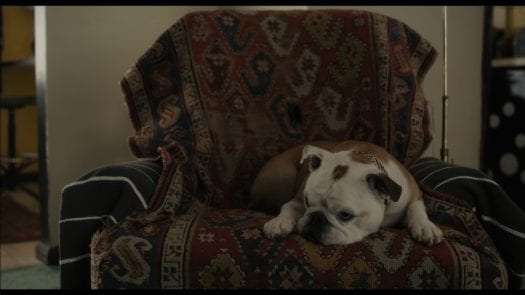 Art can seem intimidating, like it’s blocked off from the rest of humanity by a glass case, protected by impenetrable vocabulary and decades of discourse into what counts as a ‘canonical’ work. But I think this class-based, elitist lie is what Jarmusch lays bare in his film. The poems produced by Paterson aren’t long, or structured in the sorts of forms you only learn about in English class. They’re accessible and all the more moving for it. “It doesn’t really rhyme, though”, the little girl says to Paterson, embarrassed, before reading him her poem. “That’s okay, I kind of like them better when they don’t”, he tells her. The art in Paterson isn’t made for money or glory, but for the pure pleasure of creation. It can be private or performative, but mostly, art is universal, something everyone partakes in and enjoys and shares.

In that spirit, I think I want to leave you with Ron Padgett’s ‘Poem’, as something to be reflected upon, but mainly enjoyed:

Hannah Searson is a UK-based staff writer for 25 Years Later and occasional freelancer. Her main interests lie in ghosts, action films, sad people crying about their feelings, and reality television.