In Rupert Goold’s 2015 film True Story, there’s a scene that seeks to find an answer to this question: “Can we separate the art from the artist?” This is one of the essential questions in current popular culture and one that has always been present.

Felicity Jones, whose performance in this scene alone deserves applause, plays Jill Barker. She’s the wife of Jonah Hill’s Michael Finkel, a journalist who develops a relationship with James Franco’s Christian Longo, a man on trial for the murder of his wife and three children. As the film progresses, as does Finkel and Longo’s friendship. Finkel eventually begins to doubt Longo’s guilt, even seeing himself in this accused murderer. He starts to believe Longo’s explanations over what happened and becomes so absorbed in who Longo presents himself as that he doesn’t pay close attention to the evidence against Longo. 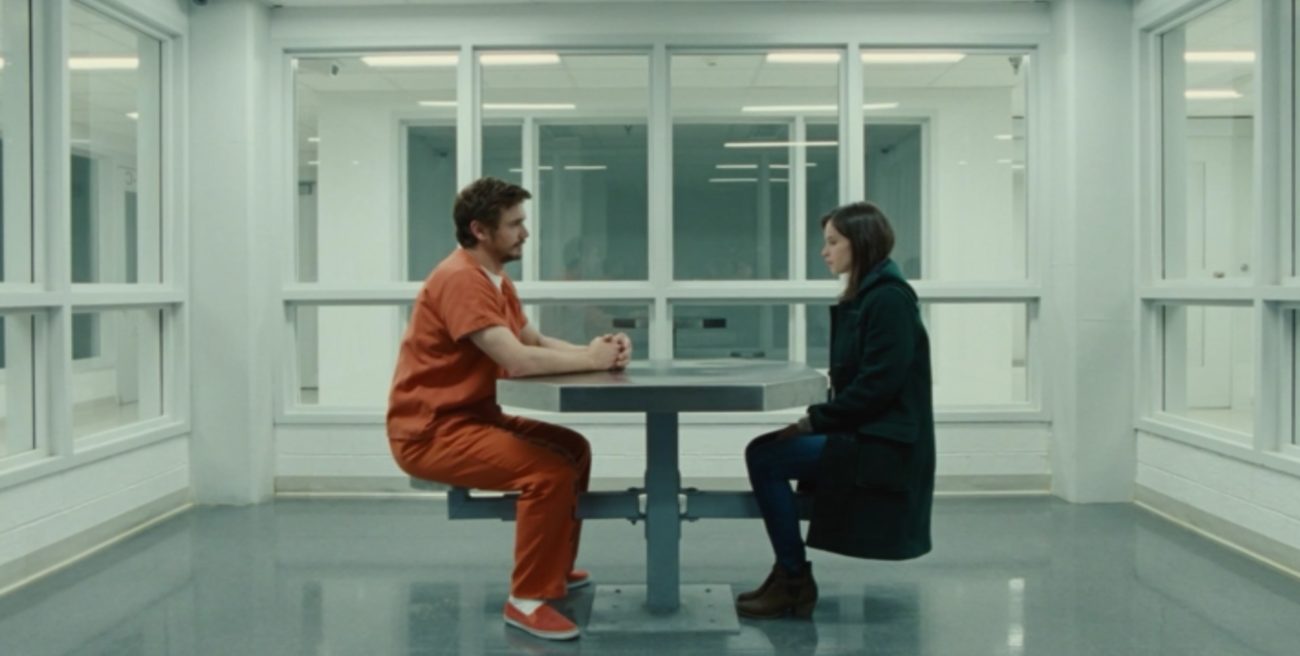 In one of the quietest yet most captivating scenes I’ve ever watched, Jill visits Longo after he’s testified. There’s not much sound, let alone a score, and most of the scene is made up of close-ups. In a remarkable bit of writing and acting, the scene begins with Jill seemingly weaker than Longo. He’s calm and steady, while she seems close to shaking. He can tell she’s not comfortable, and almost immediately, he tries to charm her:

I haven’t seen a woman in so long. Looking at you is…like seeing the ocean.

He says this with some vulnerability as if he can show her that he’s just some guy who gets a little shy around a beautiful woman. However, Jill lets him know that line hasn’t worked on her:

It appears that Jill is certainly not the weaker of the two. Also, the line itself does well as a reaction to Longo’s false admiration of Jill, as she simultaneously rejects it and minimizes herself to show that she’s a human being, small yet strong. In response, Longo’s posture seems to harden. He’s not in control anymore, that’s for sure.

And with that, Jill proceeds to explain why she’s there. She begins with a question:

Can I play you something?

Without waiting for a response, or perhaps Longo realizes she’s not so easily charmed and therefore doesn’t answer, she takes out her phone and plays a piece from an opera. She places the phone down and the two listen for a few moments before she begins the first half of a speech that is the centerpiece of this scene:

“Se La Mia Morte Brami.” “If You Crave My Death.” Carlo Gesualdo wrote it in 1611. A few years after killing his wife and newborn son. His wife had a lover, so he tracked them down with a hunting knife. He stabbed her many, many times all over her body, and as she was bleeding to death on the floor, he forced the lover to strip her naked, put on her bloody nightdress and humiliate himself, before shooting him in the head. Then he went upstairs and beat his infant son to death against the side of his crib. The music is almost beautiful enough to make me forget I am listening to something written by a man who broke his baby’s skull on a piece of furniture… but not quite.

Whether or not director Rupert Goold or co-writer David Kajganich intended this, it’s not difficult for me to see this speech as an answer to the question at the start of this article: can we separate the art from the artist? 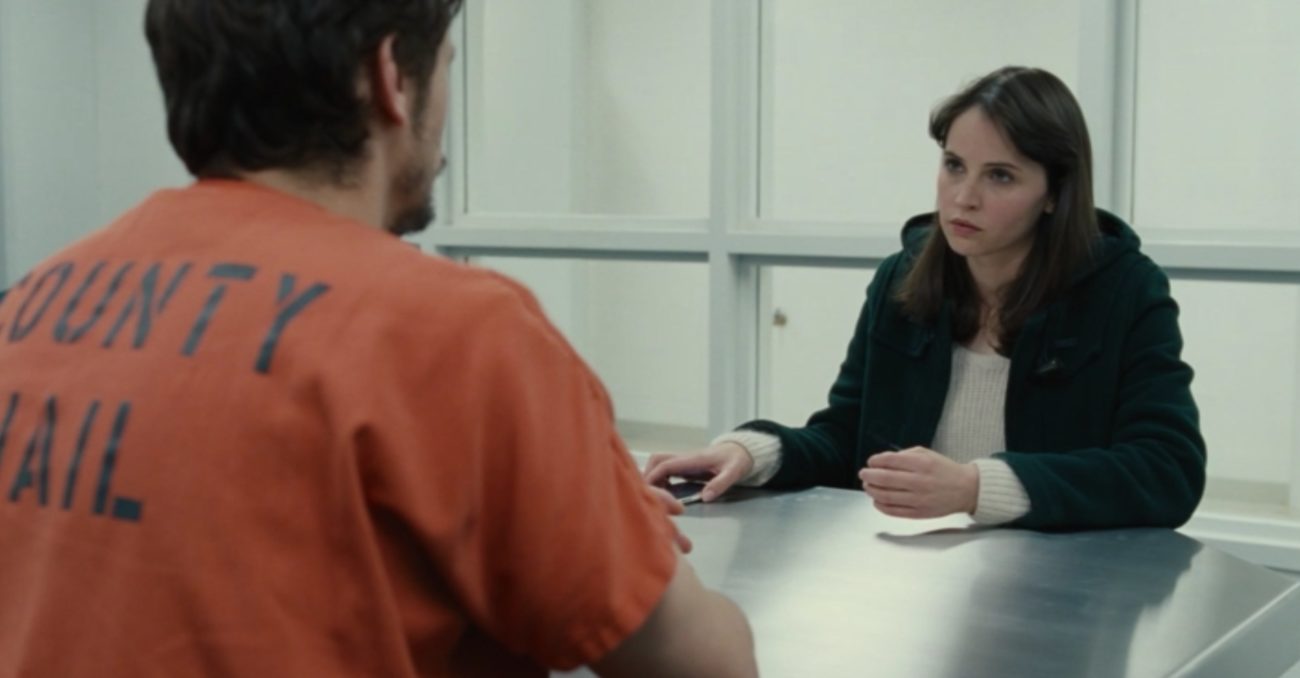 Aside from calling it “beautiful,” Jill doesn’t spend all that much time on the music itself. Rather, she allows for Longo (and by extension, the audience) to hear it in the background as she explains what the composer of this piece did to his family. The work of art speaks for itself. For some, it is beautiful. For others, not so much. For the rest, somewhere in between.

The point Jill is making is that art is art. We can be critical as much and as often as we care regarding art. However, what we can’t forget is that human beings are responsible for such things. At times, it’s easy to focus so much on the creation that we fail to pay attention to who did the creating.

And it is important. As Jill says, “The music is almost beautiful enough to make me forget…but not quite.”

What is being suggested is not that the piece of music is any lesser than it was before knowing the actions of the individual who wrote it. When artists do or say things that are reprehensible, that does not devalue the work they created. It can, however, add a new dimension to it.

When someone like J. K. Rowling goes on Twitter to espouse her opinions concerning trans rights, that can change how one reads her work. Perhaps now, some readers can see this kind of thinking reflected in the world of, say, Harry Potter. This can have quite the effect, so much so that the books don’t read as fun, magical, or progressive as perhaps some once believed them to be.

All this said, Carlo Gesualdo’s piece of music and Rowling’s work are examples of the kind of art that one can absorb without having to literally see or hear the artist at work. Of course, it’s more than possible to listen to Gesualdo’s music or read Rowling’s books and believe we are hearing these people. In a way, we are. This is why it can be difficult to separate the art from the artist.

As for me, I do not hear Rowling’s voice or see her face whenever I read a Harry Potter novel or watch one of the movies. This can, in turn, make it easier for me to separate. Well, almost.

Having the knowledge that Rowling believes the things she tweets about does affect the way I take in her work now. Is that fair to the artist? Honestly, I couldn’t care less. She’ll be fine regardless of my opinion. Now, is that fair to the art? Well, in the case of the books, I own them, and they still mean something to me. She cannot take that away.

In the case of the movies, it can be a bit more difficult with the new ones. If I go and see the new Fantastic Beasts, am I supporting Rowling’s ideas? What of the cast? Should they know better? What about the hard-working crew? Should they turn down work and hope to find something else so that can feel good about not working on a project written by someone with bigoted notions? I honestly don’t know.

Of course, in the case of J. K. Rowling, we’re dealing with ideas. What about when an artist has done awful things and appears in their own work? Is it more difficult to separate the art from the artist when we’re dealing with someone like Bill Cosby? I can truthfully say that I loved The Cosby Show, but there’s no way I could watch it now, knowing what I know. The same can be said about a lot of other performing artists, like the man who plays Christian Longo, James Franco.

It can be difficult to separate the art from the artist when the artist is present in their work, but what of the artists whose faces we do not see?

Being critical of art starts with asking questions. It’s what we all do to some extent, consciously or unconsciously. But what about questions that involve the artist, too, rather than just the art? After all, if an artist is bigoted, does that devalue or eliminate an important work of theirs that perhaps teaches the opposite? If an artist commits a heinous crime, does this affect their work in any way, even if their work has nothing to do with whatever crime is committed? I have a lot of questions, but Jill seems firm in where she stands, and that’s pretty admirable. Not only that, but she confronts Longo face to face. Even though he’s no artist, he’s a man who did heinous things and then wanted to be treated as the person he was before.

That’s not possible. Jill understands that. And, ultimately, I understand that.

Eventually, she stops the music, and adds this just before leaving a speechless Longo:

What Jill says is true, in a literal sense. Even if Longo is found guilty; even if the world forgives him; and even if he moves on from this, what happened, happened, and nothing can change that.

The idea that the actions of an individual have consequences is difficult for a lot of people to understand in this whole debate. I’m not talking about what a court of law says about what someone did or didn’t do. I’m talking about when we know what someone did (or said or wrote). The audience knows whether Longo is innocent or not. We know what Rowling tweeted. And so on.

What comes next, though?

Jill seems to still listen to “If You Crave My Death.” I still watch the Harry Potter movies whenever they’re on TV. But she’s right. I can’t forget what I know.

It’s difficult to watch an interview with Rowling now. I have this piece of knowledge about her, and it affects the way I see and hear her. The films and the books are somewhat removed for me, and yet, I can’t help but think about her ideas every now and then when I’m watching or reading this stuff.

I cannot tell someone to forgive. But I do want to be clear about something: we shouldn’t forget. Jill makes it clear to Longo that she won’t forget, and neither will time. Again, what’s done is done. He killed his family. Period.

This scene runs less than four minutes, and although it certainly has its place in the plot of True Story, what amazes me is what is said in those few minutes, because it transcends the film. Longo doesn’t have to literally represent any specific artist, but he and Carlo Gesualdo are interesting examples of what Jill is getting at.

Longo is the artist we see and hear, and Gesualdo is the artist whose work we see and hear. We have the same dilemma with both artists, of course. Ultimately, can we separate the art from the artist? Yes and no. The art is the art, regardless of who created it, even if that individual is present in their work. Regardless, we shouldn’t have to disregard their actions for the sake of keeping their art clean of their mess. 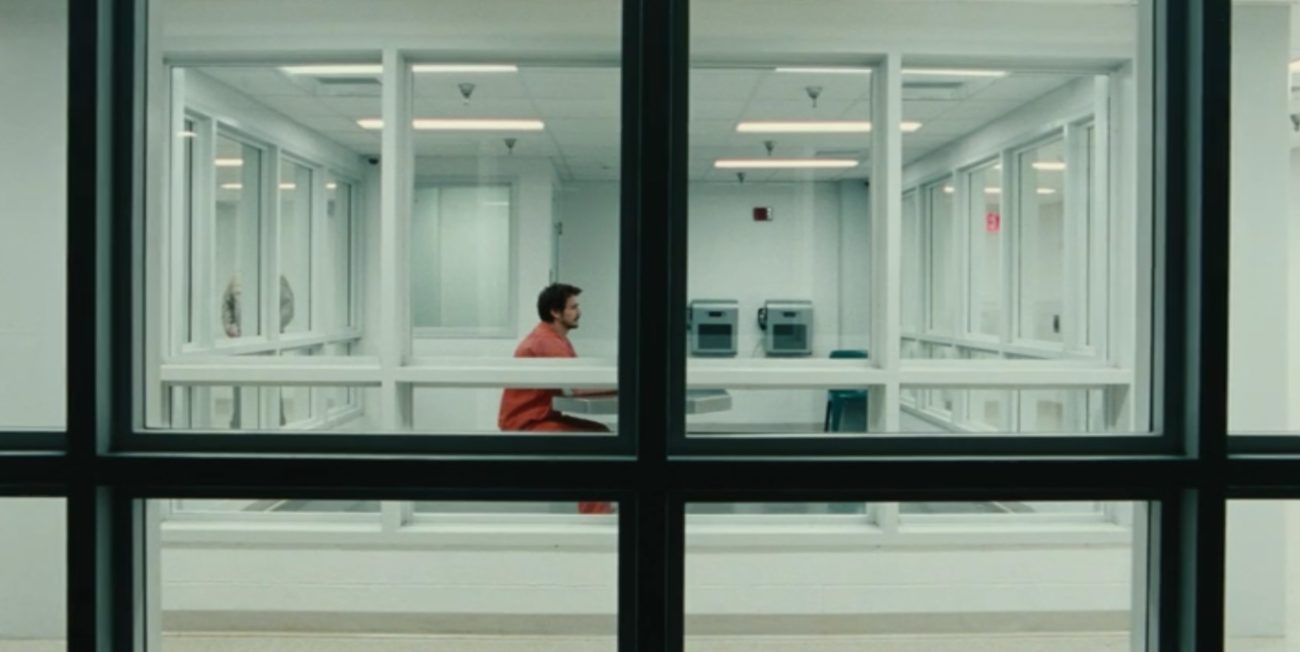 After all, as the scene comes to a close, she’s free to get up and walk out of that prison. Longo is still there, and it’s clear that he will never be able to escape it.