For most non–English countries like Brazil, it’s hard for their domestic films to have any noticeable presence in majority English–speaking countries like the United States. Most of Brazil’s notable films like Black Orpheus (1959) or City of God (2002) give prominence to life in urban centers like Rio De Janeiro. However, directors Kleber Mendoça Filho and Juliano Dornelles aim to focus on the smaller and more intimate life of the Brazilian countryside with their Neo–Western Thriller Bacurau (2019). In this modern incendiary work, the titular and fictional settlement of Bacurau, led by Teresa (Bárbara Colen), the granddaughter of Bacurau’s recently deceased matriarch, and her current love interest Pacote (Thomas Aquino), band the town together against a mainly–American mercenary group led by Michael (Udo Kier) that plans to massacre the town.

By creating a sense of intimacy with the many inhabitants of the town and utilizing the genre trappings of a gritty western, directors Filho and Dornelles emphasize the necessity of common people to band together in order to survive against oppressive forces that threaten their rights and well–being.

From the very first act of the film, the tight–knit nature of Bacurau is established. With the death of the village’s matriarch Carmelita (Lia De Itamaracá), all the inhabitants line up from the outside her home to her bedroom door, quietly conversing with each other and sharing a peaceful moment. This moment of unity is shot with dozens of characters taking up the screen, making the audience part of the community of Bacurau as Teresa unites with them in the ceremony. Even when Carmelita’s friend, Domingas (Sônia Braga), interrupts the serenity of the gathering with loud insults towards the deceased matriarch, the directors don’t treat the character with any disdain for her extreme grief by allowing any of the characters to counteract with additional insults or threats, revealing that even agitated members of a small community like Bacurau deserve understanding and space as much as anyone else there.

The village of Bacurau is presented similarly to the small towns of a typical American western film. Shot in bright outdoor locations with surrounding desert–like environments, and having the town separated miles from any nearby population centers, a modern audience used to sights of larger population presence and more modern architecture are transported to a more humble living within the village. As Tony Jr. (Thardelly Lima), the despised mayor of the region, comes to the town for a re–election campaign and is met with deserted streets due to his arrival being forewarned by scouting members of the village, the disparity between the poorer village and rich government official is unmistakable. The formal clothing of Tony Jr. and his luxury transports, with loud speakers playing campaign music, and digital screens, are juxtaposed with the unpaved dirt roads and simple concrete buildings that make up the town. As Tony Jr. is alone in the street, it’s a powerful visual that shows both symbolic and literal division between a hardworking class of people and supposedly helpful politicians as the people of Bacurau are absent from Tony Jr.’s view, similar to how they typically aren’t in view during his controversial political actions.

As the film progresses, the town becomes more isolated, as they’re erased from digital maps and their water truck arrives with leaking bullet holes. A mainly–American mercenary group led by the German–born Michael descends upon Bacurau to kill all the inhabitants without their presence being known. The sadistic group is a polar opposite of the warm and charming Bacurau community, with the American members of the group insulting their Brazilian aids based on their language and skin tone, before gunning them down based on received orders from their wireless earbuds. The filmmakers highlight the evil and lethal mindset of racism and nationalistic mindsets against ethnically diverse populations, as these toxic worldviews lead to the brutal deaths of innocent Bacurau community members for no apparent reason besides a hunting mindset.

The friendship that is expressed in Bacurau with plentiful conversations and scenes of dance and music is juxtaposed with the often combative members of the mercenary group, arguing about nationalistic ideals and the validity of their attributed points that result from their kills. These signs of strife between the mercenary group foreshadow the eventual defeat they endure when fighting the inhabitants of Bacurau, as they cannot band together in strength to fight their targets due to a lack of connection between them, a vital characteristic that makes a fighting group much more effective in survival. The directors make the mercenary group seem even colder and calculated through the sanitized and futuristic bunker location that they sleep in, a visual antithesis of the more vibrant, earthy colors and simplistic architectural designs that make up Bacurau.

By the ever–growing isolation of the village from the outside world, the directing pair reinforces the ideal of community strength being necessary against hostile attacks. With the deaths of an outside ranching family and a duo that leaves to investigate it, the separation of the individual(s) from a community leading to their demise is thoroughly emphasized. These members, separated in distance from the larger perimeter of the village, were killed in a violent and brutal fashion without an ability to effectively defend themselves.

Pacote, himself an experienced criminal gunman, requests the help of fugitive Lunga (Silvero Pereira) and his gang to help defend the town, a take on the western trope of a besieged town needing the help of an experienced outsider group to survive bloodthirsty opponents. However, as the village bands together in a final stand manner similar to the climax of a western film, the mercenary group beings to head to the town and finish their massacre.

Each gunfight between mercenary and Bacurau inhabitant is shot in a brutal manner, with the results of being shot shown in gory close–up shots and focusing on the gasping, blood–choked breaths of the dying mercenaries. Just as the violent real–world political climate of the late 1960s resulted in the brutal scenes of death in western films like Sam Peckinpah’s The Wild Bunch (1969), the turbulent and violent period of the 2010s results in a western film that retains the same viciousness fifty years later. 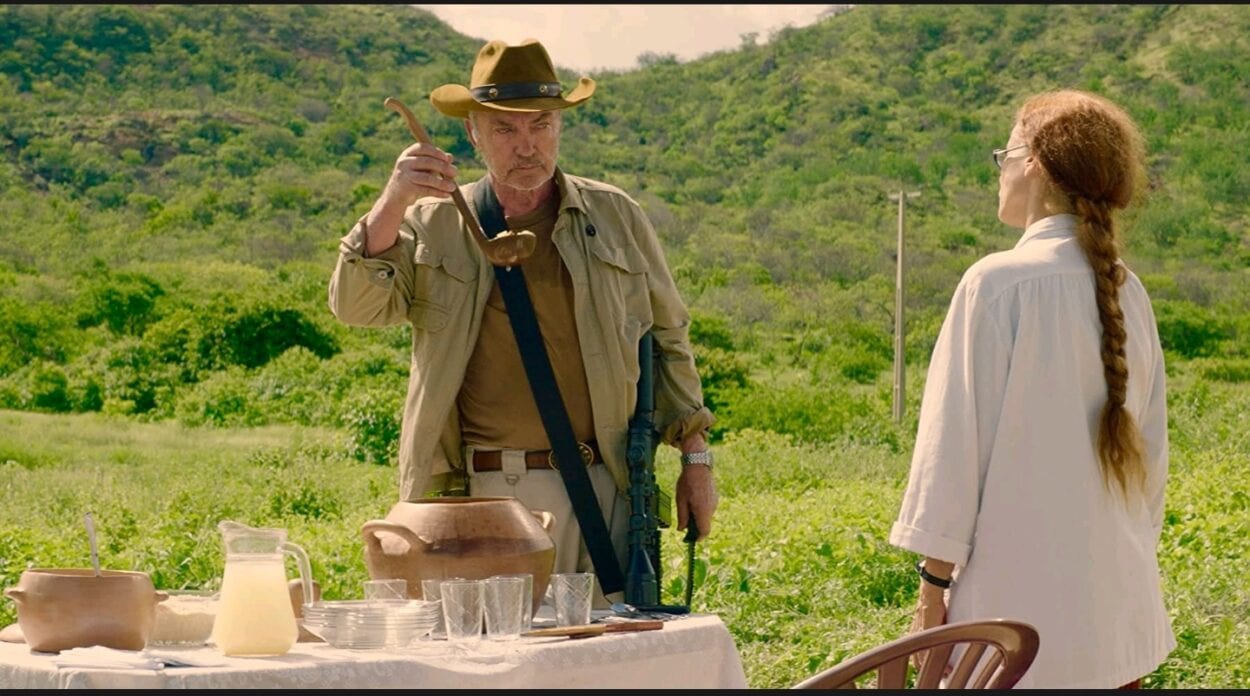 With the town banding together against the hostile mercenary group, they’re able to overcome a more technological and lethally armed force by combing all their less–advanced resources to fully eliminate the threat. As Tony Jr. returns and Michael reveals they’re previously acquainted, Bacurau removes their despot and banishes him to the wilderness, just as Tony Jr. frequently abandoned them and their needs to keep the nearby dam open. This removal of a corrupted government official is a rejuvenating scene for a modern world, in which it seems that no government officials are able to be accounted for their lack of care towards their voters. This removal of Tony Jr. underscores a potential for a general populace that a close knit common population can overpower a more advanced, yet smaller, ruling group. As the severed heads of the mercenaries line the steps of Bacurau and Michael is captured and buried underneath the town in a cell, the people of Bacurau have an ability to now thrive in their community, a hopeful ending that is a necessary view in the turbulent world of today. 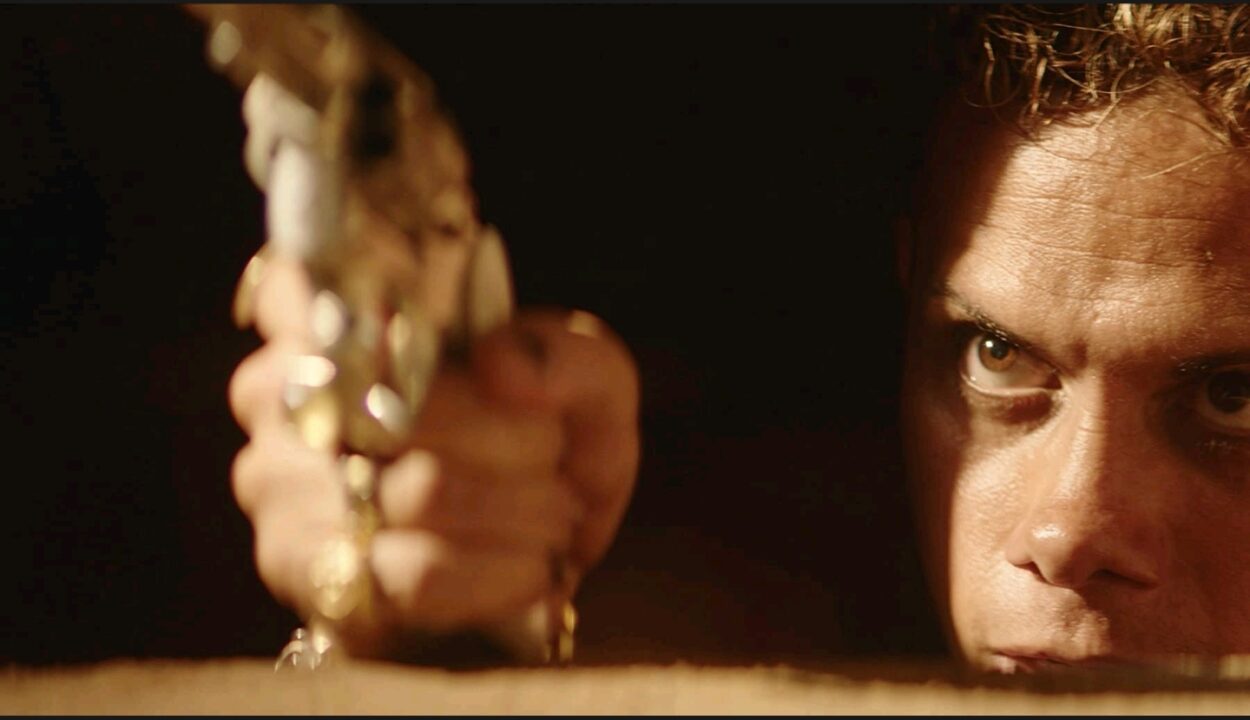