Carlo Di Palma’s Blonde in Black Leather (Qui comincia l’avventura – “Here Begins the Adventure“) is a buried treasure if ever they was one. There are no critic reviews for it on Rotten Tomatoes, none on Roger Ebert’s site, a few viewer reviews on Letterboxd, and that is about it. Finding a version to watch is task in itself as there has never been an official Blu-Ray or even DVD release of this title. For years, the only way to watch it was by a long out out-of-print VHS. That’s a shame and I hope this situation is soon rectified. Writer/director Di Palma is certainly no stranger to cinema lovers—he worked on Michelangelo Antonioni’s late period color pictures (Red Desert, Blow-Up, Zabriskie Point) and later in the 80s and 90s as Woody Allen’s cinematographer on 11 projects, beginning with Hannah And Her Sisters (1986) and ending with Deconstructing Harry (1997).

Di Palma and Red Desert lead actress Monica Vitti began an off-screen relationship during that movie’s production, which resulted in an on-screen partnership as well. Their projects were certainly less serious than the Antonioni films, as Vitti was yearning to shake off her sullen reputation and work in comedy. With Modesty Blaise (1966) and The Girl with a Pistol (1968), Vitti was indeed having fun (she actually started out working as a comedienne before working with Antonioni), and she very much enjoyed being paired with a partner to play with. One of those partners was Italian screen siren Claudia Cardinale (Fellini’s 8 1/12, Once Upon a Time in the West). In Blonde in Black Leather, the two prove to be a glorious screen duo.

Cardinale plays a launderette worker, sweating away from the steam and heat and having to put up with her male boss groping her whenever the impulse strikes him. Especially today in 2021, his blatant groping is quite disturbing to watch. The woman (her name is not given) works away when out of the blue, in walks an imposing, statuesque, confident force dressed from neck to toe in—of course—black leather. The figure leaves their helmet on, slides a rolled up item across the counter to the clothes cleaner and waits outside for the item to be ready. When the figure returns she removes her motorcycle helmet, revealing a woman with golden hair and a roguish smile. No name is supplied to her either, but we can tell from her eyes alone that the cleaner is transfixed by this leather-clad stranger. 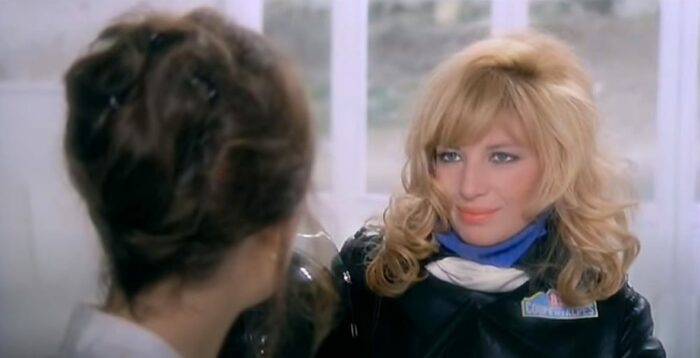 This inspires the worker to leaver her job (and her hands-y boss) in search of adventure herself. When the two next encounter each other, the Cardinale character hops onto the back of Vitti’s baby—her motorcycle—and together they roar down the streets of Italy during night and day. With the  heavy electric guitar and harmonica-infused score by Riz Ortolani providing the soundtrack to the women’s adventures, the movie kicks into gear. What starts out as a compelling road movie becomes a breezy comical farce that bears comparisons to two of the best mismatched companion road trip movies made: Midnight Run and Planes, Trains & Automobiles.

While Cardinale’s character is at first entranced and fascinated by Vitti’s wild and free-spirited personality, it isn’t long before she grows weary of the curious (and as we learn, embellished) tales of adventure. When hunger sets in, the two female road warriors quickly learn that life on the streets with no food and shelter is not such a thrill ride. Throughout the movie, Vitti exhibits a Han Solo-ish ‘leave it to me’ bravado that falls apart when she tries a little too hard to impress. For example, when attempting to con a farmhouse family out of their warm cooked supper through tales of excitement, she’s met only by loud bored belches from the male of the family. After enough tall tales, Vitti and Cardinale are locked out and unsure of where to go in the dead of night.

When Cardinale, fascinated by Vitti’s cherished motorcycle, hoists herself upon it alone, the bike powers to life and flies off a embankment in an instant, throwing Cardinale off as the bike rides down into a ravine and into a lake below. The two women are now stuck in the same fate: alone, hungry and near penniless with no mode of transportation. They bicker and blame each other for their predicament. Di Palma’s camera, which angled low and up towards Vitti’s during her entrance in the film, is now placed high, looking down as Vitti, in her leathers, now covered in dust, lies defeated by circumstances against a railing, along a lonely bridge on a long deserted road. On one side of the bridge is Vitti and the other Cardinale, distant from each other for the first time since they met. 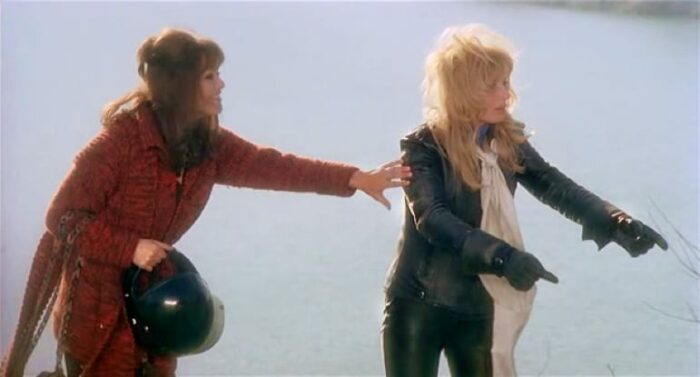 The second half of the film shows the two roles reversed, as the more desperate the pair’s situation gets, the more distraught Viltti’s character becomes. Cardinale becomes the calm and rational voice of reason, even when the pair realize they’ve stolen a car with a 13-year-old boy still inside. Vitti’s defenses have been knocked down now that she has no reason to hide behind her large helmet without her bike. The fact that she needs the voice and company of this stranger to help her get out of this predicament becomes a sore spot for her. The movie does a great job blending more farcical elements (which become more evident as it goes on) with an examination of who these women really are. The way Vitti was unceremoniously barred out of the farmhouse implies that this is probably something which happens to her often, and explains why up until this point in her life she has traveled alone.

When the episode with the boy comes to a close, the two women find themselves in a town surrounded by gangsters who look like they’ve just steeped out of either a Fellini or Coen brothers movie. After the two ladies get polished up—Cardinale with a haircut and in a new dress—Vitti takes great pleasure while a handsome young man shines up her leather outfit while she’s still wearing it. The ladies partake in game of roulette where we see that despite her wild claims, Vitti is a pro when it comes to playing cards. She wins big, which angers the local Don. The farcical aspect of the film is ratcheted up to 10 as the woman fight a room full of punks. A chase ensues, and the two women wind up in a train.

This short train sequence does a radical thing; Di Palma turns the pursuit into a 1930s-style black-and-white slapstick episode. In any other film might, this scene might seem jarring, but by this point, Blonde has certainly earned this moment. Di Palma would play around with the expectations of narrative film more than two decades later in Woody Allen’s Deconstructing Harry (1997), which featured a notable sequence where an actor (Robin Williams) had literally become blurry to everybody around him.

Pushing the farcical concept even further, the two wind up (where else?) but in the company of a traveling carnival. When they accidentally send the acrobat (Ninetto Davoli) miles into the air after being shot of a cannon, it’s obvious they’ve worn out their welcome there as well. The two hop on a horse and ride across the beach with the carnival folk chasing behind. From here, the story takes on the same grounded approach it began with. The two women part ways and in another vivid scene involving one of them being treated in a disgusting and unwanted manner by another lecherous male, the other shows up to save the other. Their journey together wasn’t an easy one, but like the two movies I previously mentioned, Midnight Run and Planes, Trains & Automobiles, a bond is formed between the two where both realize that they need each other more than they thought.

As mentioned at the beginning of this article, Blonde In Black Leather is not an easy film to find. It is not mentioned in film circles, perhaps overshadowed by the other work of its three main participants. Perhaps it’s because the original title, Qui comincia l’avventura (Here Begins the Adventure), confused fans or those expecting another L’Avventura (The Adventure), but it is no doubt a spirited romp, held up by the go-for-broke performances of its appealing lead actresses. I’ll bet that Vitti and Cardinale had more fun making this movie than any other. 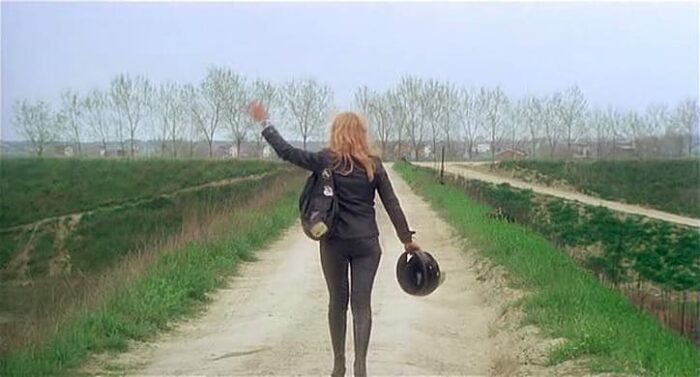