Lawrence Kasdan’s French Kiss is undoubtedly my favorite Meg Ryan movie, and one of my favorite rom-coms. I love the French setting, the premise, and especially the ending. Meg Ryan is a woman on a mission when her fiancé is swept away by a French “goddess,” and she aims to get him back, for better or for worse, until she unexpectedly falls for a Frenchman.

I remember watching it when I was little with my mom and grandma—anytime a rom-com was on TV, it was always the three of us sitting together, munching on popcorn, watching. That’s definitely why rom-coms hold a special place in my heart, especially this one.

Seen now, 25 years later, some elements about French Kiss may be a tad outdated, but it’s still a beloved and well-made romantic comedy.

The Elements That Haven’t Aged So Well

One of the things that always bothered me was Kate’s (Ryan) faith in Charlie (Timothy Hutton), even after he’s broken her heart and betrays her in every way. It’s clear that Charlie is freaked out about the white-picket-fence life Kate had envisioned for them, but I think Kate is too in love with that life to see how freaked out Charlie was at the idea. Actually, I think she’s more in love with that idealized lifestyle than she is with Charlie.

Charlie urges Kate to accompany him to France, but she declines, mostly due to her fear of flying. Charlie cheats on her there, breaks things off with her, and quickly becomes engaged to Juliette (Suzan Anbeh). Not only has Charlie abandoned her, but he’s also decided he’s not returning to his native Canada, and in a way, abandons his family as well. He’s obviously not the best guy, but this doesn’t deter Kate’s mission to bring him home and force him to love her again.

Even if Kate had succeeded in her original plan, how would her relationship with Charlie work afterward? Charlie would obviously still, on some level, resent her and the life that she wants. Who’s to say he wouldn’t cheat on her and run off again? How could she ever completely trust him like she once had?

They’re clearly not the match Kate thinks they are. Whatever spark brought them together has since been extinguished, and they clearly want different things and intend to head in opposite directions. Still, Kate hangs on for dear life. I think she’s afraid of losing the comfortable life she has seen herself heading toward and refuses to look at the problems in their relationship. She is brokenhearted, fainting when she sees Charlie and Juliette together for the first time, but she seems more driven than angry or hurt.

The fact that Charlie cheats on her, and Kate’s subsequent feelings over that event, are underplayed. Granted, French Kiss isn’t a dramatic movie, but Kate’s pain could have been played up, however slightly. The focus on Kate’s mission to win Charlie back takes precedence, and at times, it makes her look a little desperate and pathetic, as though she has no self-esteem. She does get some sort of revenge on Charlie in the sense that he realizes what he’s lost, but her crusade isn’t necessarily a vote of confidence in Kate’s character. She is a strong woman, and she does realize her self-worth when she lets Charlie go—and realizes who she truly loves—but it takes her a little too long to reach that point.

Kate really wants to hold onto her white-picket-fence dream. I believe that dream was a more common occurrence in the 1990s than it is now. That dream is Kate’s motivation, but I think that might be a little harder for audiences to relate to now—maybe that idea isn’t as fashionable, or even as feasible, in its original form, as it seemed in 1995. That’s not to say it doesn’t still exist; of course it does. It’s just that there are so many other dreams of being with your person and potentially raising children together that that idealized vision has evolved into several other variations. 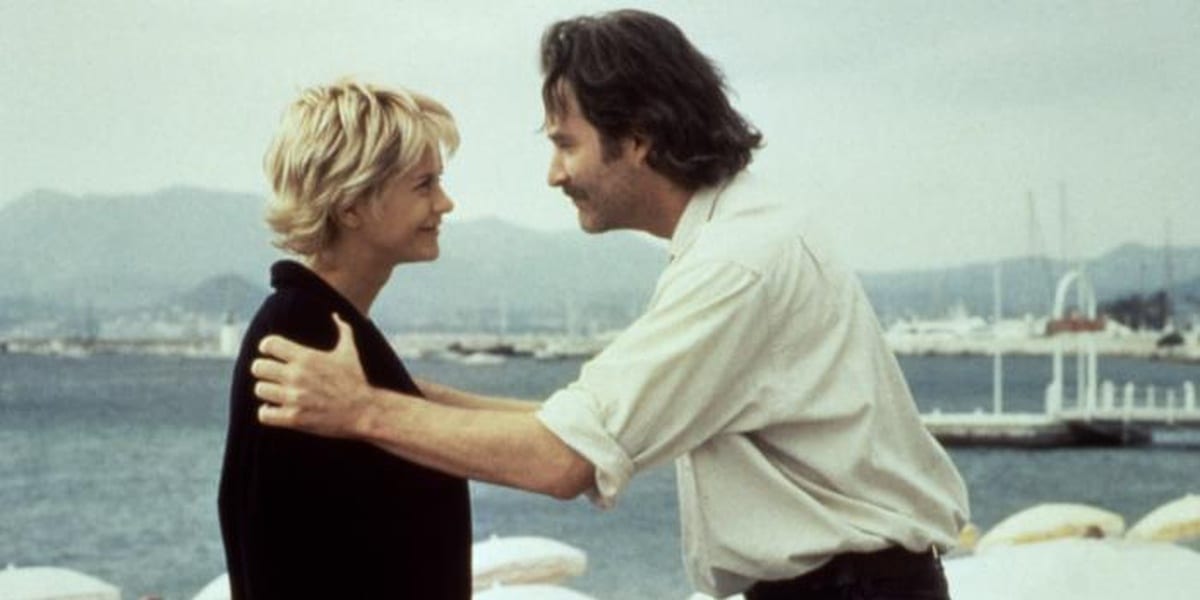 Kate never shares the chemistry with Charlie that she does with Luc (Kevin Kline). She and Luc butt heads at first, but it turns into something truly beautiful and becomes the type of meaningful relationship she never quite achieves with Charlie.

The Elements That Work

Never say never. Kate despises the French and spends a good portion of the film making snide remarks about them. It’s pretty much karma that she falls for a Frenchman in the form of Luc.

Luc, though a thief, really is a good man at heart, a man with a dream, just like Kate. He does use an unknowing Kate to smuggle in a diamond necklace and a vine cutting that he intends to use to purchase and start up his own vineyard, but because of this, it gives him the chance to get to know her and develop real feelings for her. They’re (mostly) honest with one another from the beginning, and they’re friends first, helping one another achieve their goals—Kate’s goal being Charlie, and Luc his vineyard. They seem like opposites, but they’re really not. They both want a happy ending, and it just so happens their happy ending is a mutual one in which they’re together and own a vineyard in France.

Kate mentions how distant her family is; it’s no wonder she desires closeness with others as a result. She does get that with Luc, and I presume with Luc’s family, whom she briefly meets. She gets everything she needs in one fell swoop, though she’s after something else entirely. Things work out in mysterious ways.

I love Luc’s character. He’s witty and suave, savvy and unpredictable. It’s easy to see how Kate is drawn to him. He’s exciting, but he’s also goodhearted. So is she—she gifts him her savings so he can buy his vineyard and avoid trouble with the police over the stolen diamond necklace, and of course, he comes after her and declares that he wants her. That’s my kind of happy ending.

The other thing that still works today is the theme of a clash between cultures and genders. Kate frequently struggles with the French, especially with the concierge at the hotel Charlie stays at in the beginning. Plus, she has trouble understanding Luc’s accent from time to time. Once she becomes less judgmental of a different culture, she accepts it and embraces it, which is an important lesson not just for her but for anyone who’s ever felt that way about a culture that is not their own.

The differences between males and females are brought up in different ways in the film. Kate and Luc discuss such differences, most notably when they disclose how they lost their virginities. My personal favorite, though, is when Kate, after having seen Charlie with his “goddess” for the first time, states that she’d never thought she’d be the kind of woman to say such a thing, but that “all men are bastards.” It’s the way she says it, combined with the devastated look on her face, that makes it funny, even though the circumstances of that humor are brutal. Luc takes her bad attitude and negative perception of men in stride and helps her find her stolen luggage, which also contains his precious vine and necklace, then heads after the thief, whom he knows. When Kate realizes Luc knows the man that took her bags, she hilariously declares, “Oh, of course you know him. All you bastards know each other!”

Of course, hers is not a permanent opinion. Clearly Kate doesn’t think Luc’s a bastard for too long, given she falls in love with him. Audiences can certainly relate to how Kate feels, having no doubt experienced such moments in which they despise the opposite sex for whatever reason, especially if they’ve been faced with a situation like hers—that’s part of what makes the whole thing funny 25 years later. Those age-old differences and occasionally low opinions of the opposite sex have appeared in film and television for years. It’s never really permanent, but Kate’s way of dealing with it could definitely be something she and Luc will later share some laughs about.

She and Luc have a good rapport. Luc will sometimes give Kate a hard time, albeit lightheartedly, as is the case when he declares she “must be one of the healthiest people in the world” when she states that “a healthy person is someone who expresses what they’re feeling inside—express, not repress.” The differences in their personalities actually appear to balance one another out, and it makes them both infuriating and exciting to each other at times—perhaps even both at once. It’s part of their chemistry and why they fall for each other. 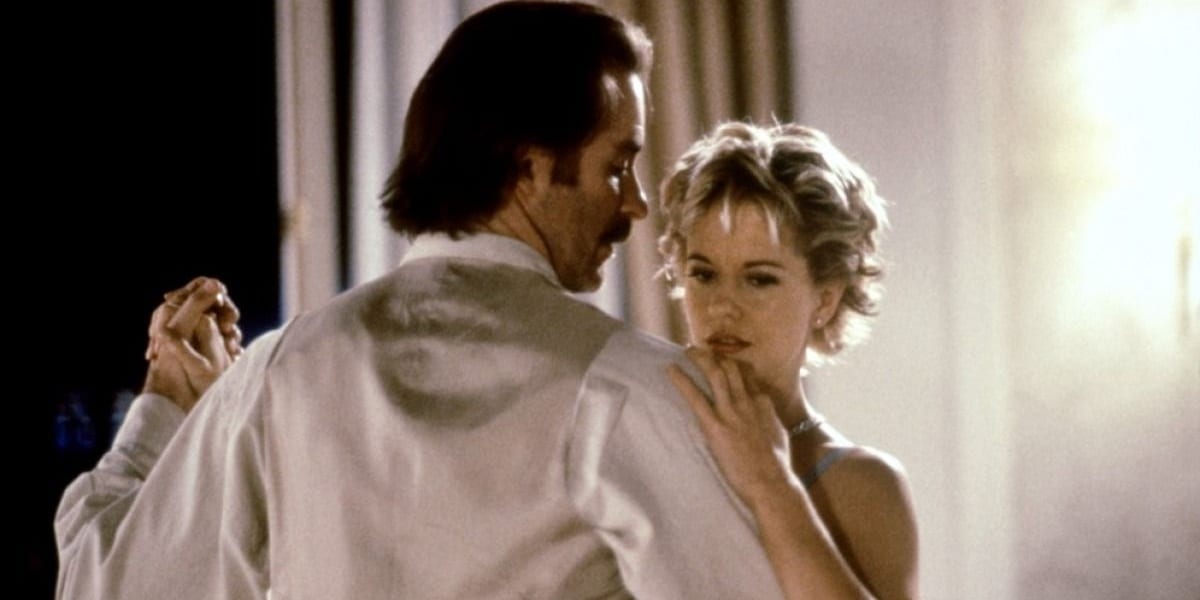 In any case, French Kiss is about the unexpected things, good and bad, that pop up in life, but whatever happens usually happens for a reason, and things turn out just fine—more than fine—for Kate and Luc. She has a zany adventure, sees beautiful French scenery, falls in love with Luc, learns a few life lessons, and gains a new home and a new life. Even more beautiful? She gets her happy place—she used to envision a stone cottage any time she felt anxious, especially when she was about to fly. Luc gives her that stone cottage and so much more; when her old life falls apart, she gets the dream life she’s always wanted.

Kacie is a freelance writer versed in various forms. She loves pop culture, screenwriting, novels, and poetry. She has previously written for The Daily Wildcat, Harness Magazine, Cultured Vultures, and Screen Rant, with 25YL being her newest writing venture.