Each month, dozens of new films are added to the Criterion Channel. While the rich selection of feature-length classic and independent films obviously gets a lot of well-deserved attention, I wanted to shine a little light on some of the short films. I believe that shorts should get a lot more attention than they typically do—they are breeding grounds of experimentation and non-traditional storytelling, and often are important outlets for marginalized voices.

April’s slate of short films is a little lighter than some of the previous months where over 35 shorts were added to the Criterion Channel, so I supplemented the selection a little bit with some of the shorts that are highlighted in the channel’s “Short + Feature” series for this month. While I liked many of the new additions, I was blown away by the “Short + Feature” selections, so they might be a little overrepresented in the list this month. Collections of newly added shorts include one that highlights films shot in their directors’ homes and films by German animation pioneer Lotte Reiniger.

While I don’t get into it here, Maya Deren’s short film Meshes of the Afternoon was added this month to the Criterion Channel and is a bonafide avant-garde classic. I touched on Meshes before when I wrote about trance films—an avant-garde subgenre exemplified by Deren—in relation to several of David Lynch’s films. I would highly recommend watching Meshes if you haven’t already, but felt like highlighting other films since I have already talked about it before.

While this article is exclusively focusing on short films that are on Criterion Channel, I’m also keeping track of all of the short films I watch in monthly Letterboxd lists, whether on Criterion Channel or elsewhere. I’ve listed the streaming service that I watched them on, with the films that I talk about in this article marked in the notes with two asterisks. Feel free to follow me and the lists on Letterboxd and feel free to reach out to me on Twitter if you want to discuss any of the films. Without further ado, let’s get into the films! 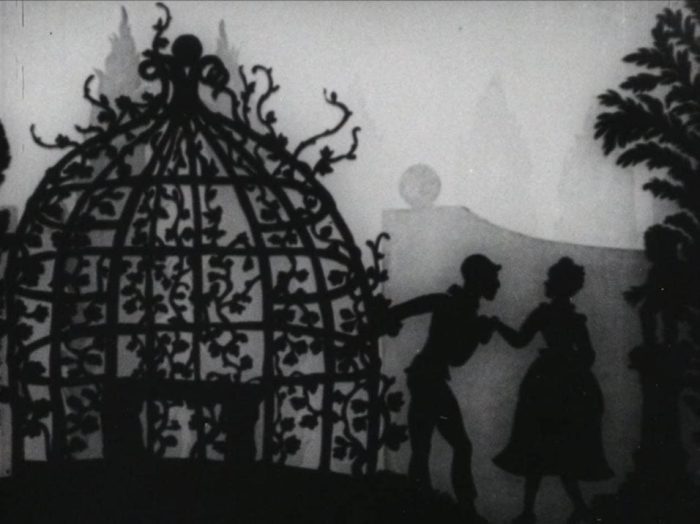 Lotte Reiniger was an early pioneer in animation; in fact, her film The Adventures of Prince Achmed is considered the earliest surviving animated feature in the world, predating Snow White and the Seven Dwarfs (the first traditionally animated feature) by over a decade. Reiniger primarily used a form of stop motion with cutout puppets for her animation. The cutouts formed silhouettes that served as the characters and scenery of her films.

While the conceit of Reiniger’s films may sound rudimentary, her animation style was in fact exceedingly detailed and ornate. Her style is on full display in Harlequin. The fluidity with which her figures move is at times stunning. The Harlequin plays a recorder or pennywhistle, and what first struck me about the short was the movement of his fingers as he played. Any sort of movement in a figure within the shots, outside of rudimentary limb movement (arms moving up/down, legs front/back, heads nodding, etc), would have had to be carefully planned and implemented. Seeing the fingers move really took me by surprise. The people and movements were not the only intricacies: there is also splendidly detailed foliage, and sets. Additionally, several of the figures and backgrounds are ornamented in a way that is reminiscent of the Baroque era whose music scores the short.

Much like Disney would later do, Reiniger generally used fairy tales and legends for her films. This short borrows from the tradition of commedia dell’arte, where the Harlequin was one of the stock characters. At the beginning of the short, the Harlequin is apparently in heaven dancing with other characters that will eventually appear later on, when he is literally plucked out of the sky by a giant hand and dropped onto a donkey. From there, he commits all sorts of mischief. Most of the short concerns him getting married, getting roped into sleeping with a noblewoman that he saves, and getting arrested. The plot is admittedly hard to follow at points, especially without intertitles, although I suspect that the original audience might have had more context for these characters and stories.

Although the audience can still get the gist of it, the plot isn’t really the star here. It’s truly incredible how effectively Reiniger could convey emotions with just a simple head tilt or arm movement. While I didn’t feel the plot was quite as easy to follow in Harlequin as some of the others in the collection, it was the one whose animation felt the most virtuosic, and that was enough for me. 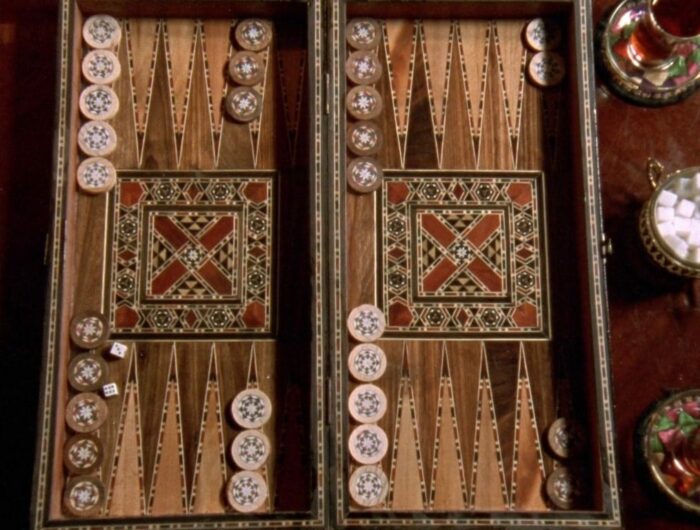 Ramin Bahrani has the unique distinction of having been featured or referenced in all three of my articles about Criterion Channel short films to date: I looked at his short Plastic Bag for February’s article, which I then briefly referenced in March’s article.

Much like Plastic Bag, Backgammon strongly displays Bahrani’s socially conscious mindset. Instead of being an oddly affecting environmentalist story about a sentient plastic bag voiced by Werner Herzog that also manages to say a lot about humanity and religion, Backgammon looks at an immigrant story through the lens of a young girl born in America to immigrant parents.

The young girl, Sheema, has a lot of difficulty with her family. The children that are her age are exclusively focused on American pastimes, like watching sports and playing video games. Sheema, on the other hand, wants to play backgammon with her grandfather, who dismisses her desire by claiming that she doesn’t know how to play and telling her “This game is not for you.”  Sheema’s inability to fit in with either part of her family—the younger members that she has more in common with but is disinterested in and the older members who she is interested in but reject her—causes her to act out. Backgammon’s endearing and thought-provoking inversion of normal immigrant tropes made it stand out to me. 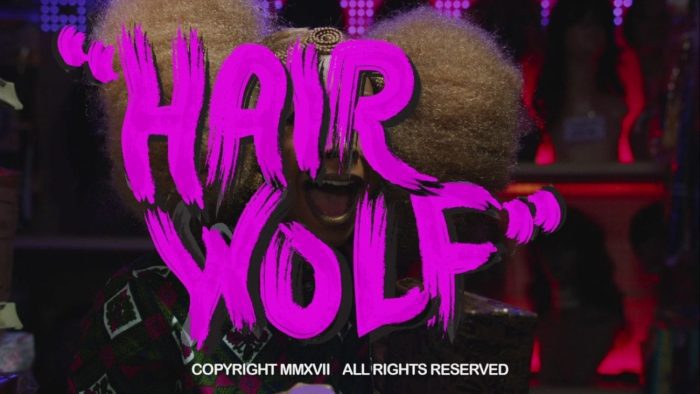 Hair Wolf is a hilarious and scathing satire of race, appropriation, and identity using horror tropes. The short starts out in a beauty supply store, and the audience can tell that something different is happening from the outset because one of the mannequins in the window has a demonic, Joker-esque smile. A black woman named Cami is standing in front of a shelf looking at the products. The lights flicker, a can of hairspray rolls to a stop by her foot. She screams as the retro title card appears.

After the title card, we’re introduced to Cami’s friends at a hair salon. She recounts that at the beauty supply store, telling them that “There’s something f*cking strange in the neighborhood.” A white woman had come up to her and grabbed her hair, pulling some of it out. Suddenly, the same woman shows up at the salon door, asking for braids in a zombie-like tone. The friends humor her until they begin to “turn” one by one, each falling victim to the zombie Instagram model. Can the friends escape with their lives, and their identities, intact?

If you love Nicolas Winding Refn’s Drive, Ramona is definitely worth checking out. Both films are deliberately paced revenge-thriller neo-noirs with at times shockingly personal violence. It would be easy to dismiss Ramona a Drive ripoff if it wasn’t so spellbinding in its own right.

Ramona only features a handful of shots—just four by my count—during its entire 20+ minute runtime. The lengthy shots ramp up the already palpable tension in the short, since most of the audience is subconsciously trained to expect a certain length shot before a cut. When that cut doesn’t happen, a subtle tension is created.  I’ll admit that I’m a sucker for long takes, so add this tension to an already tense film filled with unexpected and shocking moments, and you get an easy recommendation from me.

In my eyes, the first shot—lasting approximately eight minutes before a cut—is the most fascinating. We start off with a woman sitting in a car smoking a cigarette. She seems to be contemplating the house she is sitting in front of. She walks into the house, finds a man lying on a bed, disrobes, and begins to seduce him. At this point, we have no idea who any of these characters are or what is going on. Suddenly, she brutally murders the man, made all the more impressive by dousing them both with blood—apparently using practical effects—during an unbroken shot. The woman (who is not necessarily the titular Ramona) gets up, finds some graphic photographs, and returns to her car, where she corrals a bound and gagged man that is trying to escape. The man’s presence shocked me when I first saw the short, but upon rewatch I noticed that he was in the car in the opening moments of the short, although (clearly) he was easy to miss. Once she gets him back into the car, she lights up a cigarette and drives away.

The opening shot is effective for several reasons. One is obviously the long take, but also the audience is dropped into a story that is effectively already in progress. Unless you happened to notice the bound and gagged man in the car before she left it, nothing to this point had prepared the audience for this. The contextless seduction that suddenly shifts to violence is incredibly jarring. Just as the audience is still trying to process what they just saw, she arrives back at her car to find the bound and gagged man trying to escape. While the effect is troubling, the audience yearns to glean more information and find out what is happening. While there are no concrete answers given, the short never stops being mesmerizing.

This is just a taste of the newly added short films on Criterion Channel in April! What were some of your favorites? Was there a filmmaker whose filmography you’re excited to dive deeper into? Let me know in the comments or on Twitter, and I’ll be back next month to look at some more short films!