The manner of filmmaking, like most other art forms, can result in a powerful work depending on the amount of collaboration during the creative process. Just as the westerns of Sergio Leone utilized cast and crew from various countries with different spoken languages to create a strong, unifying film experience, Nagisa Ōshima’s Merry Christmas, Mr. Lawrence (1983) combines both actors and musicians from the geographically and culturally opposite countries of Japan and England to make one of the most emotional watching experiences put to film. As the story revolves around British POWs in a Japanese prison camp during WW2, Ōshima highlights the tragedy of war between opposing countries through the various scenes of violence and heated ideological debates between the British captives and their Japanese captors. 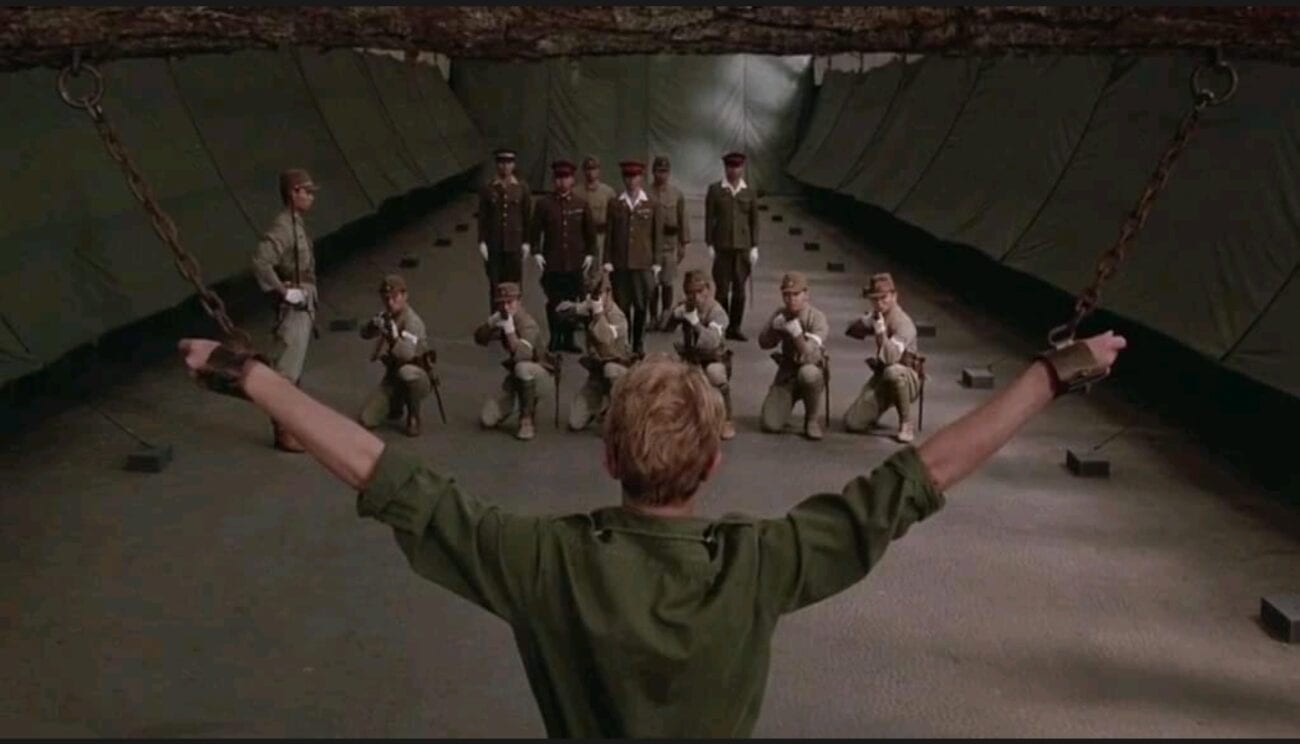 From the first five minutes, the brutal nature of the film is revealed when Seargent Hara (Takeshi Kitano) strikes a blow upon the head of a nearby British captive interrupting Colonel Lawrence (Tom Conti) from leaving with Hara away from their barracks to witness a nearby commotion. This moment is a powerful tone-setter for the rest of the film as the British captives’ attempts at questioning their captors’ actions and commands are met with rapid and overbearing violent reactions from their captors. The violent action, which is also shown in a stationary medium-shot, seems even more graphic due to its realistic filming method without any quick cuts to show or escape from the impacts against the captive’s bleeding head. Nagisa Ōshima, who exposed pairings of extreme sex and violence within his controversial landmark film In The Realm of the Senses (1976), and the use of violence by the Japanese government in Death by Hanging (1968), bravely exposes the harsh treatment that his homeland perpetuated against captive allied soldiers throughout WW2 in this film. Seargent Hara, who seems to have a periodic rapport with Colonel Lawrence, still chastises his British captive throughout the film for not committing suicide out of shame due to being captured by the enemy. This fascination of virtuous death by the Japanese military characters is often juxtaposed by the British captives who all try to work together to survive their internment, never downplaying the needs of their heavily injured and sick companions that would otherwise be seen as a waste of time in the honor-bound Japanese military ideology. 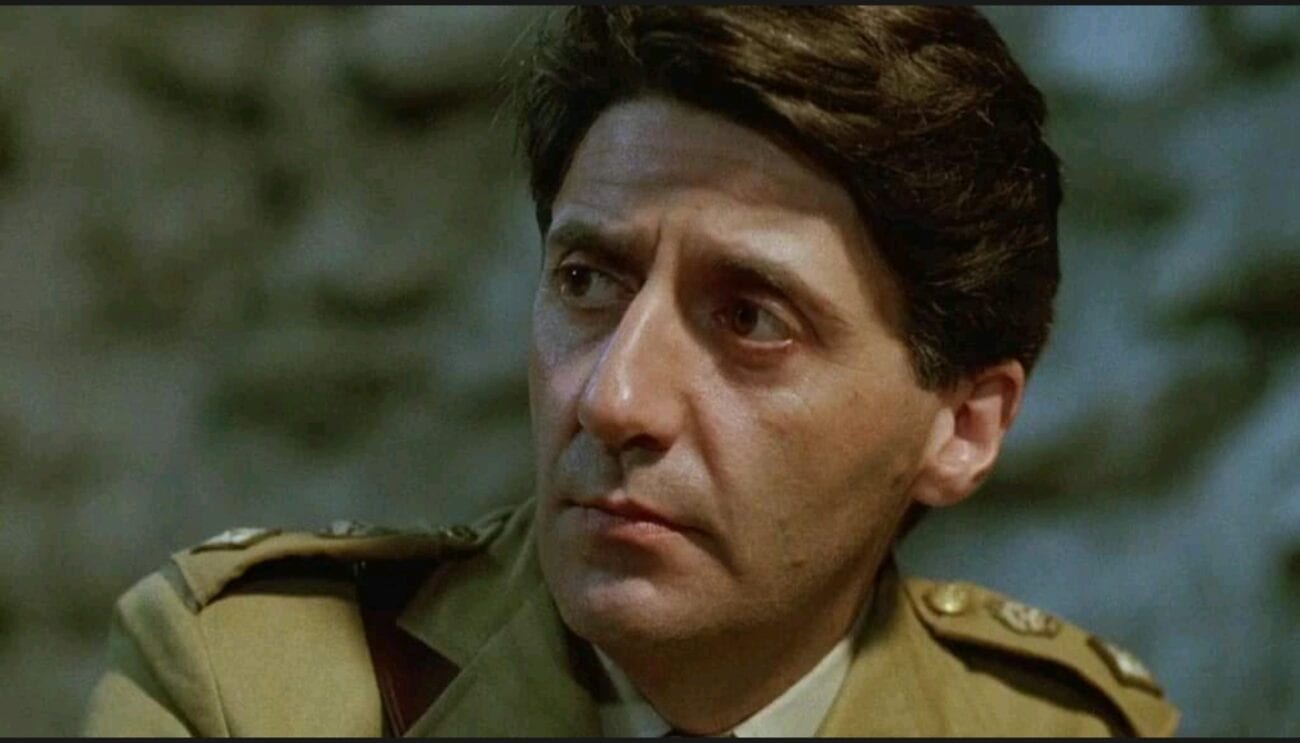 When a Korean Guard and Dutch captive are captured and exposed after having a secret homosexual encounter, Hara humiliates the Korean guard by trying to force him to demonstrate the sexual acts he performed on the Dutch captive surrounded by Japanese soldiers and Lawrence. Lawrence, on the other hand, is outraged by Hara’s sadistic behavior and tries to command the demonstration to stop before he’s quickly silenced by Hara. This scene becomes a powerful underlining tone throughout the rest of the film as the acts of both physical and emotional love between men of vastly different countries and cultures are met with shame and mockery from a rigidly masculine society that frowns upon homosexuality; let alone between men from two warring countries during a period where homosexuality was still criminalized in countries like England during WW2. When the character of Major Celliers (David Bowie) is eventually introduced during a wartime trial scene which is overseen by Japanese military officers including Captain Yanoi (Ryuichi Sakamoto), a desire of possible romance is established between the gazing Yanoi and the presented Celliers. Ōshima highlights the fascination in a slow but increasing manner as the camera shifts from the center of the courtroom where Celliers stands, shifts over to the left side of the room where Yanoi sits, and zooms in on his staring face, making the desires of Yanoi apparent to the audience through the purely visual setpiece without the use of auditory hints. Ōshina is also able to capture the immaculate beauty of Bowie’s character as he’s dressed cleanly and placed in a formal setting during his introduction, a total opposite of the film’s beginning in the prison camp where Lawrence and the other POW’s wear sweat-stained and tattered uniform clothing that has shown signs of intense labor in the tropical climate. 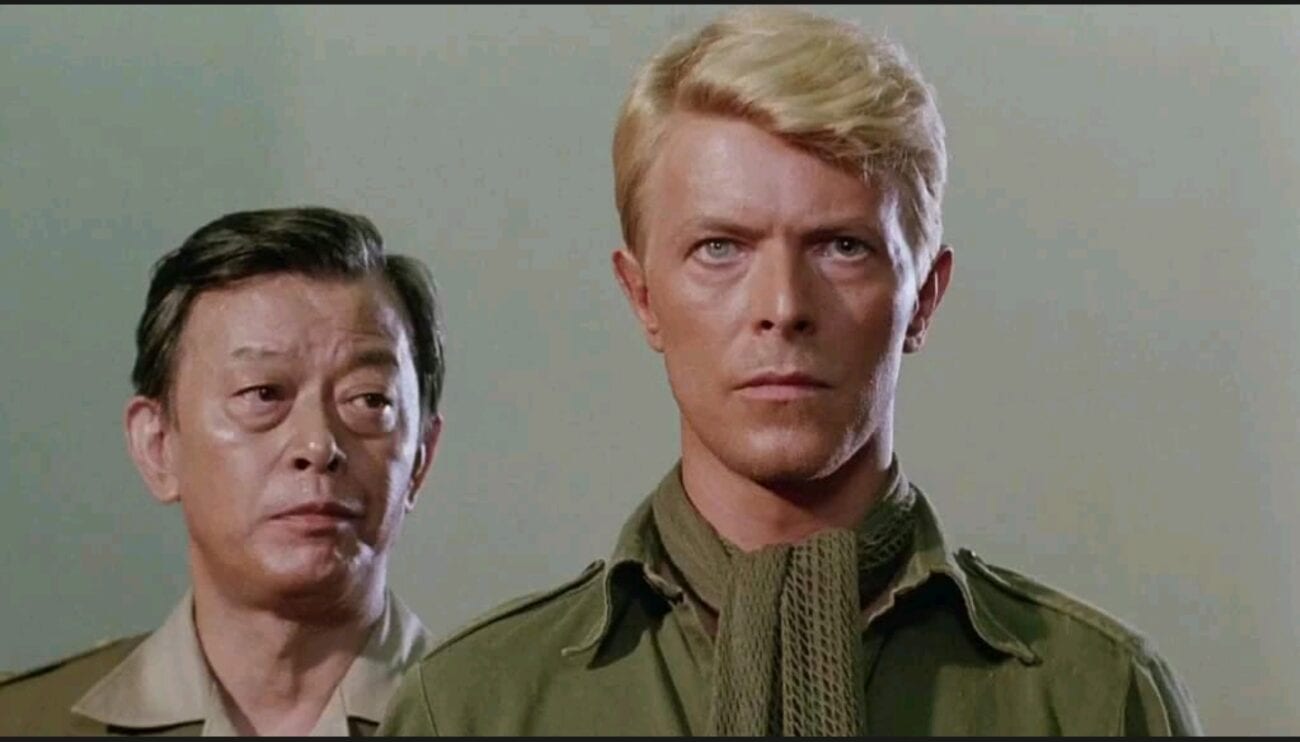 As Celliers arrives at the POW prison camp, the main conflict between the British prisoners and the Japanese guards becomes apparent. When the Korean guard is forced to commit seppuku in front of a large audience including the Japanese guards, the British POWs, and his Dutch lover, the tragic consequences of this forbidden love between men from fighting countries are directly revealed to the audience. The anxiety of the Korean guard preparing to stab the sword in himself, while a Japanese soldier stands nearby to cut his head off after the blade cuts the abdomen, builds exponentially as the camera holds still on the crying and afraid Korean man while the Dutch lover wails hysterically, creating a nerve-wracking amount of tension as the audience awaits the brutal act of ritual suicide. Furthermore, as the Korean man writhes in pain due to his abdomen being cut by the sword and struggling in the ground, the nearby Japanese soldier yells at him to raise his head to be able to decapitate him due to only being able to strike his shoulder with his sword, making the death appalling for any spectators watching the film, just as the British POW’s are disgusted and horrified by this brutal method of death. This segment of suffering becomes even more tragic as the Dutch lover bites his tongue off to kill himself after the Korean man dies, showcasing Ōshima’s tenacity to examine the brutality of his home country’s military during WW2 where nationalism was at its peak throughout the world. When Celliers picks flowers to feed the other POWs and himself in the camp during forced starvation due to perceived spiritual laziness, and is later caught by the Japanese guards, he taunts Yanoi by claiming he is a possible evil spirit sent to ruin him before being locked up in solitary confinement. This act of taunting is an effective showcase of Celliers’ resolve as the inquisitive Yanoi is directly exposed as an unusually curious man towards Celliers, allowing Celliers to taunt the ego of the rigid military officer that strives for control and discipline within the camp. This moment also reveals the opposing characteristics of the two men as Major Celliers is shown laughing and chewing the flowers aggressively while Yanoi shows barely any emotion and has a perpetual intense stare towards Bowie’s character. 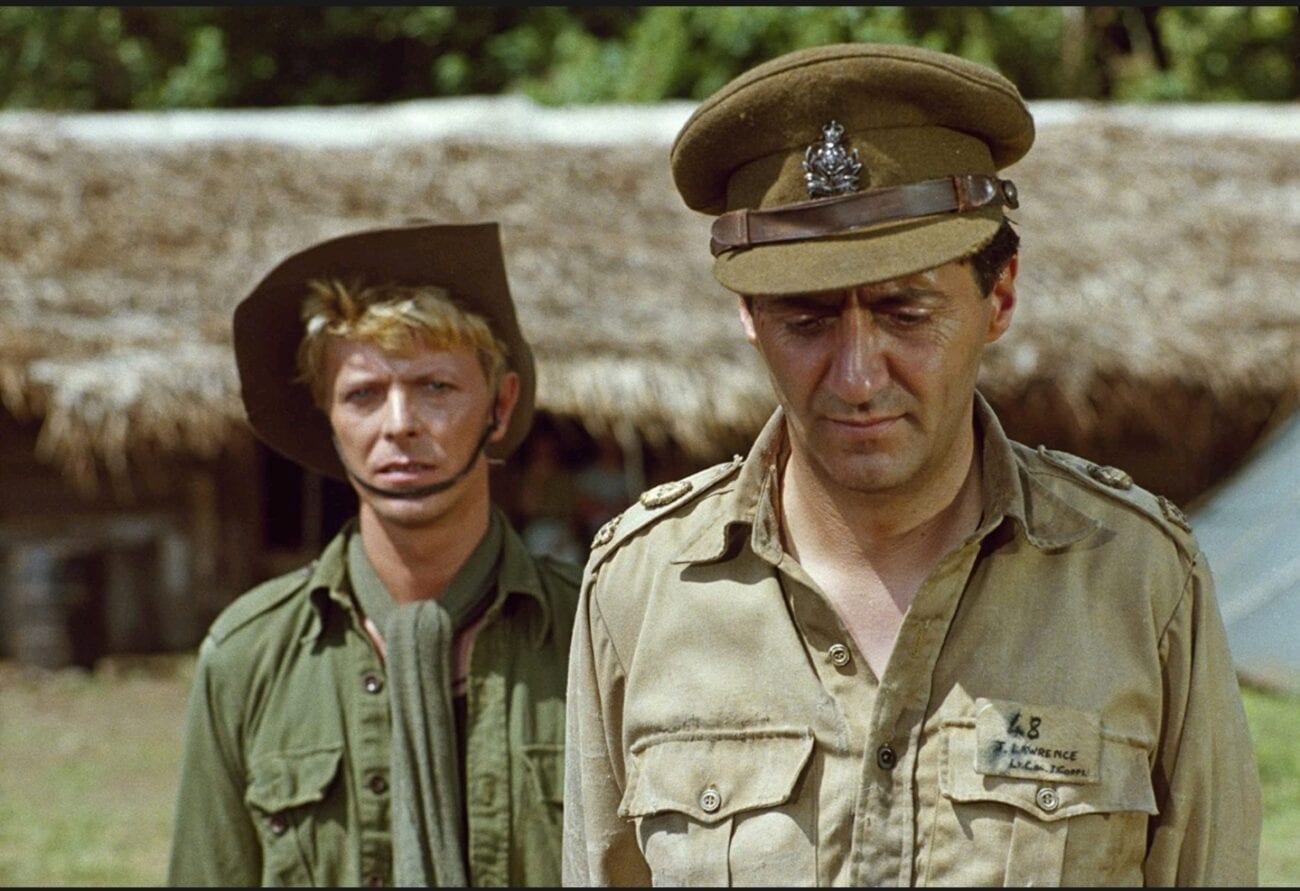 As Yanoi demands that the POW’s gather information due to POW representative Hicksley (Jack Thompson) not giving the Japanese any useful information and prepares to execute him, the film’s climactic moment takes place when Celliers breaks formation and steps towards Yanoi, kissing him on both cheeks before being beaten and restrained by the other Japanese soldiers. This power of this scene, just like many other pivotal scenes of conflict and tension, comes from the intense musical score of Ryuichi Sakamoto (who took his debut acting role within this film), who holds onto an intense droning noise as Hicksley awaits his execution before the instruments kick in as Celliers walks towards Yanoi and performs a life-saving act of compassion that distracts from Hicksley’s execution, but is ultimately fatal for himself. This passionate moment is made even more powerful as the film’s frames slow down on Yanoi’s shocked facial expression as Cellier’s kisses both sides of his face, extending the brief action into an everlasting display for the audience. After Celliers dies buried in sand and Yanoi cuts the hair from his head before bowing and walking away, the film shifts forward to 1946 as Lawrence meets with Hara the night before his execution due to war crimes. When Hara and Lawrence reminisce on their past Christmastime celebration in the camp and Lawrence prepares to leave, the camera zooms into the face of the smiling Hara as he wishes Lawrence a merry Christmas. This final frame becomes a tragic moment as both men realize that the war that caused their countries to fight each other was unnecessary and has caused more suffering with the deaths of both Celliers and Yanoi (who was executed offscreen due to war crimes) than any positive outcomes that could have possibly arrived after the war ended. Furthermore, the film’s final lines from Hara wishing Lawrence a merry Christmas is even more heartbreaking as both men could have been great friends at another time due to Lawrence’s expertise in the Japanese language and positive memories in the country before the war broke out, creating a sense of sorrow that while the allies won the war overall, victory cannot outweigh the suffering that men face during wartime, and the grief felt after a war ends. 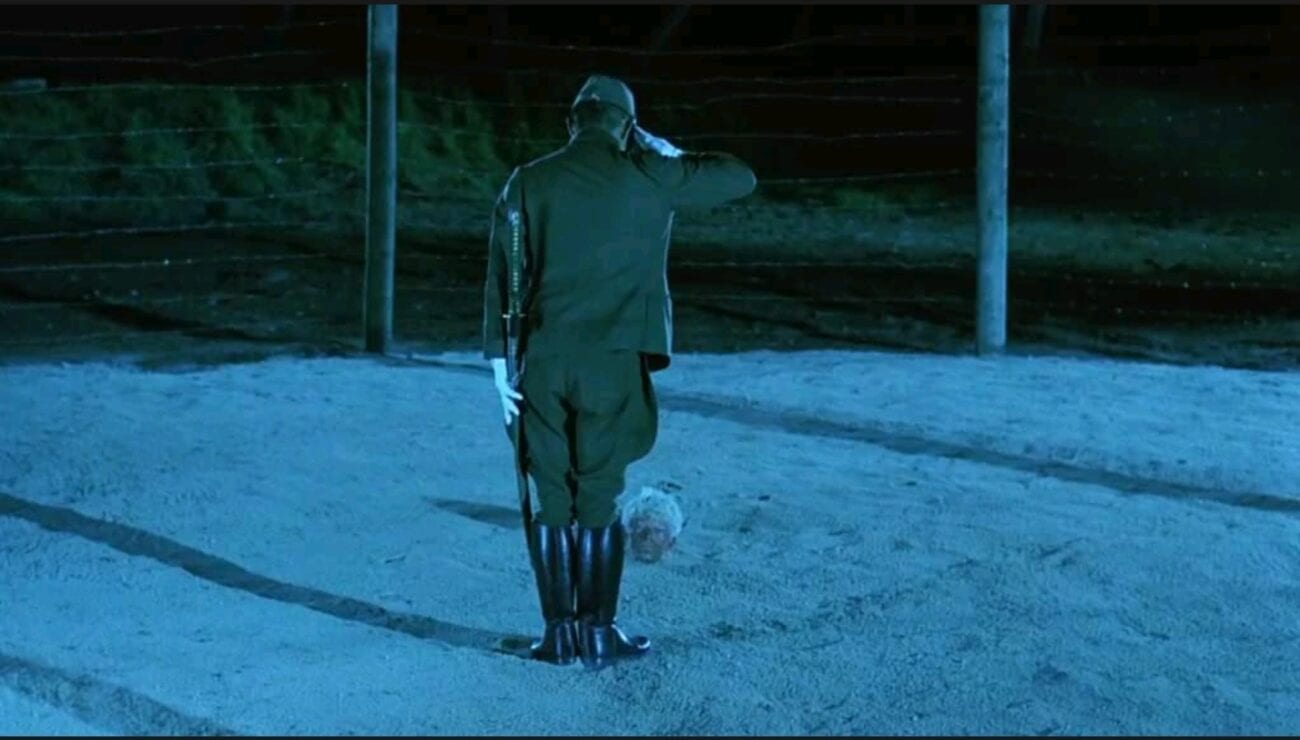