It was around high school, when I was just starting to write and think critically about movies, when I discovered William S. Burrough’s Naked Lunch. The book utterly destroyed my perception of what writing could be, as Burroughs bent the 26 letters of the English language into an abstract nightmare, a haunted house built up with words in service to a dark, propulsive feeling. Naked Lunch wasn’t so much about plot or story or even characters as it was about violently cracking open and spilling the content of Burroughs’ head onto the pages of a paperback.

Whenever I have a tough time shaking off writer’s block, I put on the Naked Lunch audiobook and remind myself that writing doesn’t have to be a journey, or a thesis, or a conversation. It can be a grenade, a pipe bomb full of pain, fear, humor, and the impossible. 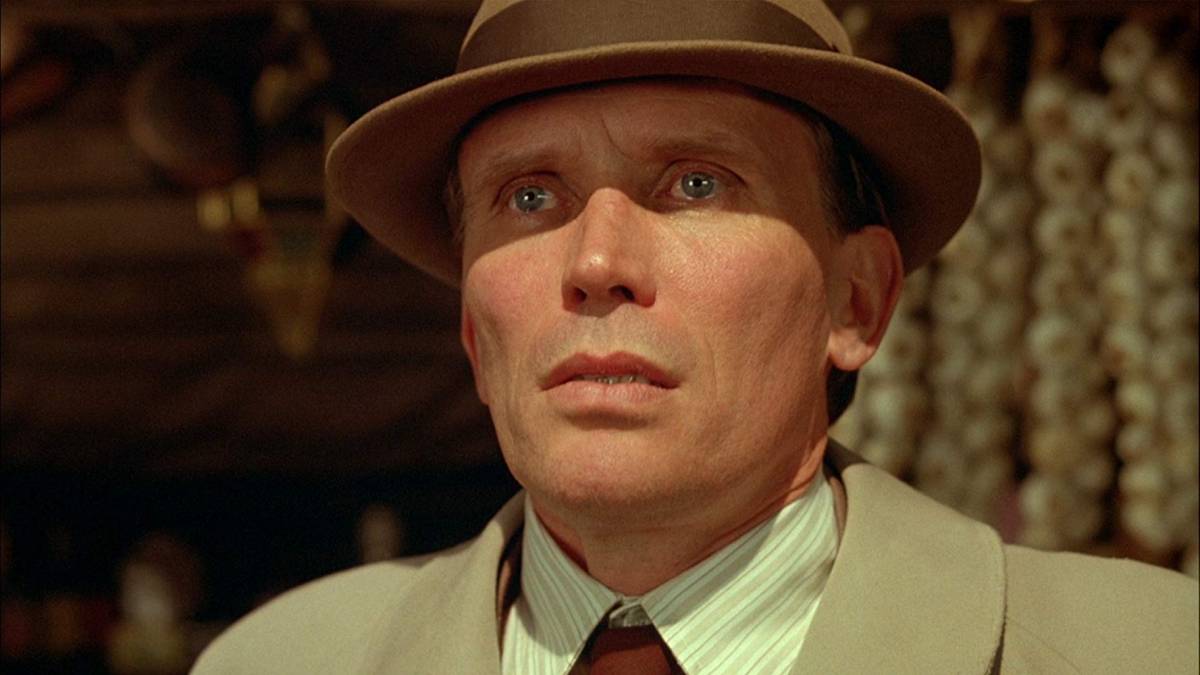 I had a similarly potent but different feeling when I first met the work of David Cronenberg. At once starkly intimate and almost medically indifferent, movies like Videodrome and The Fly infected my imagination and promptly launched the Canadian biology-major-turned-filmmaker into the pantheon of my personal Greats. In his movies, I came to understand that the surgical cool of science fiction aesthetics could be married with the hot blood of romantic, character-driven storytelling.

Despite the revelatory impact that both these creatives had on me, I had my doubts when I learned about Naked Lunch the movie. How could anyone, even someone as talented as David Cronenberg, find sense in a book so intentionally and spitefully devoid of sense? Of course, as soon as I started watching, I realized I had nothing to worry about. Cronenberg took the unsettling, warped spirit of Burroughs’ book and brought it to twitching, pulsing life.

Rather than try to stuff the word-vomit madness of the novel into a plot-shaped container, the film instead incorporates aesthetics, atmosphere, and characters into a plot cobbled together from vignettes from the Naked Lunch novel, other Burroughs works, and details from the author’s own biography. The film then becomes a hazy, acidic layer over a chapter in Burroughs’ life story, warping and melting it just as the drugs and chaos of the Beat generation warped and melted it in real life. 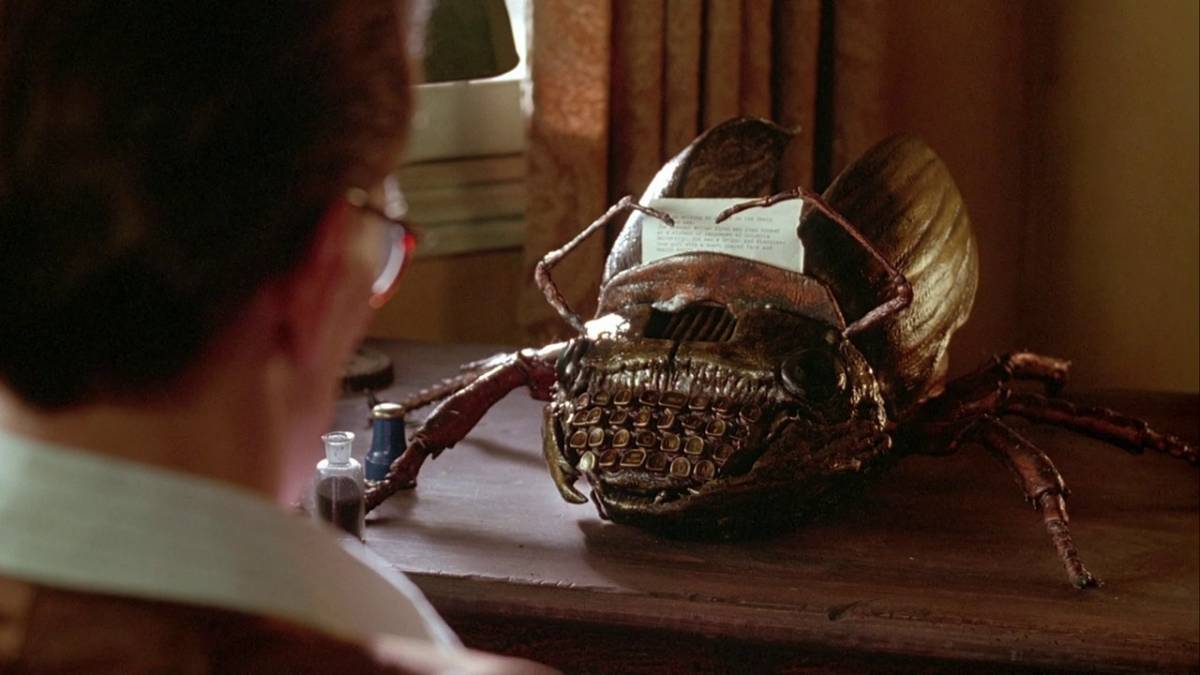 Our stand-in for Burroughs and the many-named narrator at the heart of Naked Lunch is Bill Lee, played by Robocop actor Peter Weller. His cool and calm, contrasted with an ever-evolving narrative of drugs, bugs, doppelgangers, and body horror, makes for something not unlike a private-eye noir story set in a narcotic version of Hell. He’s charming and slick, but there’s something in his eyes, in the lazy ways he moves his arms and legs through the space of film, that makes him not quite relatable. We do not become empathizers, we become witnesses, an audience of medical students above an operating theatre watching the fragility of the human condition play out in the hands of an expert, Cronenberg.

The various diseases and afflictions called out by our mad doctor are thrilling, entertaining, and repulsive in equal measure. When Bill Lee, an exterminator at the start of the movie, begins to hallucinate from the bug powder he uses, we feel his unease, his sweat, his tactile discomfort when a giant cockroach suddenly appears and begs Lee to rub bug powder on its fleshy, exposed anus. 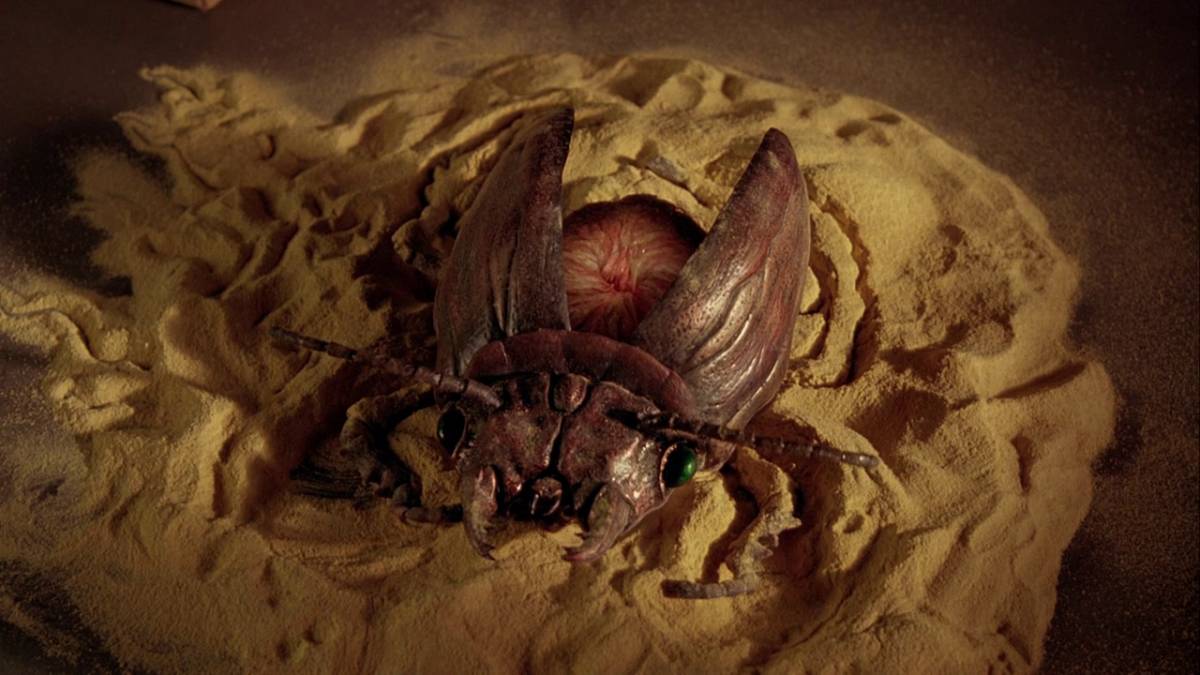 Perhaps that is the masterstroke behind Cronenberg’s adaptation. Rather than simply depict the harrowing journey through drugs that Burroughs details in his story, Naked Lunch’s film transposes all the drug use to abject and strange activities, substances like bug-killing powder, powdered insides of giant centipedes, or the thick, soupy excretions of bizarre, sugar-craving aliens known as Mugwumps. It’s unsettling to watch addicts succumb to their addictions, but unfortunately, it’s something we’ve seen before. We see heroin addiction and opioid abuse in the news and pop culture and become desensitized to them. The more we see, the harder it can become to truly grasp the nightmare of hardcore drug abuse without a disturbing new coat of paint. Hence, bug anuses and alien ejaculate.

Cronenberg does the impossible by creating a visceral, sensual visual metaphor for drug use that engenders the appropriate reaction. The fleshy, tactile nature of the centipedes, sometimes three-to-four feet long, being stripped of their bleeding, pulsing meat disgusts us. The slick, glossy Freudian look of the Mugwumps makes our stomachs turn. We finally understand the abject vileness of the world of a junkie, all thanks to the fearless prose of Burroughs and the visual imagination of Cronenberg. 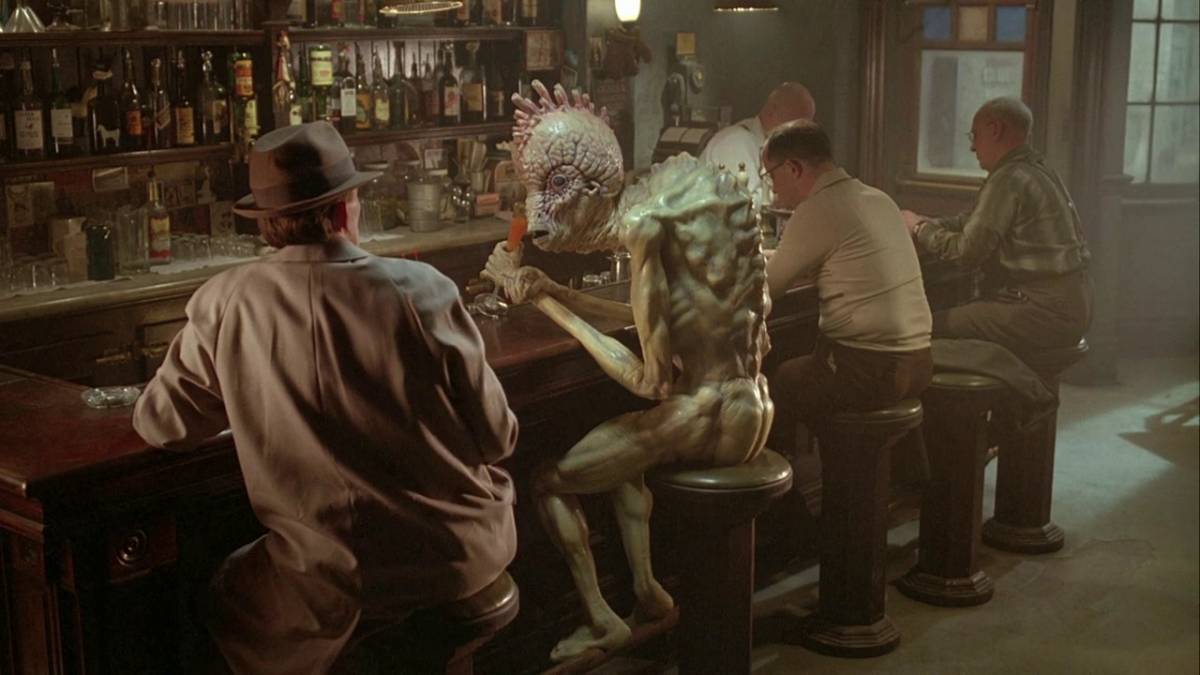 The film takes on a second layer of meaning when the cockroach from Lee’s hallucination becomes a typewriter Lee uses after being recruited as a secret agent. The fusion of Lee’s drug-induced fantasies and his creative outlet tracks with Burroughs’ own process. His writing becomes a mission, an obligation to forces greater than himself. By making his writing a living thing, complete with legs, a voice, a personality, and an anus, Cronenberg makes plain the connection between the pathos of Burroughs’ prose, the depths of his addiction, and his fluid sexual nature.

Naked Lunch then becomes an exploration of Burroughs’ mind, too. Cronenberg never shies away from the more fantastical aspects of the source material, instead presenting them as practical, tactile special effects that reinforce a world in which the various specters of drug abuse and paranoia become real, as real as they ever were to Burroughs. We get a rare insight into the pleasures, pains, and fantasies of one of the 20th century’s most interesting and influential madmen, all told and filtered through the masterful hands of speculative cinema’s most bizarre filmmakers. 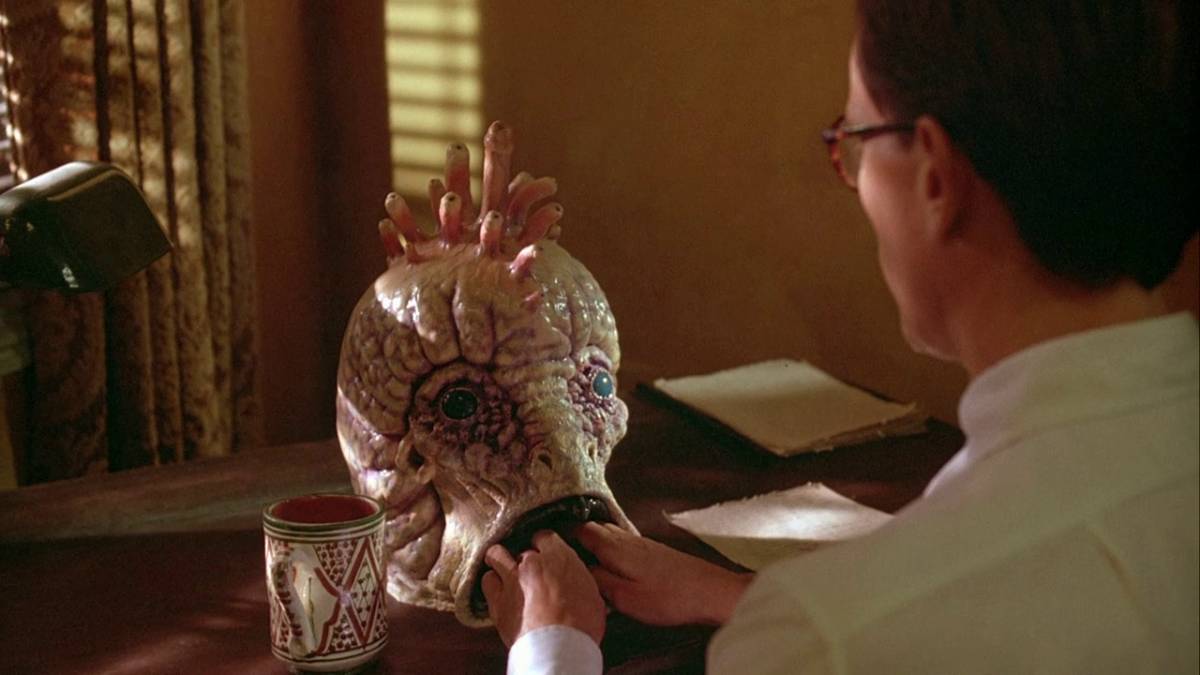 For a lover of Cronenberg, the movie is one of his strangest, strongest, and most interesting. For a lover of Burroughs, the movie adapts his works into a digestible, comprehensible story that distills the garish horror of his imagination into something we can finally see off the page and out of our imaginations. For fans of both, Naked Lunch is a cinematic miracle well worth watching. Turn out the lights, lock up your typewriters, and fall into one of the trippiest movies from one of the trippiest directors.

Gus is a horror critic and fanatic with a passion for giallo, animal attack films, and Vincent Price. When he was a kid, he had to leave a stage production of A Christmas Carol because it was too scary, now look at him. He can't wait to hear your Top 5 Horror Movies.