There’s a soul-baring and detrimental dialogue exchange in Joe Bell between the husband and wife played by Mark Wahlberg and Connie Britton that epitomizes the chief flaw of the movie itself. Wahlberg’s title character is asked whether he’s doing his cross-country walk for awareness or forgiveness. His answer reveals his, the movie’s, and the actor’s misshapen perspective.

Directed by Reinaldo Marcus Green (Monsters and Men, the upcoming King Richard) and based on actual events written by Brokeback Mountain Oscar winners Diana Ossana and the late Larry McMurty, there’s a fair story to share here. The real Joe Bell dropped everything after the suicide of his gay teenage son Jadin to walk from Idaho to his son’s dream destination of New York City with the goal of talking with any audience along the way about the damages caused by bullying. There is, undoubtedly, benevolent intent present, both in the man and the movie seeking to chronicle his 2013 journey.

Wahlberg plays Joe, a bearded blue collar father of two. Built with a surly temper fueled by impatience and warped righteousness, Joe has uncomfortably come to terms with his oldest son (excellent newcomer Reid Miller) coming out as gay. At school, Jadin is part of the cheerleading squad and has gained a small group of supporters. Unfortunately, his existence and standing has drawn greater malicious ire from the jock country boy stereotypes you would expect to target and berate those different from them.

When Jadin’s parents bring the incidents to the school principal, the administrator suggests Jadin get counseling. It takes the smarter-than-the-room teen to quickly retort that it’s the attackers who need it, not him. That’s ringing the “presenting the obvious” bell alright. In a later conversation along the same lines, Connie Britton’s Lola answers Joe’s question of “Everybody’s against bullying, ain’t they?” with the almost instant answer of “No, or this wouldn’t have happened.” Joe Bell rightfully calls out this systemic issue of bullying that has many facets. Admirable and true, no one movie or single man’s march can hope to encompass all that.

Echoing another presentation of the obvious and true to the misplaced norms of competition and domination, Joe’s first reaction to his son telling him about the abuse he’s receiving to question why he doesn’t fight back “like I taught you.” This feels like another measure of simple plainness in the realm of men being more than their physical stature. Principles, even the ones that beget calmer traits within men, are stronger than fists because they are truer and more formative. It takes Jadin for Joe to see that kind of mold of a man.

Joe’s answer to all of this and the loss it created is to voice his conflict with others. Needless to say, this gruff sermonizer is not the most engaging keynote speaker. Greater than the mouthpiece, who is actively listening to his message and needs to hear it? Who isn’t and who doesn’t? Joe Bell becomes the uphill battle of rattling tangible change in the “pay them no mind” hypocrite crowd that won’t listen in the first place. Talking tolerance is not something that ignorant cross-section is open to, meaning the movie too isn’t going to be fully heard either, even if the mountainous terrain captured by cinematographer Jacques Jouffret (Bloodshot, Mile 22) give this mobile pulpit an inviting and heavenly canvas.

Joe knows this deafness because he was one of those people. His wrongful actions expose a complicity with every vision, rehashed memory, and spiritual step with his departed son. How does one erase or correct that? That’s the dramatic rub of Joe Bell that circles all the way back to the questioned goals of awareness versus forgiveness. The last-mentioned weight is the stronger of the two, which shows this movie’s veered compass amid the personal penance. Again, internally and externally, the question is asked of who this is for?

On the positive side, this is a direct reminder, at least to this writer, that underneath the many historical and heroic gloryhound roles he scores, Mark Wahlberg can slow down and act. Initially, playing a hardass having his nose rubbed in his wrongs in an attempt to soften hardness is zero stretch for the Bostonian. In Joe Bell, the fatherly guilt on blast, especially when piped through Mark’s masculine speakers and that drama plays out heartily. Quite frankly, it would be awfully nice to see the now-50-year-old Hollywood star continue to play his age and shirk the bulletproof aura. 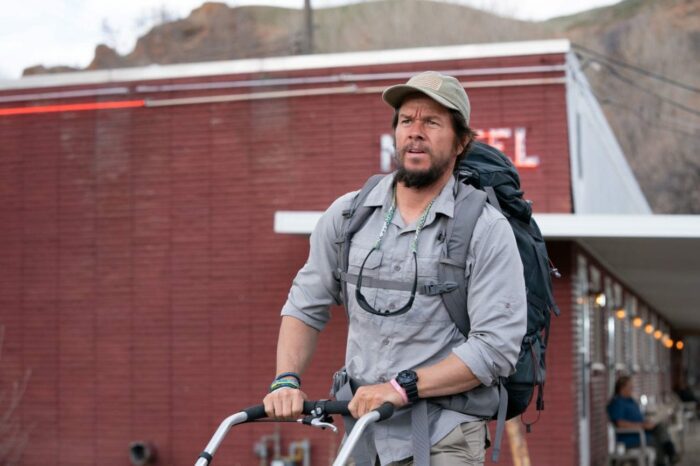 That said, it’s still a stolen spotlight. Joe Bell deserved to be a star-making performance for Reid Miller. His scenes immersed in pain and persecution are difficult, yet affecting in their empathy. It’s all too much about his father, even when those around Joe in the movie let him know that very fact. That late-breaking revelation evokes the rightful change and compounded tragedy observed in Joe Bell, but it is all insular and Green’s film cannot shake that slant. True attention was deserved for Jadin Bell more than the allegorical asides he and Reid fill.

Much of Joe Bell has the pungent trace of an unglamourous “glamour project” for Mark Wahlberg and likely a few of the film’s manly executive producer backers, including Jake Gyllenhaal, NFL Hall of Famer Derrick Brooks, and former NBA All-Star Michael Finley to name a few. Projecting for sure, this movie feels like a place where the A-lister is trying to put forth marketed atonement for his own past bigotry. When all this movie adds up to be about is him, the sincerity aligns to the wrong place.