The American Friend directed by Wim Wenders in 1977 is one of those films that, by creating special vibes, attracts the viewer to sit back and let the atmosphere of the film surround them, however dark it may be. Viewers like me will love it, but I feel that those who prefer to see more action in films could be disappointed. Based on Patricia Highsmith’s novel Ripley’s Game, Wim Wenders’ film is very different from the other adaptations of the Ripley series. What makes this film special is that it feels focused not on the actual storyline, but more on the inner worlds of the two main characters: Ripley and Zimmermann—their relationship, motives behind their actions and choices, and the atmosphere surrounding them. Jürgen Knieper’s score plays a big role in creating that atmosphere of darkness, suspense, and hopelessness.

In The American Friend, things are often revealed more by feeling than by dialogue or action. Characters’ living spaces, their emotional states, especially when they are alone, often speak more than they actually say out loud. The songs used to describe them—The Kinks’ songs for Zimmermann, and “Ballad of Easy Rider” or Bob Dylan’s “Pity the Poor Immigrant” for Ripley. 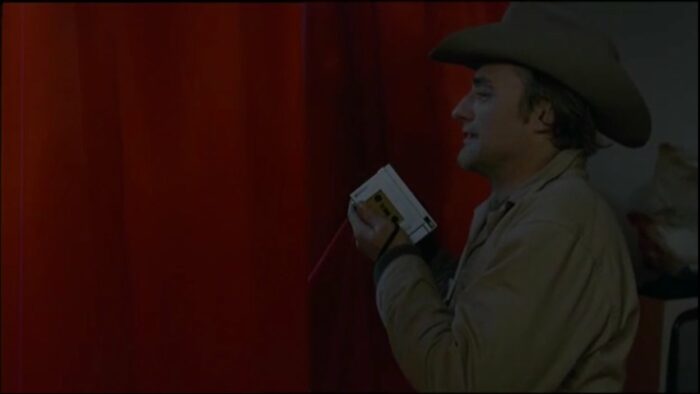 Dennis Hopper creates a version of Tom Ripley that is so different from its previous or later cinematic identities—Alain Delon in Purple Noon, or Matt Damon in The Talented Mr. Ripley. Ripley of The American Friend wears a cowboy hat everywhere including Hamburg, lives alone in a big, almost empty house, sleeps in a red bedroom in red silk bed sheets, and travels between New York and Hamburg for his art forgery business. He talks to his recorder and listens to the recordings later, takes selfies with his Polaroid camera as if the photos are taken by someone else. Empty inside, he seeks something to seize to keep going. Ripley is alone, and he’s confused. Leading his way of life, he gradually loses his sense of self. “I know less and less about who I am, or who anybody else is“, he records.

The main story of The American Friend begins when Ripley meets Jonathan Zimmermann, a frame maker living in Hamburg. Zimmermann’s character (played by Bruno Ganz) is somewhat opposite of Ripley. The two men live radically different lives: a sociopathic criminal involved in different suspicious affairs on the one hand, and a frame maker who lives a quiet life with his wife and a little son on the other. 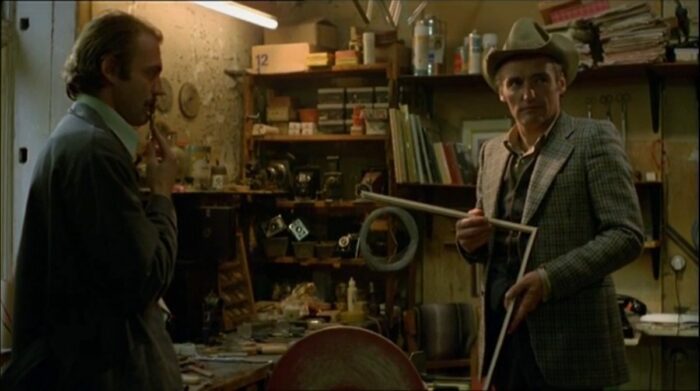 In one scene, Zimmermann invites Ripley in his workshop which Ripley characterizes as quiet and peaceful, just like Jonathan himself.

“I envy you. The smell of paint and wood. Must be good to work here. Then when you finish something, you can see what you’ve done.”

To which Jonathan replies: “It’s not that easy. Not that safe and easy.”

Introducing Zimmermann, Wenders makes him sing The Kinks song “Too Much on My Mind”. The song can be seen as a hint that not all is as quiet and simple in his life as it may seem on the outside. 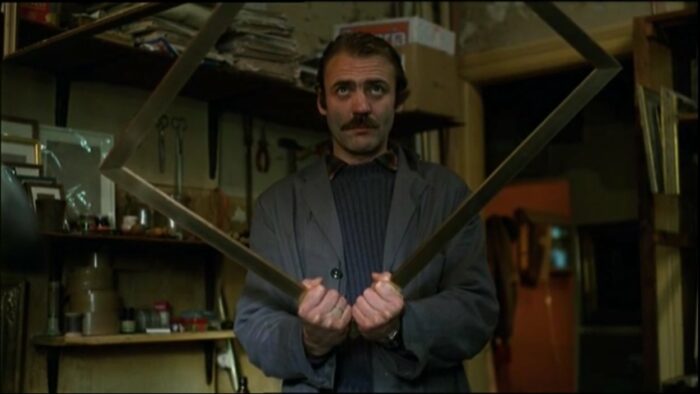 The meeting point of these two characters is the painting that Ripley brings from New York to sell at auction. In the first scene of the film, Ripley, who has just arrived in New York from Hamburg, visits Derwatt—the artist believed to be dead, who forges his own paintings. Ripley has sold one of his paintings and arrived to take another one to Hamburg. Nicholas Ray plays Derwatt; in fact, all the criminals in the film are played by directors and it was a deliberate choice by Wenders. Nicholas Ray, Samuel Fuller, Dennis Hopper, French director, and actor Gerard Blain, as well as three more directors who appear in more minor roles.

A little offscreen info here. I found it curious why Wenders chose to cast directors for those roles. The reasons Wenders gives in his comments to The American Friend are quite convincing to me. The first reason is that he is ‘unable to make people anything but sympathetic’, and I totally believe that based on his films that I have seen. Thus, casting directors as bad guys was ‘a saving idea.’ But I loved the second reason especially. He says: ‘As a director, you know a lot about the human soul and in a way, we do odd sorts of things that [we are just doing] in order to get the movie made, and I felt these directors were a perfect metaphor for all the bad guys in the film.‘

Anyway, Derwatt is quite a special character in the film. It starts and ends with Derwatt. He’s almost the point of origin to all that is happening. An interesting thing about Derwatt is that he’s neither dead nor alive, and is the first element in the film suggesting the value of the death—the art of dead painters makes more profit. Zimmermann goes even farther, he ends up making a profit from his own life. 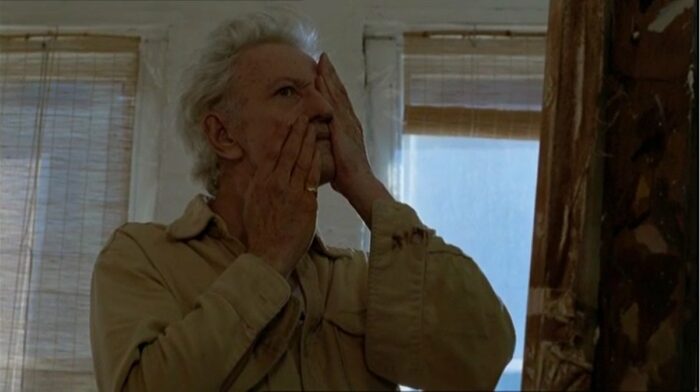 Derwatt’s work is not ready to sell until it is framed. Zimmermann does that part. He frames the picture for the auction where the two main characters meet. Ripley’s attention is caught by Zimmermann’s remark that this particular painting on sale is not as good as others, that Derwatt likely worked on it three days, that the blue is different—thus advising his art dealer friend not to pay too much for it. Zimmermann has a good eye, something Ripley knows the value of.

After the auction, the crucial moment happens, which determines all the later events of the film—Ripley is introduced to Zimmermann who ignores his hand extended for shaking, uttering “Yes, I’ve heard of you”. As Ripley later admits, that was enough for him to desire some kind of revenge. When Zimmermann leaves, as an excuse for his behavior, his weak spot is revealed—he has leukemia in remission, and of course, needs money.

Ripley uses this for his revenge and comes up with a plan. He suggests Zimmermann as a killer to his French criminal acquaintance, Raoul Minot (Gerard Blain). They send him a letter, seemingly from a friend, implying that his condition has worsened. Although it’s a lie at this point, Zimmermann begins to worry about his health.

One of my favorite sequences of The American Friend is when Minot approaches Zimmerman at the doorway to his shop. The first shot shows the two men from the inside of the shop, in two separate frames in the door. Then they are shown from the street and suddenly we are on a train with them. They are standing in the same or similar poses like they were transported into a new environment. They are on some twisted journey together. 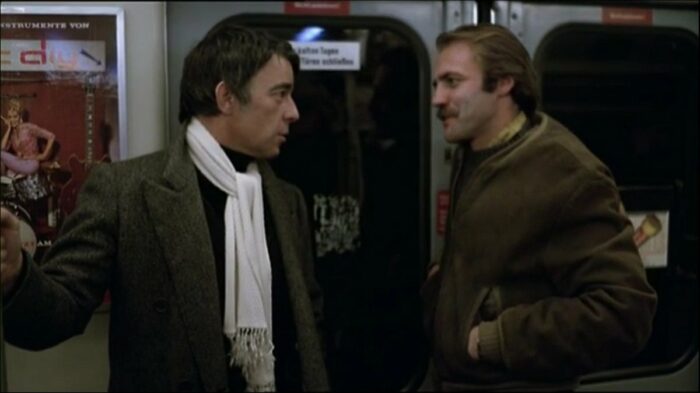 Here Minot offers Jonathan money in exchange for killing a man or two. It sounds like this strange man has more information about his health then Zimmermann himself. At first, Zimmerman rejects the offer—he’s not a killer. He gets off the still-moving train, runs down the stairs, then through a tunnel to the doctor’s office. His road to ‘Hell’ has started. Zimmermann needs to be sure that his illness didn’t get worse. The doctor says it’s unlikely, though nobody can guarantee anything. The only thing Zimmermann can do is to wait for the test results. His uncertainty is only favorable for Minot who, after the stages of manipulation, finally gets what he wants—Zimmermann agrees to kill a man for him. So, it turns out that Ripley didn’t miss, he chose the right man.

Eventually, Ripley starts to like Zimmermann—though after the latter killed the man, which means after Ripley got his revenge. He even starts helping Zimmermann when realizes that Minot isn’t going to stop there and demands another killing. Ripley helps to kill the second victim (this time on a train to Munich), and also reveals that it was his idea in the first place to lure Zimmermann in this criminal plan. 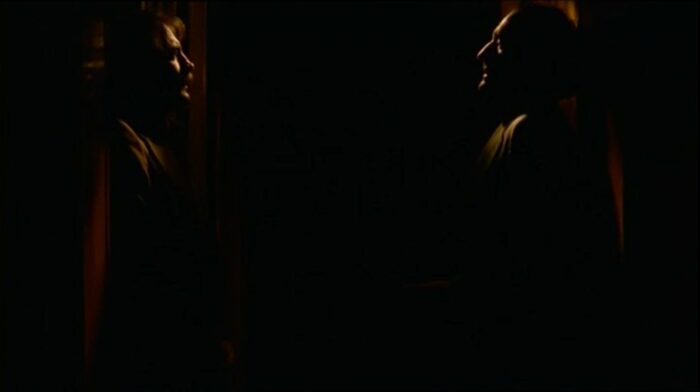 But why does Zimmermann agree to kill? How can a good person, loving husband and father agree to that? The most reasonable answer would be to get the money that he can leave to his wife and son. Death is hanging over him and the only thing he can do is to wait and be beside his son as long as possible, and do as much for him as possible.

But as I see it, killing also helps him to feel alive, and in control. It gives him an illusion of going beyond the frame that contains his life, and the frame that imminent death has put around him. Zimmermann chose to get on the roller coaster that Ripley crafted for him, to take risks that he wouldn’t take if his life weren’t ending. In the end, he leaves Ripley ‘frames’ and goes beyond the frames himself.

Magda is a cinephile living in Tbilisi, Georgia. She runs her Facebook group dedicated to cinema. Adores Twin Peaks and David Lynch. She is also known for loving strange films that no one has seen except her and the directors themselves, at least some of her friends think so. Her other passion is music, especially classical, and also loved to attend Latin dance fiestas in the time before the pandemic. 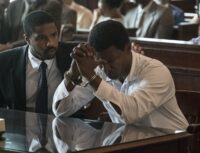