Musical movies are one of those genres that mostly escape mainstream audiences. Unless the movie is animated (or a remake of an animated movie), à la Frozen or The Lion King, most movie musicals tend to go by the wayside for most viewers. As a matter of fact, of the top ten highest-grossing movie musicals of all time, eight of them are animated (or remakes)! Of the ones that are live-action, the first is Bohemian Rhapsody (which isn’t a musical in the traditional sense), and the other is Mamma Mia, coming in at 10th place. So what is one to do when musicals just aren’t really in the mainstream? Look no farther than movie #17, La La Land.

La La Land is a wonderful movie musical that is not hard to understand and does not require the audience to have any prior knowledge of musicals. This is important because quite frankly the genre can be a little daunting at times to the average viewer. Musical greats like Moulin Rouge!, Chicago, Grease, and Cabaret are all rightfully masterpieces in their genre, but they are all hidden from the common eye for one reason or another. On the other hand, La La Land stormed onto the screen and gave audiences something they had not seen before: a musical that is both accessible, and absolutely fantastic in its own right.

The film is often called a “love letter to the old days of Hollywood,” and let me explain why. The plot of the movie is about aspiring actress Mia Dolan (played by Emma Stone) and struggling jazz pianist Sebastian Wilder (played by Ryan Gosling). These two are leading similar lives towards very different dreams, yet they somehow get involved with one another after chance meetings at a few different places around Los Angeles. Over the course of the film, Mia and Sebastion fall in love and learn about each other’s passions. Sebastian’s dream is to open his own jazz bar in order to revive the dying art form. Meanwhile, Mia wants to become a big actress, something she has worked her whole life for but has never had any luck. 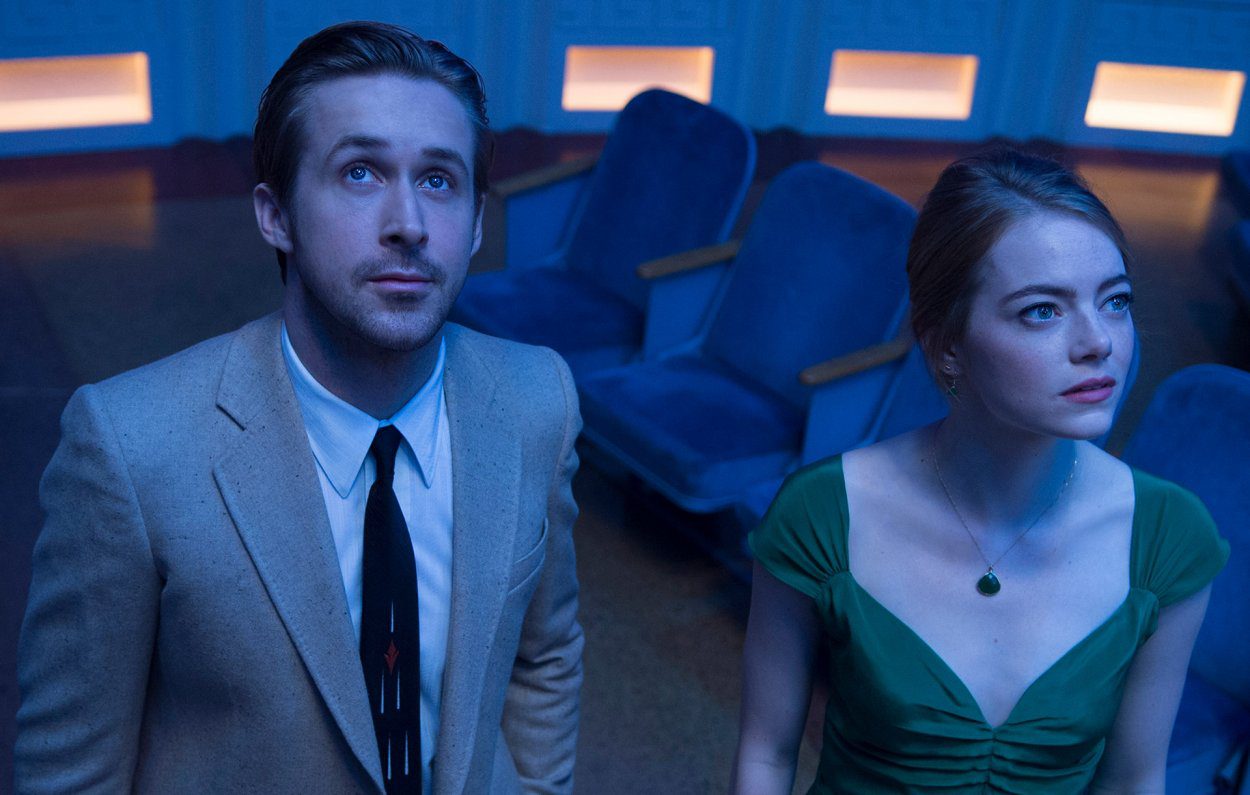 Eventually, Sebastian is convinced that he can’t just sit around and wait for a jazz bar to fall in his lap; he needs to do something with his life. He is approached by an old college buddy to join his band, and he accepts. While he is playing piano on a big stage, it is not truly the music he loves. Mia points this out to him, and while he does not admit it, he knows it. At the same time, after going through numerous auditions and not getting any roles, Mia decides to put on a one-woman show to show offer acting skills in a last-ditch effort to impress people around town. Through some miracle, Mia gets an audition due to her show, but not after she and Sebastian have a major falling out over their respective career trajectories.

While this may seem like your typical love story on paper, it is much much more than that. For starters, this is a very human love story. More often than not, love stories are all about chance encounters, people from broken homes, star-crossed lovers and everything always seeming to work out in the end. In the case of La La Land, director Damien Chazelle constructs a story that feels strangely relatable. He is able to convey to viewers feelings that are easy to grab on to, without having to suspend any form of belief. By having a plot as accessible as this, the movie is immediately set up for success. Audiences did not go into La La Land with question marks, they went with big expectations. Granted, that’s also in large part to the music.

Before I get to that though, I need to touch on how glorious Damian Chazelle actually made this movie. Throughout the film, there are so many little hard-to-miss instances of brilliance that go unseen but are still appreciated. Chazelle has such a way with shot selection, framing, blocking, and color, it is almost mind-boggling how well it is done. On so many different occasions, color is used to evoke a certain emotion, and the audience has no idea what is going on. But besides that, the actual shots he uses are just incredible. Long, one-take tracking shots, whip pans, and slow fades, it all is just an explosion of creativity. For most, many of the moments will go unnoticed, but your subconscious will still be thankful; it is an aesthetic joy to watch. 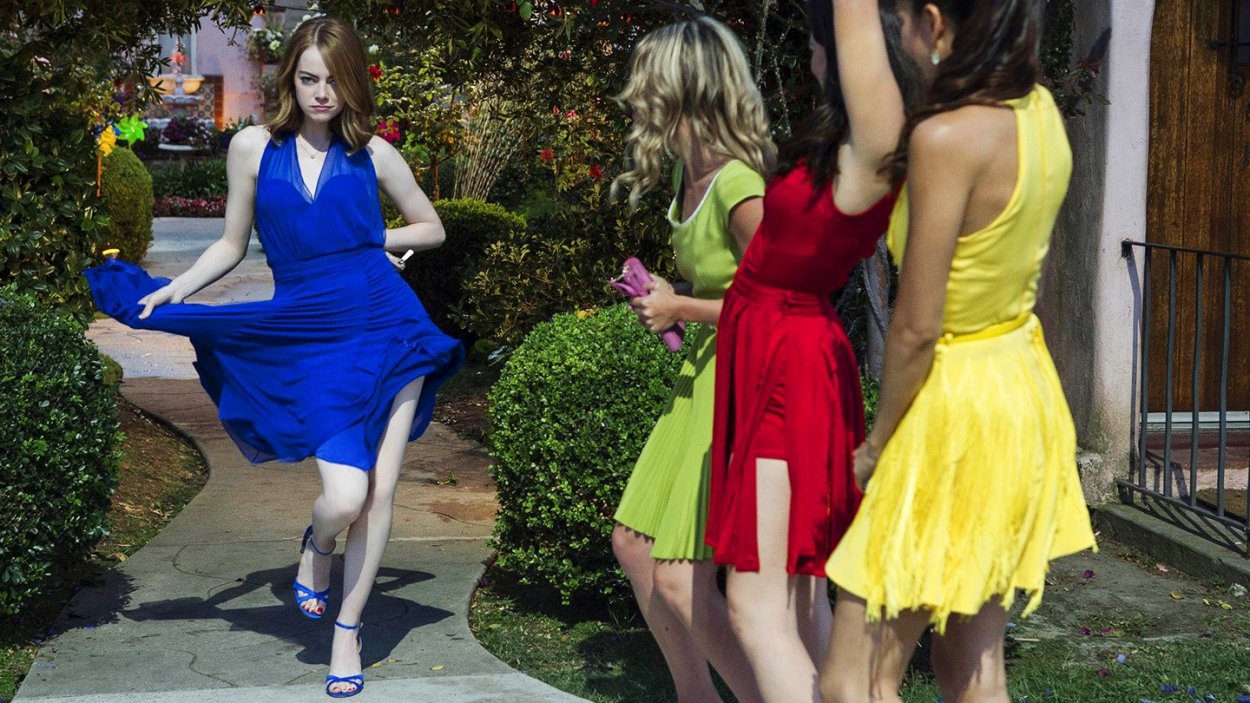 Yes, the music. How have I not mentioned the music in a musical this far into an article? Well, fear not. La La Land has absolutely fantastic music. Yes, nearly every movie musical has wonderful music, but I am here to tell you that La La Land truly did give audiences something special. Remember how I said this movie is a “love letter to the old days of Hollywood”? This sentiment truly comes out in the music. Throughout the entire film, the themes and motifs give off an extremely wistful vibe. More specifically, the movie harkens back to a different time and era.

Throughout various plot moments and different musical numbers, Damien Chazelle is showing off his directorial chops by incorporating things that feel just like the days of old. Musical numbers such as “Another Day of Sun” and “A Lovely Night” are scenes that very well could have come right out of the golden age of Hollywood. They include big sweeping sets, music set to tap dancing, and big choreographed numbers that are absolutely spectacular. The singers and dancers all handle themselves that really add to that wistful feeling of the olden days, but they also keep the music grounded in the modern era, and it is absolutely incredible to see.

However, not every musical number is a deep dive into days past. Other musical moments like “Someone in the Crowd” and “Audition” absolutely take the movie into a whole new direction, with something creative, innovative and different from the wistful tone that other songs show. One is a big sweeping musical number with an entirely different style of choreography, but also has long tracking shots and tone and tempo changes throughout the song, giving the viewer a whole meal in one entire song. The other is an intimate look into the main character Mia Dolan, but also with added Damien Chazelle flair. Emma Stone sings her heart out while the camera circles around her in extreme close up, showing the viewers an entire range of emotions throughout one song, and it is really something to behold.

The movie has songs that call back to a different time, and show us visions of what the future of movie musicals might be like. That being said, La La Land also runs the whole musical gamut and gives us a little bit of everything. “Start A Fire” is a big band piece from Sebastian’s touring days, “Planetarium” is a sweeping orchestral piece that is paired with an abstract but also sweet moment for the main characters, and “City Of Stars” is the Oscar-winning, touching duet that marks a major turning point in the film. La La Land gives viewers a taste of many different musical styles throughout the film. Not styles like rap music to rock music, but more so the different ways that movie musicals sing to their audiences.

The last thing that La La Land does wonderfully in terms of music is its overall theme. While other musicals definitely have an underlying piece of music that bookends or otherwise surrounds the film, I would argue that not many do it as well as La La Land does. Throughout many of the songs, if not every single one, you can hear bits and pieces of the same note and chord progression that head composer Justin Hurwitz wrote for the film. It’s so intertwined with the film, it is really felt in so many moments. At the same time, the progression is not at all overpowering or overplayed. Viewers can tell that it is the theme of the movie, and how it is played differently helps move along the plot. It is something Hurwitz and Chazelle do masterfully, and I have not seen it done to such an extent anywhere else.

Without giving away any more of the plot, it is easy to see why this musical is as special as it is. The plot is more than meets the eye, the music is a rollercoaster ride from start to finish, and audiences leave the theater feeling not just satisfied, but overjoyed at the performances they just saw. Emma Stone and Ryan Gosling really knock it out of the park as well here. While neither of them is a classicly trained Broadway singer, they are professionals, and they put on an epic show. Every single piece of this puzzle I have discussed makes this movie so accessible for any viewer. With it all done so extremely well, two hours absolutely fly by. And if you are anything like me, you will be singing the songs every few days or weeks for the foreseeable future.