If I was 13 years old upon its release, 21 Bridges might have become my favorite film of all time. I don’t necessarily mean this as a slight. Some of my favorite memories of watching movies as a young man in the ’90s was staying up very late on a Saturday night, putting on HBO, and watching action-thrillers that satisfied my very simple needs. A lot of the time that need was boobs, sure, but it was also having a charismatic lead surrounded by great character actors with lots of the boom boom.

21 Bridges, the newest starring vehicle for Black Panther superstar Chadwick Boseman, is my childhood made flesh. With the exception of a flash drive here or a cell-phone there, you could have told me the film was made in 1996 and I wouldn’t have blinked. It is a blue-collar suspense thriller with a no-frills approach to its action and an A-B-C narrative that is predictable in that “comfort food” kind of way. Think of it as Law and Order with more blood and F-words. 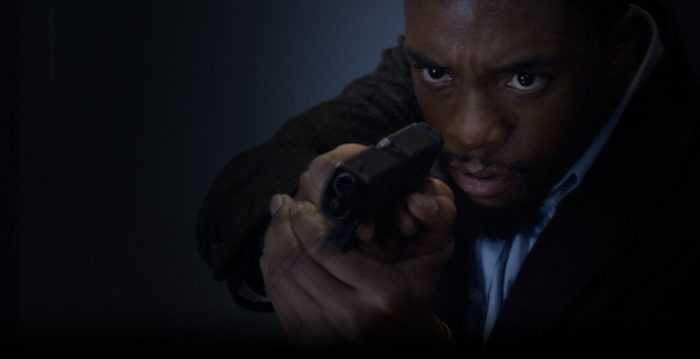 Andre Davis (Chadwick Boseman) is a New York detective not afraid to fire his gun. He’s built his reputation as a moral, but violent, pursuer of justice. Internal Affairs has cleared him of every case in which a perpetrator of a crime was killed but many in the force are wary of his trigger finger. Davis’ sense of justice was formed early as his father, also a cop, was killed by three men when he was just 13.

Despite his polarizing reputation amongst the “blue”, Davis is the obvious choice to investigate and track down two men who, after lifting an unexpectedly large load of cocaine from a criminal organization, kill eight NYPD officers who responded to the scene. Davis teams up with Narcotics detective Frankie Burns (Sienna Miller) and is given five hours by the FBI to find the perps before they take over the case.

With assistance from the 85th precinct’s Captain McKenna (J.K. Simmons), Davis determines the shooters, an intelligent but lost individual named Trujillo (Stephan James) and a ruthless military-trained assassin named Ray (Taylor Kitsch), are still in Manhattan so he closes the 21 bridges that could provide escape to the criminals as well as looping all the subway trains, grounding all planes, and blocking exits by river. With Trujillo and Ray boxed in on the island, Davis must pursue justice despite every cop on the island’s desire to execute the cop killers on sight. 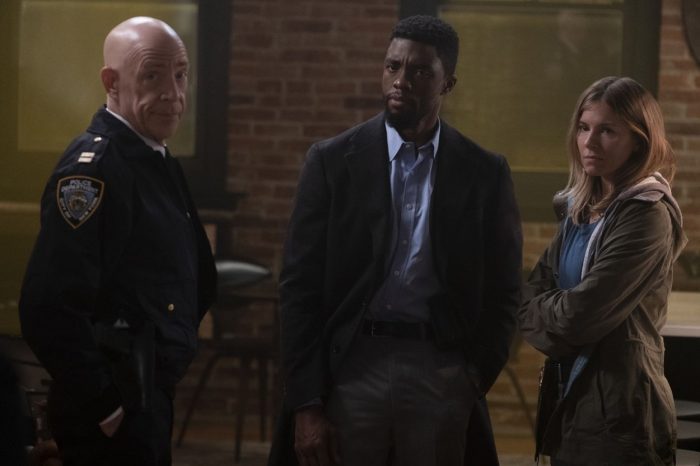 This is a fun leading man job for Chadwick Boseman, a fantastic actor who cut his teeth in mostly biographical dramas (42, Get On Up, Marshall) before becoming an international superstar as T’Challa in the Marvel Cinematic Universe. 21 Bridges gives him the opportunity to cut loose and not be burdened with impactful drama. It is nice to see him just running around as a chaotic good “avenger” (yes, the film can’t help but allude to this term) going after bad guys.

Sadly, despite his star power and ability to lift the material, 21 Bridges will likely not be a success. For one, Frozen II and A Beautiful Day In the Neighborhood are opening the same weekend and have a more momentous spin around them. And frankly, 21 Bridges is not a unique enough or challenging feature to compete with those or many others on any given weekend, let alone this one. As stated before, this is a ’90s throwback and that was, well, decades ago. There is a reason that kind of film died.

I’m not complaining. The film only cost $33 million to make and director Brian Kirk, who makes his directorial debut here, is industrious and simple with his shot selection and approach. With the exception of a wonderfully shot climax inside a subway train, the movie doesn’t try to impress with flashy cinematography. It lets the character of New York City, and Boseman’s charisma, carry the day. For those complaining there are no moderately budgeted films these days, 21 Bridges will be used as the argument against that: simple, cheap, and effective filmmaking released nationwide.

Even at a healthy 99 minutes, maybe nine minutes more than a film of this type needs, 21 Bridges feels cut-up. Keith David appears as who looks to be a close advisor to Boseman’s Davis but, after the first five minutes, disappears completely from the film. The trailers have shown entire sequences not seen in the final product and some of the film’s twists and plot contrivances feel rushed, as if there was a scene of exposition missing.

Suffering considerably from this potential hacking of the story is Kitsch, who looks to have substantial backstory removed for the sake of brevity, and a super-cool “cleaner” character, played expertly by Star Trek veteran Alexander Siddig,  who is reduced to mere minutes of screentime that, due to his build-up, seems unexplainably abbreviated. I won’t be surprised if this film gets an “Unrated Director’s Cut” once the home media options open up. 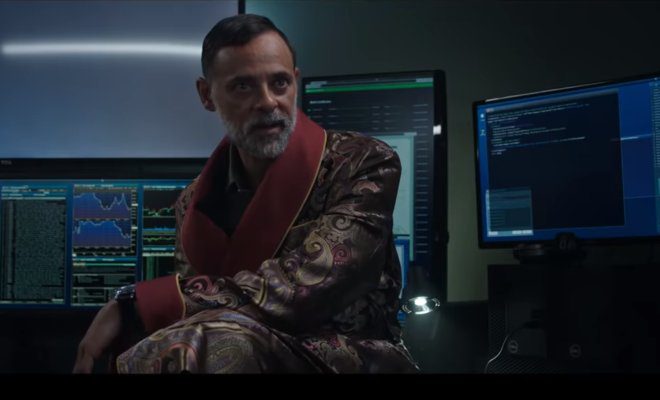 Overall, 21 Bridges is a good alternative recommendation to the tentpole/award fodder that opens this weekend and carries over from the previous one. And if you don’t catch it in theaters then there might be no better time to watch this than on a lonely and late Saturday night. Being a teenager is optional.

21 Bridges opens nationwide in the US on November 22nd.