When Byung-gil Jung’s The Villainess opens pre-credits with the camera perspective set to that of a first-person-shooter-style video game the audience gets to take on the guise of whatever character we are tracking through the dingy urban setting. Through whizzing kicks, punches, spins, leaps, slashes, flips, and empty clips, we don’t know who or what we are but we’re buckled down for whatever flies into our view. When the camera detaches to draw back and reveal and solo young woman tearing these rooms of and hallways of men to pieces, you cannot help but be taken aback.

This opening number makes the single-take climax fight with Charlize Theron in Atomic Blonde from the same 2017 look like a box waltz lesson from an elementary school gym class. The woman is the reckless assassin Sook-hee, played by Ok-bin Kim of Thirst, and the scene ends with a hint of a deranged smile of glee. The Villainess spins with the dynamic energy of wanton mayhem and operatic displays of graphic violence when the talking stops and confrontations begin. 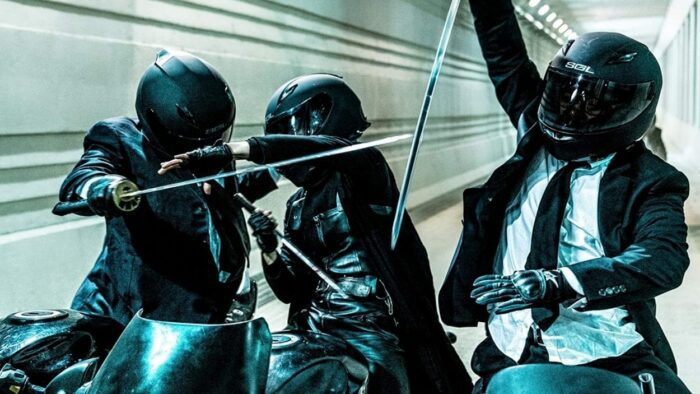 There are times foreign cinema does action better than the states. This is one of those places. The Villainess is a toast to Korean film that has become en vogue since Parasite‘s historic Oscar win. This actioner is available to stream on Hulu Plus subscriptions or on the Hoopla Digital platform using a good old fashioned library card.

Upon being apprehended, Sook-hee is sent to a locked-down training center collecting and reforming wayward women with violent tendencies. The facility is run by Chief Won (Seo-hyeong Kim of Late Spring) with the twisted slant to train these women to apply their talents in other crafts like theater or cooking at the same time as honing them to become deadlier killers than they already are. Much of Sook-hee’s time inside is spent piecing together the splintered memories of her sordid past. She is promised freedom after ten years of service.

If you locked any of us up long enough with constant programming and isolated focus centered on one or two skills, our minds would align to those tasks. We are creatures of habit after all. With enough education, you can train someone to do most anything. If the two habits you gave someone are killing people and baking cookies for years on end, you best believe both the death and the dessert would be tip-top to the point of being automatic.

Reintegrated into society years later with a baby daughter in tow, Sook-hee retains her sleeper agent murderer-for-hire status among fellow female stablemate rivals from the program. However, her heart softens thanks to a blossoming romance with a single neighbor named Joong-sang (Ha-Kyun Shin, Kim’s co-star from Thirst). Unbeknownst to Sook-hee, Joong-sang is a watchdog assigned by Chief Won that has been keeping adoring tabs on her for years.

As aforementioned, the set pieces and action sequences of The Villainess are absolutely breathless. The fight choreography, long takes, and stylish trickery captured by the camera of first-time feature cinematographer Jung-hun Park amplify the intimate and splattered intensity of every scene. The sharpness and shot variety are off-the-charts in finding new and creative ways to dispatch blood bath punishment. When this film is kicking, it kicks, earning high marks for technical prowess.

Programming or no programming, the flight-or-fight instinct cannot be entirely removed from our nature, neither can a violent past. There is a strong level of “once a killer, always a killer” in The Villainess. Finding love, becoming a parent, or acclimating to a normal domesticated life can tame and mask that instinct from the forefront of a killer, but the capacity to kill and the consequences of those actions never goes away. There’s no complete off-switch for that trigger, only different strengths of humane circuit breakers.

To say the incongruity in the film comes from the non-action moments instead of the kinetic ones is quite the anomaly. Normally in films of this genre, the action is the headache and the stillness is the salve. Flip it here. The Villainess is missing clear substance to go with all of this style.  The central melodrama of memory and the hammy love story, woven with flashbacks and longing moments of disjointed reflection, border on weakness and ridiculousness, which is wild considering the berserk opposite side of the cinematic coin.