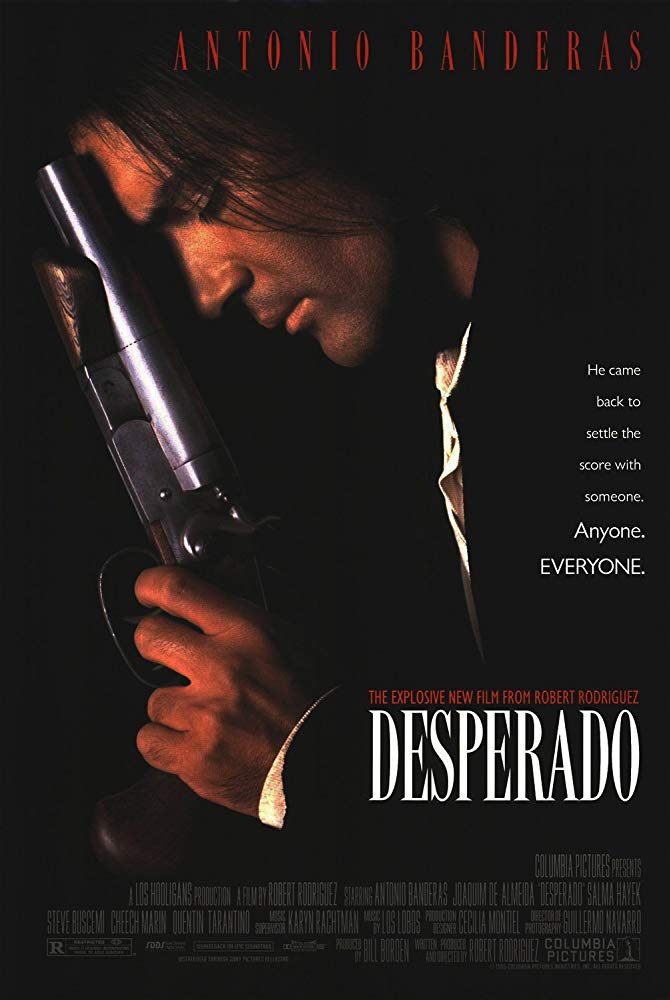 An overused knock laid against far too many movies is calling it “style over substance.” Add it to the list of film critic cliches that probably shouldn’t be used anymore. Sure, a flashy exterior will always look cooler and more attractive than the studs of the framework underneath. However, a better way to think about it is that an exciting film cannot hold a large amount of style without ample substance as the rich and sturdy base. Take the traits as being symbiotic and not disconnected. Robert Rodriguez’s cult classic Desperado, which turns 25 this year, couldn’t be a better union of style and substance for its intended aim.

To define it simply, the style of Desperado is that of a shoot-’em-up movie, and the substance is that of a myth played straight. With kinetic coolness and ferocious passion, the film sweats bullets, blood, and bravado through every pore of its voluptuous cinematic body. This remains as glorious a romp to watch now as it did then while standing as an exemplary throwback to practical effects, dynamite stunt work, and economical filmmaking.

Desperado stands as an amplified leap from and sequel to Rodriguez’s DIY breakout El Mariachi with a new, gritty gauntlet of revenge. An arid urban legend of a musician who carries a guitar case full of gunpowder-spewing justice is being spread by a bandana-ed bardic scout (Steve Buscemi, essentially playing himself). Every detail about the massacre left in this man’s wake is deadly and monstrous, striking fear into the barflies who hear Buscemi’s thick tall tale. This Mexican menace is coming, and the man he is looking for is named Bucho. 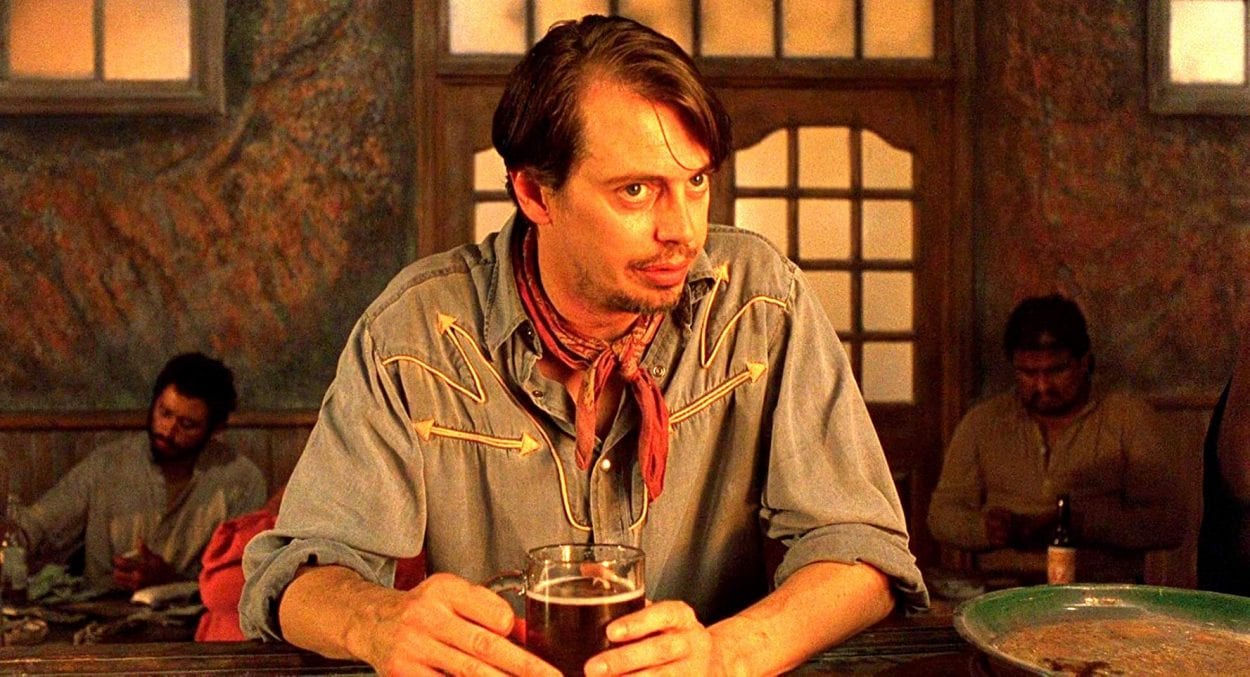 The unnamed specter and title character in question is played by the top-billed Antonio Banderas in his first action role. His soulful reserve of chivalrous regret is matched by a penchant for pistolero theatrics. Bucho (professional villain Joaquim de Alameda, dripping with acrimony and replacing Raul Julia, who would pass away from illness shortly after) he seeks is a local crimelord with his intimidating control and cash laced everywhere. When Bucho feels the treble-clef crosshairs on him, new protection is brought in, and everyone is on high alert, leaving our hero as one man seemingly against everyone. The marauding mariachi’s only allies become his storytelling mouthpiece, a pair of old bandmates on call with extra weaponry, and a fetching local business owner named Carolina (the Hollywood arrival of Salma Hayek) who aims for his heart. 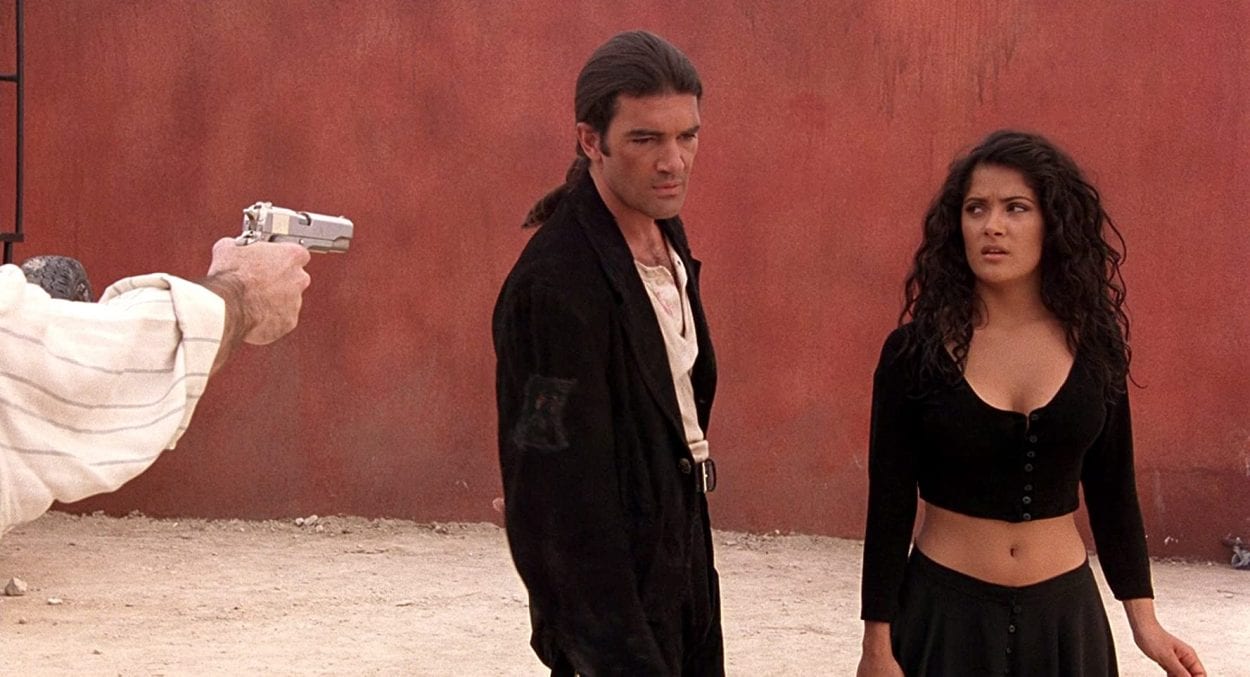 Desperado, in this writer’s opinion, is Robert Rodriguez distilled to the tightest and best work of his career. He certainly went on to grander and larger projects like the Sin City and Spy Kids series and has always pushed the creative limits of filmmaking ahead of his contemporaries. Rodriguez will always be a maverick legend for his cutting-edge work. Yet it is the perfectly pitched leanness of Desperado that showcases his talents best as a writer, editor, and director. 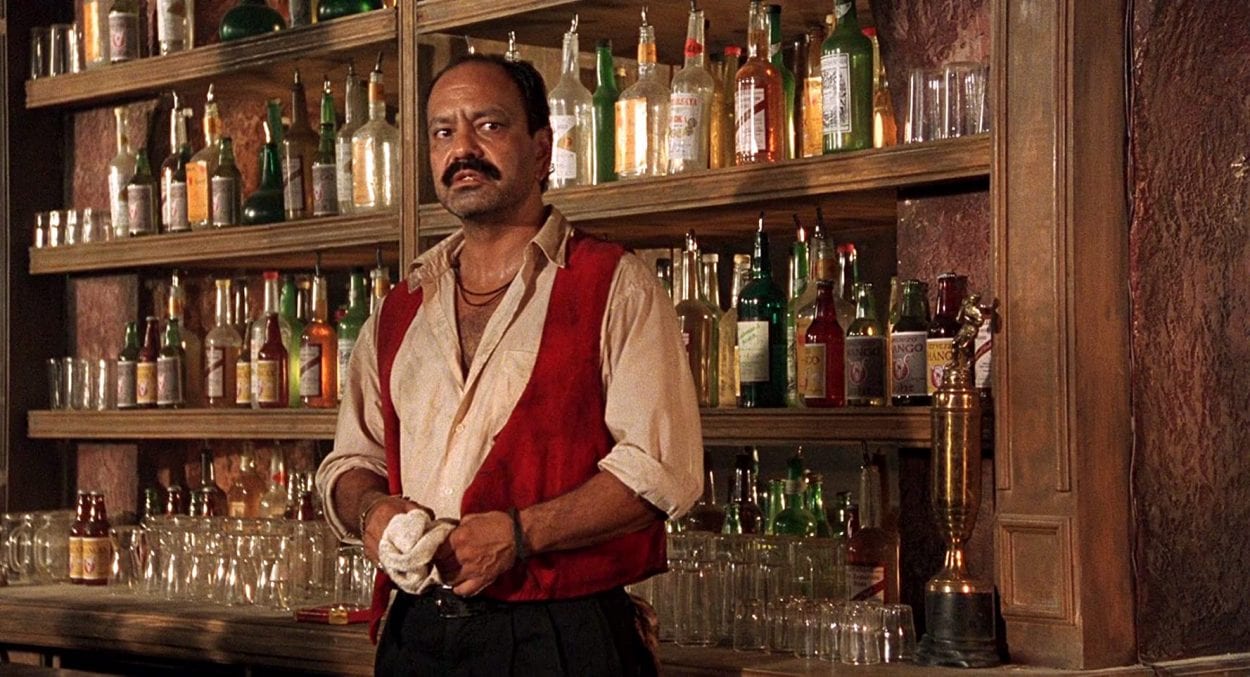 The wealth of punchy dialogue and rich characters in Desperado might seem spare and stock on the outside, but the personal touches from Rodriguez and his tight-knit crew of collaborators in front of and behind the camera provide zest that is never plain. From Danny Trejo’s mute, knife-twirling assassin and the dancing toothpick in Cheech Marin’s bartender’s grill to Banderas doing his own singing and guitar-playing, there are flourishes both quiet and loud everywhere that are never, ever boring. By the time Quentin Tarantino’s legendary cameo comes around, we still haven’t made it to the full icing on any of this cake. The writing and stakes keep elevating with gradual immersion and excitement uncommon to the frenetic blockbusters of now. 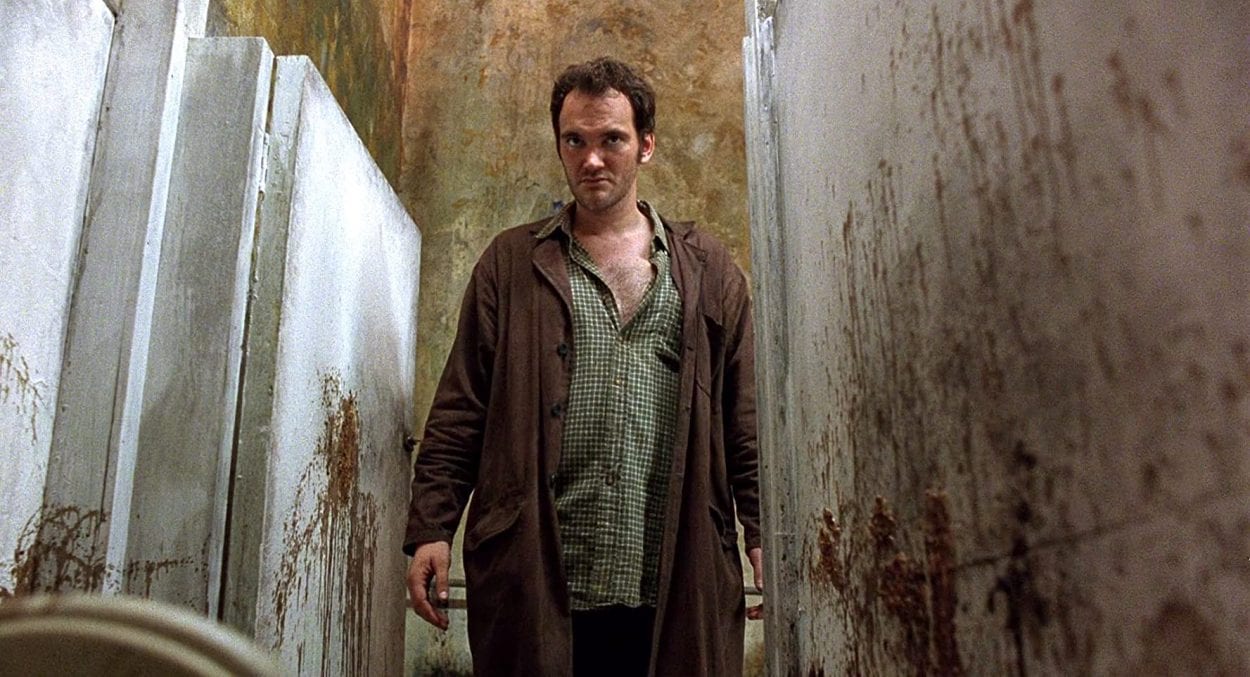 Rodriguez has always been a stellar cinematographer and editor, and it shows in Desperado. There is a deliberate pace studded with stunning set pieces and dramatic asides that play like a balanced string of 10-minute short-film portions. The man is a genius with camera shots, and he learned Steadicam on his own just to make this movie look fancier than it actually was. The goal may have been a wink at John Woo, but Rodriguez has a flow all his own. Shooting out of sequence and editing as he goes has always been his keen way of covering screwups with pretend polish.

As is always the case with Robert Rodriguez, his films are a clinic of shoestring production-value success. He shot his own second unit (the “fun stuff,” as he calls it on the DVD commentary), kept 80% of the buddy-made temp music in the actual soundtrack, employed locals instead of shipping expensive pros from north of the border, and even had Banderas direct and cover a scene. The paltry $7 million budget of Desperado is 1,000 times the $7,000-and-change he used to make El Mariachi. The filmmaker squeezed every penny out of a 39-day sprint of a shoot to make $7 million look like $50 million. The results speak for themselves and put plenty of the action flicks of today to shame with budgets 200-fold greater than that of Desperado. 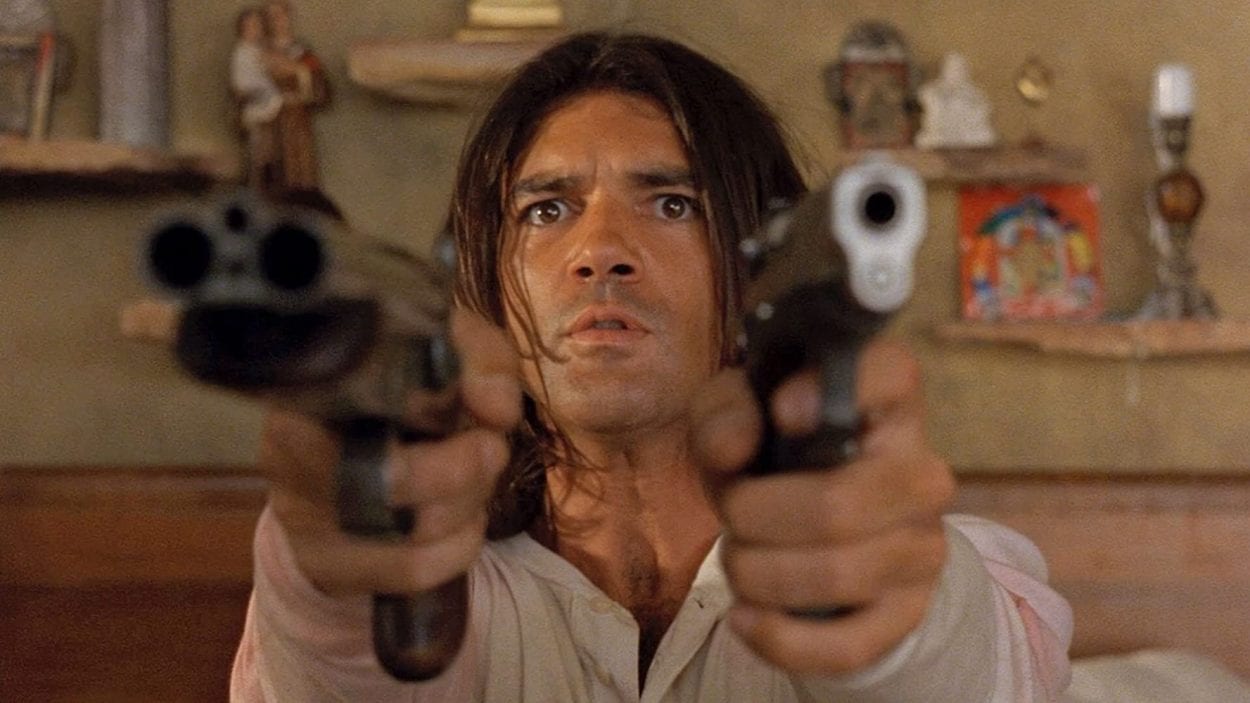 What keeps people coming back to Desperado is the cool factor of it all filling every corner, crease, and crack. So many traits about it are downright sexy. The music from the likes of Los Lobos, Tito and Tarantula, and an assortment of no-name acts is as seductive as it is supersonic for the fury on screen. The international smolder of Banderas and the discovery of Salma Hayek, then the first Mexican female lead in a studio film in decades, could melt the all the hot lead that tallied a 67-person body count and more. Lips sear, and lines crackle. Bullets whiz, and we sweat and swoon with everyone else. Damn, this movie never gets old.