Welcome to my column dedicated to the appreciation of physical media supplements called: Feature Presentations. The goal of this column is not to say whether a film is good or bad and worth picking up or not—I would like to highlight the discs that go the extra mile and provide film fans with enough tasty tidbits to satisfy even the hungriest of cinephiles. With all that out of the way, today’s article will focus on Extreme Prejudice from Vestron Video. 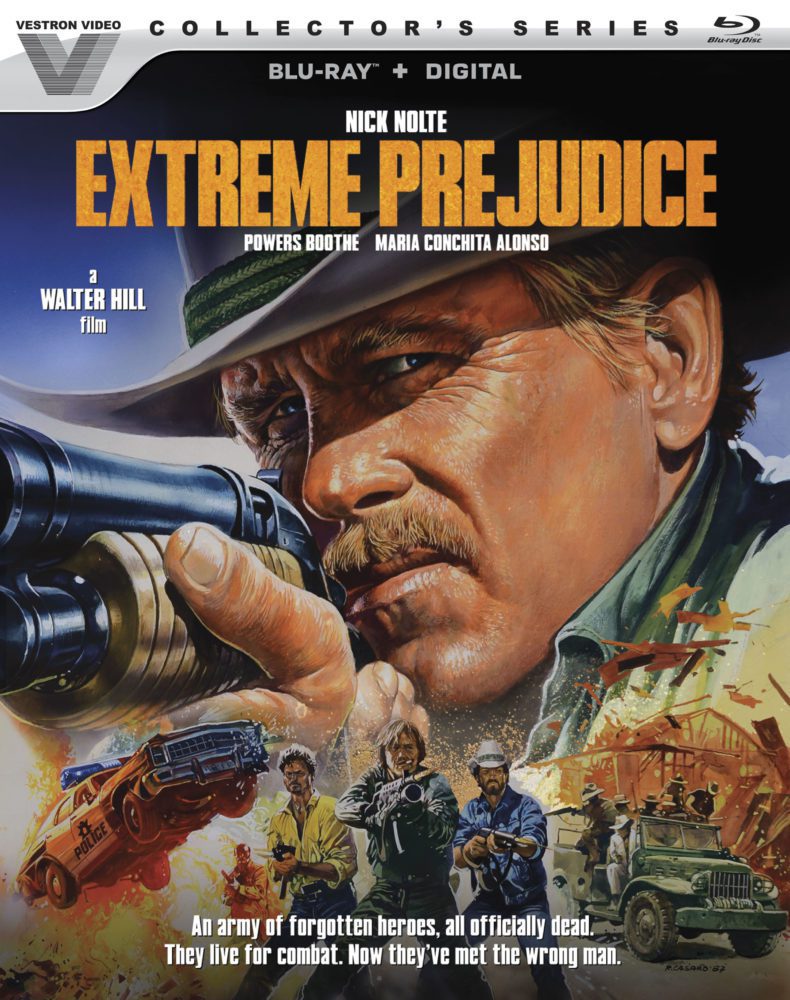 I’m a man of contradictions. As a child of the ’80s, Walter Hill was a director that spoke to my sensibilities. I recall 48 Hrs and Red Heat playing multiple times throughout my childhood. The mix of grittiness and tough-guy swagger oozes from every frame of Walter Hill’s best films. He fills every film with tough characters in tough situations that only violence can resolve. According to the director himself, every movie in his filmography is a Western. In my opinion, Walter Hill planted a flag and claimed ownership of films that feature bad guys and even worse heroes. Suffice to say, Walter Hill’s films left their mark on me.

When Vestron Video announced that 1987’s neo-Western Extreme Prejudice was getting a lavish Blu-ray, I raised an eyebrow. Not for the reason you might expect, though.

As is usually the case on upcoming announcements, I looked into this further as the name did not ring a bell. A Walter Hill Western starring Nick Nolte from a story by John Milius—why did this film not register? Had it bypassed me? There was only one way to find out!

Making my way down to my local brick-and-mortar store, I found the only copy of Extreme Prejudice in stock. I immediately snagged it and brought it home. That night I popped the disc in, wondering if Extreme Prejudice had escaped my radar over all of these years. During the course of checking out the Blu-ray, faint memories of this film returned. I recalled certain aspects, a shootout with Nolte and Rip Torn, Powers Boothe’s stylish outfit, and the final showdown. As the credits rolled, I was sure I had seen Extreme Prejudice in the past, but this rewatch, for the most part, popped my cherry.

After checking out Vestron’s Blu-ray release, I came away conflicted: the movie is a good time, but I’m not sure why it didn’t stick with me. Even some of Hill’s lesser films: like Red Heat and Last Man Standing, had more staying power in my mind than this film. Extreme Prejudice is better than those movies but doesn’t stand out as much. It’s a question I’ll continue to grapple with personally, but it’s a good movie and one that any action fan should own.

Diving into the disc’s features, Vestron Video included a feature-length audio commentary with film historians C. Courtney Joyner and Henry Parke. Anyone who has heard C. Courtney Joyner speak on a commentary track knows they will get their money’s worth. And this one is no exception. Parke, and especially Joyner, did their research beforehand as they discuss every aspect of the film’s production. Key points include John Milius‘s initial script, deleted scenes, and the casting choices. If you’re a fan of Extreme Prejudice, this commentary will satisfy you.

The next feature is an isolated score track with an audio interview woven throughout with music historian John Takis. Takis wrote the liner notes for the 2021 release of the Extreme Prejudice soundtrack. Takis talks about composer Jerry Goldsmith’s beginnings, how he came to work on Extreme Prejudice, and specific and unused musical cues peppered throughout the soundtrack. Takis makes for a scholarly listen and does a solid job of mixing the history of the film’s production while working to assist with explaining Goldsmith’s work on Extreme Prejudice. 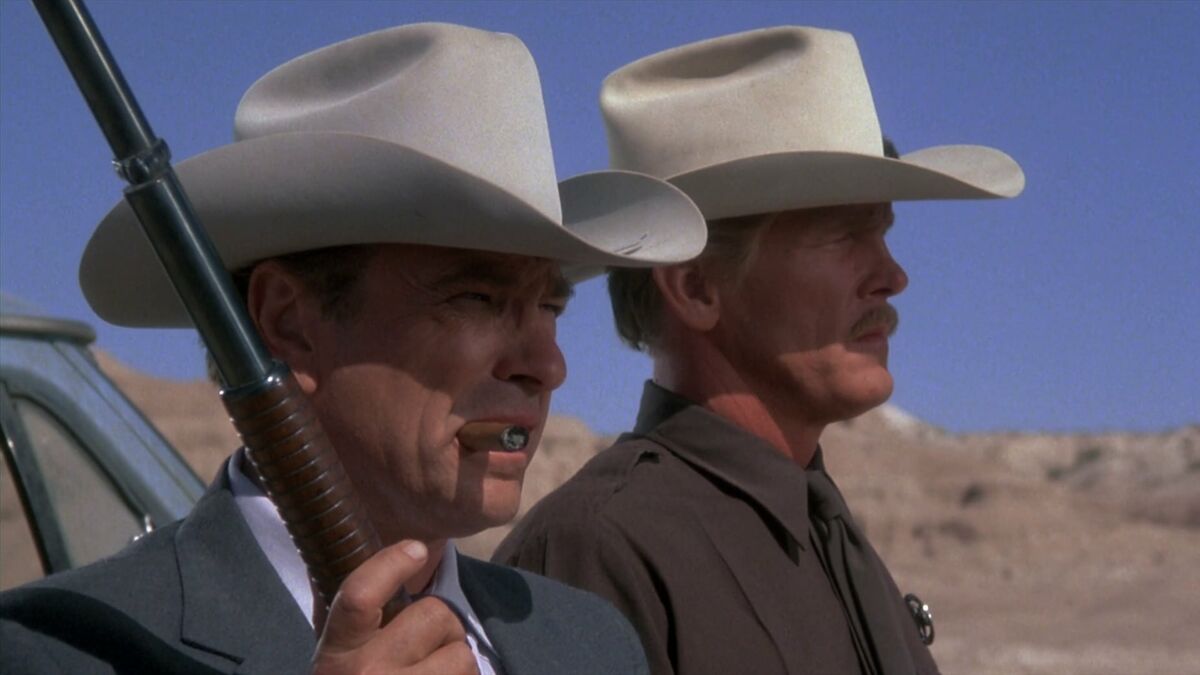 We next move on to a handful of interviews that Vestron Video has included on the disc. Director Walter Hill sits down to chat about the history of filmmaking through his experience making Extreme Prejudice. Listening to Walter Hill’s talk was an interview I want to have more on other releases. What makes this interview so good? For the first 30 minutes, Hill discusses his work with Sam Peckinpah and Steve McQueen while also offering his opinions on how film has changed from the early ’60s onward and thoughts on what film school offers filmmakers.

About halfway through the interview, the first mentions of Extreme Prejudice come up. Hill is honest about the production. He praises the actors, talks about what he liked and disliked about John Milius’s script, and his thoughts on the final product. Even after Hill begins detailing behind the scenes on Extreme Prejudice, the topics consistently switch to other areas of Hollywood with stories and opinions from Hill. I cannot stress how much I enjoyed this hour-long sit-down. Walter Hill’s interview is a must-listen, not just for fans of Extreme Prejudice but those who are fascinated with the inner workings of Hollywood as a whole.

Following this, “The Major’s Agenda” is an interview with actor Michael Ironside. Ironside is one of film’s finest character actors, and it’s a pleasure hearing him speak. Ironside dishes on multiple topics including: his character’s original demise, the eccentricities of Rip Torn, and his intimidation with the talent associated with Extreme Prejudice. While not as in-depth as the Walter Hill interview, this twenty-or-so-minute sit-down hits all the right notes one could hope regarding a retrospective interview.

“The War Within” is a 20-plus-minute interview with actor Clancy Brown. Brown makes for an enjoyable listen as he talks about the shoot for Extreme Prejudice, stories from the set, and his thoughts on each actor in the film. There is a kindness that radiates from Brown as he talks about the fun times during the movie’s production. There’s nary a bad thing Brown has to say while offering plenty of behind-the-scenes production information. “The War Within” is another solid interview.

Vestron Video also included a vintage electronic press kit (EPK) from the film’s initial release. While this plays more of a puff piece than other features, this EPK does include interviews with Nick Nolte and the late Powers Boothe, which is welcome as this is their only appearance on this disc. There’s not much to glean from this feature, but it is worth watching to hear Nolte and Boothe’s comments about the film’s production.

The disc also comes with marketing material featuring the teaser and theatrical trailer, a handful of television spots, and a stills gallery. The gallery features shots from the finished film, behind-the-scenes stills, and variations of the theatrical poster. 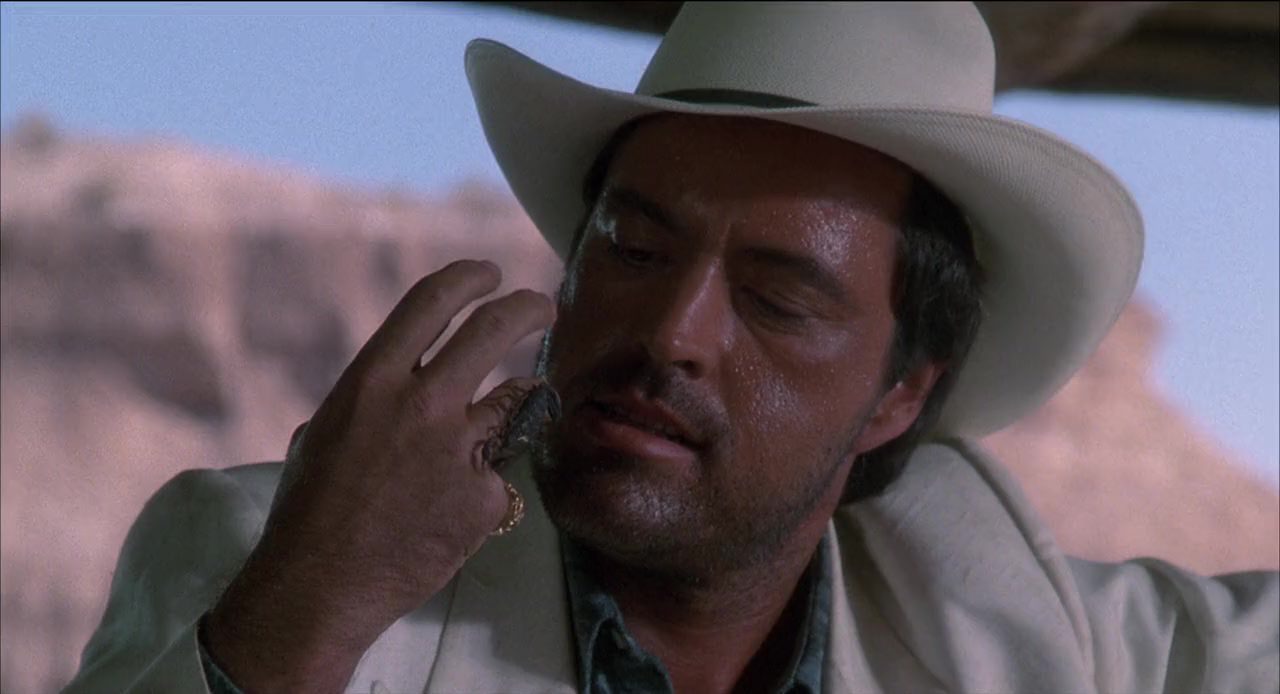 And there you have it! While I have struggled to remember parts of this film, revisiting Extreme Prejudice was a welcome time. Top-to-bottom, Extreme Prejudice has talent to spare, and while not top-tier Walter Hill, it’s still better than most action movies of the current day. Vestron Video did the film justice with an excellent array of features, highlighted by an informative commentary and an in-depth interview with Walter Hill. If you like ’80s-era Walter Hill or are an action connoisseur, this Blu-ray of Extreme Prejudice is for you.