There are two ironies about Black Widow, the long awaited solo vehicle for Scarlett Johansson’s Natasha Romanoff in the Marvel Cinematic Universe.

The first is that someone else entirely steals the show, namely the up and coming Florence Pugh, who brings to her Red Room assassin Yelena Belova not just the expected skill for combat but a quirky sense of deadpan charm that Johansson simply does not have the chops to provide. The second is that Black Widow itself, long mooted even before the MCU as we know it took root, has arrived at entirely the wrong time. It feels like an anachronism in the grand scope of this universe, and displays just how far the MCU has travelled since the origin story of Iron Man back in 2008.

For the record, Black Widow is in no way a bad film. This might be a qualifying statement but Marvel, in my experience, rarely make bad films in this universe (or TV shows for that matter now). They don’t always reach greatness, with examples such as Black Panther or Avengers Assemble more of a rarity, but they frequently provide strong, self-knowing slices of modern, popcorn entertainment. Sometimes they play the middle and that’s where Black Widow sits. It is what has been sometimes described online for MCU entries as ‘mid-tier Marvel’; films that don’t quite pierce the firmament of truly great comic book pictures yet remain entertaining in their own right. With Black Widow, this feels a missed opportunity. 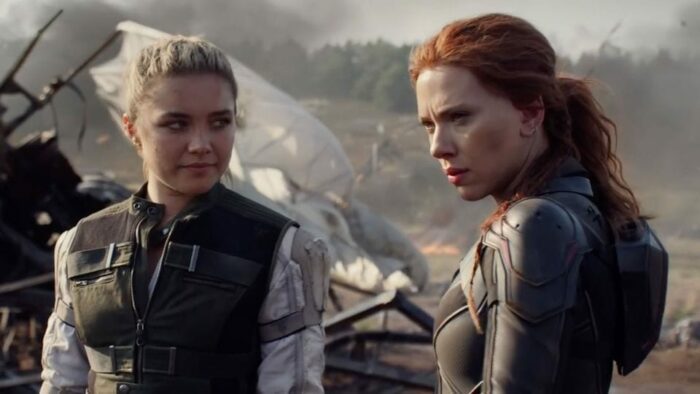 Plans to produce a Black Widow comic adaptation have existed since the pre-MCU days, in which Marvel’s properties were spread out amongst different production companies and their superheroes existed in their own incubated bubbles. David Hayter, writer of Bryan Singer’s original X-Men film, talks about a draft he developed around 2004:

What I tried to do was use the backdrop of the splintered Soviet Empire—a lawless insane asylum with 400-some odd nuclear missile silos. It was all about loose nukes, and I felt it was very timely and very cool. Unfortunately, as I was coming up on the final draft, a number of female vigilante movies came out. We had Tomb Raider and Kill Bill, which were the ones that worked, but then we had BloodRayne and Ultraviolet and Aeon Flux. Aeon Flux didn’t open well, and three days after it opened, the studio said, ‘We don’t think it’s time to do this movie.’ I accepted their logic in terms of the saturation of the marketplace, but it was pretty painful.

This was a different time for Marvel, before the dominance of their brand in cinema culture and the ubiquity of comic-book superheroes in the pantheon of modern entertainment, and Black Widow—much like many of the MCU heroes we now take for granted—was not a character from comic lore who was well known to the masses as Spider-Man or the Hulk would have been. At that point, a Black Widow movie would have been a gamble and likely would have required shoring up with a major action star to draw in punters. You can imagine an alternate universe where a younger Angelina Jolie (soon to make her Marvel debut in Eternals) put on the tight suit and a Russian accent.

It was perhaps logical that, initially, the character of Natasha Romanoff was folded into the MCU as a supporting player in Iron Man 2 and threaded via Avengers Assemble into a series of films beyond. Scarlett Johansson did also fit the idea of a ‘named’ actor stepping into the character’s shoes, known around 2010 for her possibly still career-best turn in Sofia Coppola’s Lost in Translation primarily (or Michael Bay’s Logan’s Run knock off The Island). Emily Blunt was first cast but had to pull out and while she subsequently became just as big an A-lister, at the time she was less emergent than Johansson, and the MCU was still, it’s easy to forget, establishing itself on major cinematic names: Robert Downey Jr, Samuel L. Jackson, Edward Norton etc… Now the A-listers are knocking Marvel’s door down for a role. At the beginning, this would not have been the case. 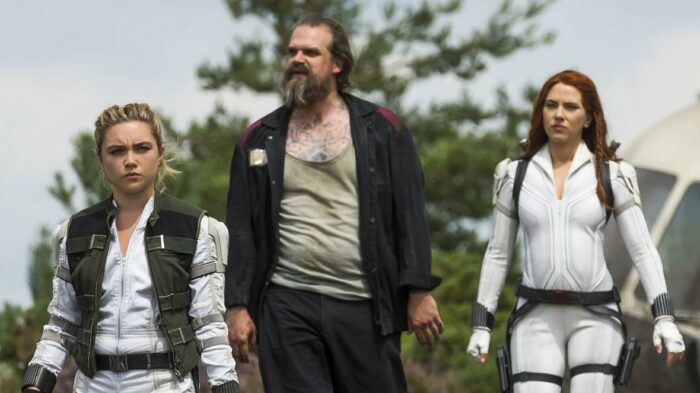 Point being, at the start of the MCU, a Black Widow film might still have been something of an unknown quantity in terms of box office gains. As Hayter intimated, sadly audiences were not turning up for female-led action pictures during the 2000s, perhaps a sign of the latent sexism in fandom circles that had seen the majority of major franchises be dominated by male performers. This began to change across the 2010s, as female voices in front of and behind the camera began, steadily, to gain greater traction.

A female director was expressly sought when Black Widow finally started gaining production traction after Avengers: Age of Ultron, where audiences reacted positively to the flashbacks revolving around Natasha’s story and liked the idea of learning more. Cate Shortland was eventually hired on the back of Johansson enjoying her earlier film Lore, and following the #MeToo revelations, post-Harvey Weinstein, they were resolved to make a film that dealt with empowered femininity at the core, as Johansson expands on:

We had to comment on what is this incredible movement of women supporting other women, and coming through these shared experiences of trauma on the other side by really coming forward and supporting one another. At the very beginning of really seriously talking about what this could be about, it was right during the beginning of the #MeToo movement and felt like, you cannot miss the opportunity to draw the comparison between these two things.

Yet there remains a distinct feeling while watching, and enjoying, Black Widow, that it has arrived at the wrong time.

Covid-19 can, of course, be blamed for this in part. Shortland’s film has been delayed by over a year thanks to coronavirus restrictions, having originally been earmarked to arrive in May 2020, just before the intended launch of the TV arm of the franchise and the deliberately more mind-bending concepts such as WandaVision or Loki. Yelena was supposed to feature, reportedly, in The Falcon and the Winter Soldier, as was Julia Louis-Dreyfus’ Valentina (my bet would be that Yelena was present when Val introduces US Agent). Plans were forced to change to some extent, with Black Widow designed to serve as the final epilogue to Phase Three after Avengers: Endgame, following Spider-Man: Far From Home, with presumably Shang-Chi and the Legend of the Ten Rings being designed to kick off in movie terms Phase Four. You can see the logic in place.

Even so, Black Widow still feels out of time, and would have better been produced and placed around the time the film is almost entirely set—2016, following the events of Captain America: Civil War. Everything about Shortland’s film works to match the aesthetic of that film, and to a degree Captain America: The Winter Soldier before it, indeed in more simplistic franchise terms you could badge Black Widow as a spin-off itself from those two films. On a creative level, Shortland’s film might take a bigger cue from Mission Impossible: Fallout (down to similar action set pieces and the same composer providing a similar score), but stylistically it tracks with Civil War, overlapping elements of story and thematic ideas. Natasha, much like Steve Rogers, has to confront the ghosts of post-Soviet psychological warfare and conditioning, and the latent legacy of the geopolitical Russian bear. 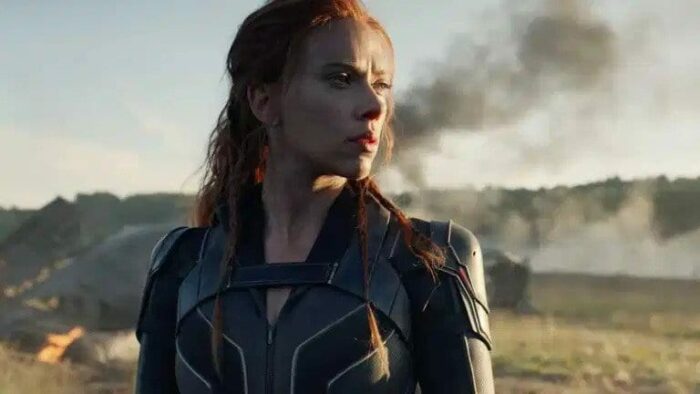 In arriving five years after Civil War, however, Black Widow unintentionally feels of a simpler time for this expansive universe, one in which the grounded world of espionage and traditional superheroic theatrics combined to provide the structure of the series. This all began to change after Avengers Assemble, and key films such as Guardians of the Galaxy or Thor: Ragnarok, which helped further transform the MCU from simply a ‘superhero’ franchise into a much broader combination of adventure, science-fiction and action capable of straddling half a dozen genres. Such expansion is only set to continue the further Marvel explores various aspects of the universe. Recent outings such as Loki have explored time, while WandaVision digs into magic, and beyond that numerous properties are entirely set in space. Black Widow, in comparison, feels like a throwback, even as it serves to explore Natasha’s character and fill in a few spaces that, in truth, didn’t need to be sketched in.

This is not to say Black Widow should have remained unmade. Johansson arguably has earned her own solo film and the MCU should be promoting not just films that speak to diverse audiences, be it Black Panther or Shang-Chi, but also the female demographic who, historically, have been starved of feminine icons in what has always been a male-dominated space. More women are reading comics, making them and developing movies about them than ever before, and if Black Widow helps that process then all power to it. In serving to reject toxic father figures and abusive pillars of masculinity, and freeing the Widows of decades of male conditioning, Natasha’s epitaph is well-served, even if the character rarely stood out amidst the legion of bigger, bolder players in the MCU.

Black Widow simply should have been made years ago. If it serves to show audiences, and Kevin Feige’s team directing Marvel’s all-consuming cultural behemoth, that female representation should be baked into the future phases of this universe from the beginning, then Natasha’s swansong will have served a greater, long-lasting purpose. May she rest with that peace.