When you think of classic buddy-cop films, what comes to mind? 48 Hrs? Of course, that’s a classic. Rush Hour is definitely on the list. And let’s not forget the iconic Lethal Weapon. If one mentions buddy-cop films, Lethal Weapon will probably adorn the top of most lists. What may not find itself on most lists, let alone the top of the list, is the subject of today’s article: Real Men. 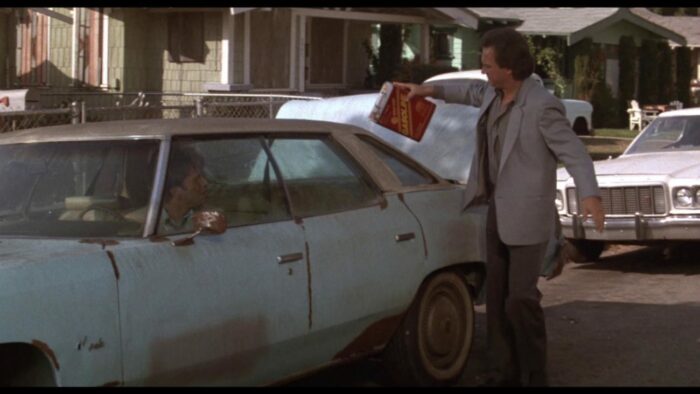 To get this out of the way first, technically, it’s not “buddy-cop” per se, as neither character is a cop. James Belushi stars as CIA Agent Nick Pirandello, whose assignment is to locate a civilian, Bob Wilson (John Ritter), and bring him cross-country for a meeting that could save all humanity on Earth. Along the way, the meek and timid Bob learns to build his self-confidence while the womanizing and over-confident Nick adapts to normalcy as love crosses his path.

While the set-up to Real Men sounds paint-by-numbers and formulaic, I can assure you it’s anything but that!

To showcase the film is not how one would expect it to go: we are introduced to John Ritter wandering through the woods with a map and a glass of water. He is then shot dead by an unseen assailant. So, roll credits, then? If we’re talking about opening credits, then roll ’em!

The character John Ritter plays during the opening moments of Real Men is not Bob Wilson. This character, CIA agent Pillbox, was killed trying to complete an assignment. As Bob Wilson resembles Pillbox to a T, Nick is tasked with recruiting Bob for a cross-country adventure like no one has ever seen.

The movie wastes no time as we get to see James Belushi’s Nick Pirandello in action. Watching Nick in his element, the audience understands the type of film that awaits them. You get quick-witted action, a breezy vibe, and a sense of absurdity one might not expect. Belushi treats Nick as an agent who has seen-it-all but enjoys his work to the point that it has become second nature to people trying to kill him, and he has no qualms dispatching any number of bad guys that try to get in his way. Words cannot do justice to the absurdity of how Nick can take down these random and nameless bad guys with such ease, even making time to have a moment with a topless woman in between gun battles.

We then follow Nick as he contacts Bob to trek across the country for a mission so vital—the world is at stake! Without venturing too far into spoiler country, the film moves along at a welcoming pace continuing to build onto the established absurdity until a climax so wacky it would seem out of place in any movie but this one. 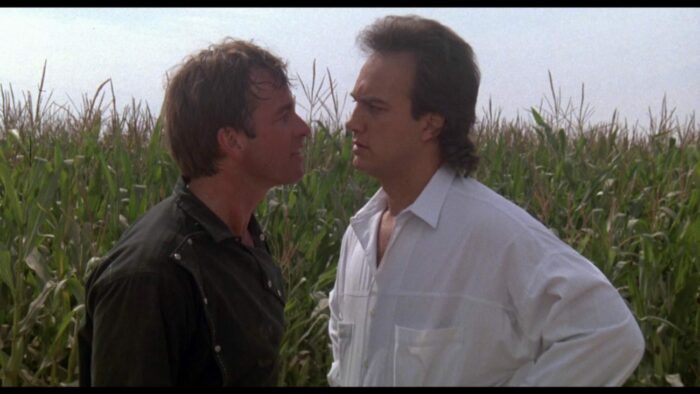 The way I have described Real Men gives the sense of a routine picture of mismatched partners joining forces to take down a common enemy. And, to that end, this is true. What makes a film like this stand apart lies with the individual moments of absurdist humor that writer/director Dennis Feldman weaves into the movie’s narrative. Ever seen a gang of CIA agents dressed as clowns plot an attack in an alley? You will. Ever want to exit a scene via a random helicopter? Sure you do! It’s silly moments like these that give levity to what would otherwise be a bland and forgetting action/comedy.

The writing is a big part of what makes Real Men a classic (in my eyes), but it needs comedic chops to make the premise work. James Belushi has never gotten the appreciation he deserves, and he makes for a charismatic and confident hero. He’s world-weary—nothing is a surprise to him anymore, and he lives life like he’s consistently playing a video game of the easiest difficulty. It’s a challenging line to walk as he knows how to get the job done but is warm enough that you want to take this journey with him.

John Ritter is even better as the shy and meek Bob Wilson. Bob is the main character and the eyes for the viewer. We see the nonsense that he experiences, but are also by his side as he becomes a stronger and more self-assured character by the end credits.

I was never a fan of Three’s Company—I never appreciated John Ritter as a leading man; only later in his career did I understand the subtle nuances John Ritter gave his film and TV characters. Watching his performance as Bob Wilson, it’s impressive to see how John Ritter generates the biggest laughs with just a word or a look. Teaming him with James Belushi is a match made in heaven; it may not seem like it at first, but you sense it from the first frames to the last.

So, why has Real Men fallen by the wayside throughout the annals of pop culture history? It could be the lack of star power. I’m not knocking the talents of Belushi, Ritter, or Feldman, but from a marketing standpoint, the masses may not have been as enticed to see a film like this without an “A-List” name headlining. It may have been a lack of faith from the distribution company. When the film was released in 1987, it was dumped into a few hundred theaters and left to die—accumulating a worldwide gross of under one million dollars! Who knows why it didn’t resonate? We need to not live in the past and look toward the future. The future is this: Real Men needs to be rediscovered by the masses.

I have loved Real Men since I was a young kid. I distinctly remember catching it on my local cable station in the late 1980s. It clicked with me immediately and has been a film I hold near and dear to my heart. From the good-natured humor to the (in my opinion) iconic and unusual score, the ingredients of Real Men come together to create a satisfying and distinct flavor of film. 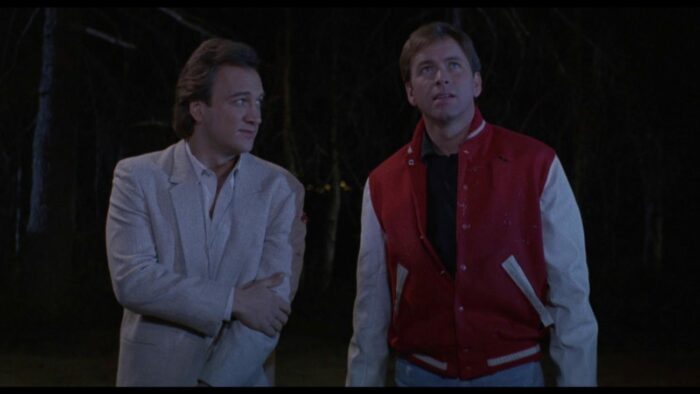 Thankfully, the film is getting reappraised within the pop culture zeitgeist. Once long forgotten, Real Men got some love courtesy of Kino Lorber, who recently released the film on Blu-ray, allowing a new generation of filmgoers to experience this one-of-a-kind comedy.