The beacon of the future flashes on the horizon, hopeful and daring. The future is dressed in glimmering skin-tight jumpsuits and fires rayguns at cylindrical rocket ships. Flying cars and jetpacks freckle the skies. The beacon of the future is also a dismal blip of a mushroom cloud compacting, readying itself to send out ominous shock waves to flatten cookie-cutter neighborhoods and smite the remaining life of a Southwestern desert terrain. Which of these futures is correct? That depends on whether you enjoy Raypunk or Atompunk.

There are two closely-knit, though not necessarily always interchangeable, subgenres of the Golden Age of Science Fiction. Raypunk, or in architectural design circles referred to as Raygun Gothic, is the retrofuture with an eye for a bright future. Atompunk generates dystopian vibes and warns of a dreaded future in which the atomic bomb desecrated all humankind. Atompunk is bleak and afraid. Raypunk is quite excited for what tomorrow has in store.

Despite both genres coexisting during the same time period, from the 1930s to the 1960s, their juxtaposing ideas make for interesting discourse. Here are examples of both Raypunk and Atompunk films, television shows, music, literature, video games, and even an example you can physically experience.

Any science fiction film to come out during the 1950s through the 1960s and certain episodes of The Twilight Zone were the template for the quintessential Raypunk or Atompunk story. Popular Raypunk examples include The Jetsons, Disney’s Meet the Robinsons, Futurama, Duck Dodgers which was the Loony Toons adaptation of Buck Rodgers, Johnny Quest, The Iron Giant, and The Incredibles. If it was set in space with ray guns, it’s a good chance that it’s Raypunk. Perhaps the eeriest of Raypunk films is the dreaded Forbidden Planet. This film is a double-edged sword in the world of science fiction film. On one hand, it’s an aesthetic masterpiece that inspired the makers of Star Trek and Star Wars as well as most science fiction films. On the other hand, its disjointed plot makes for a confusing but enjoyable experience.

The music of the Raypunk and Atompunk subgenres is typical of the 1950s sci-fi flicks of eerie string ensembles of high pitch and electronic noises mimicking a space-age gadget or robotic entity. Most of the music of this genre isn’t necessarily songs as much as it is a combination of sounds. Doctor Steel and Stereolab “Space Age Bachelor Pad Music” are common references that harken back the 1950s sci-fi music. The New Albion Guide to Anaglogue Consciousness, an album of retrofuturistic music, by Paul Shapera has several tracks dedicated to Raypunk and Atompunk. One of which is linked below for your enjoyment. Tom Smith, a Filk songwriter, wrote and performed “Rocket Ride,” a tribute to the Raypunk aesthetic.

The world of Raypunk and Atompunk literature is massive and mostly concentrated in the comic book and science fiction magazine mediums. Buck Rodgers and Flash Gordon are Raypunk classic comic books but Dan Dare is a less commonly known British Raypunk story created during the 1950s. The series was created by illustrator Frank Hampson and is based on the 1950s envisioning of the future, the 1990s. Needless to say, their representation of the future was much more atomic in nature, both literally and aesthetically. The protagonist is Dan Dare, chief pilot of the Interplanet Space Fleet engaged in countless intergalactic adventures. Ignition City, written by Warren Ellis and illustrated by Gianluca Pagliarani, is a newer addition to the genre that adds a bit more of a modern twist.

The short story “The Gernsback Continuum” by William Gibson is arguably the piece that started it all, as the author describes the protagonist hallucinating a futuristic city beyond the wiles of his imagination. Gernsback contributed much more to the subgenre in his submissions to Amazing Stories magazine, which is about as Raypunk as science fiction magazines get along with its counterpart Astounding Science Fiction. Most notably of the latter is John W. Campbell’s work. Books like Operation Future and Foundation (1951) emphasize both the aesthetics and the ideals of the subgenre, perhaps better than the pre-mentioned titles. Other works include Magnus Robot Fighter, Zot!, Mike Baron and Steve Bude’s Nexus, Tom Strong by Jonni Future, Buck Godot: Zap Gun for Hire, and Zeerust.

Fallout 4 is the most iconic, well known Atompunk video game. The game itself is designed to look like a post-apocalyptic world if the atomic bombs had hit in the 1950s. It’s a nuclear wasteland with trace remnants of Raygun Gothic diners, gas stations and shopping malls. Fallout 4 is the grim tale that the science fiction tales of the day would have wanted to see. Another modern Atompunk game is The Outer Worlds, a dystopian RPG game in which the player is an anomaly in a space colony of varying factions that all want control of the entire colony. On the flip side, Destroy All Humans is a Raypunk game, a literal interpretation of the subgenre as you play as an alien with a raygun that kills humans. The humorous nature of the game adds to the overall Raypunk feel. Other 8-Bit style games like Captain Gorden, Defender of Earth! and The Adventures of Rad Gravity stick a little closer to the original Raygun Gothic style. Captain Gorden especially, given that it is a space adventure game with 1950s aesthetics and sentiments. Others include Yooka-Laylee, The Deadly Tower of Monsters, Team Fortress 2, and Space Channel 5. 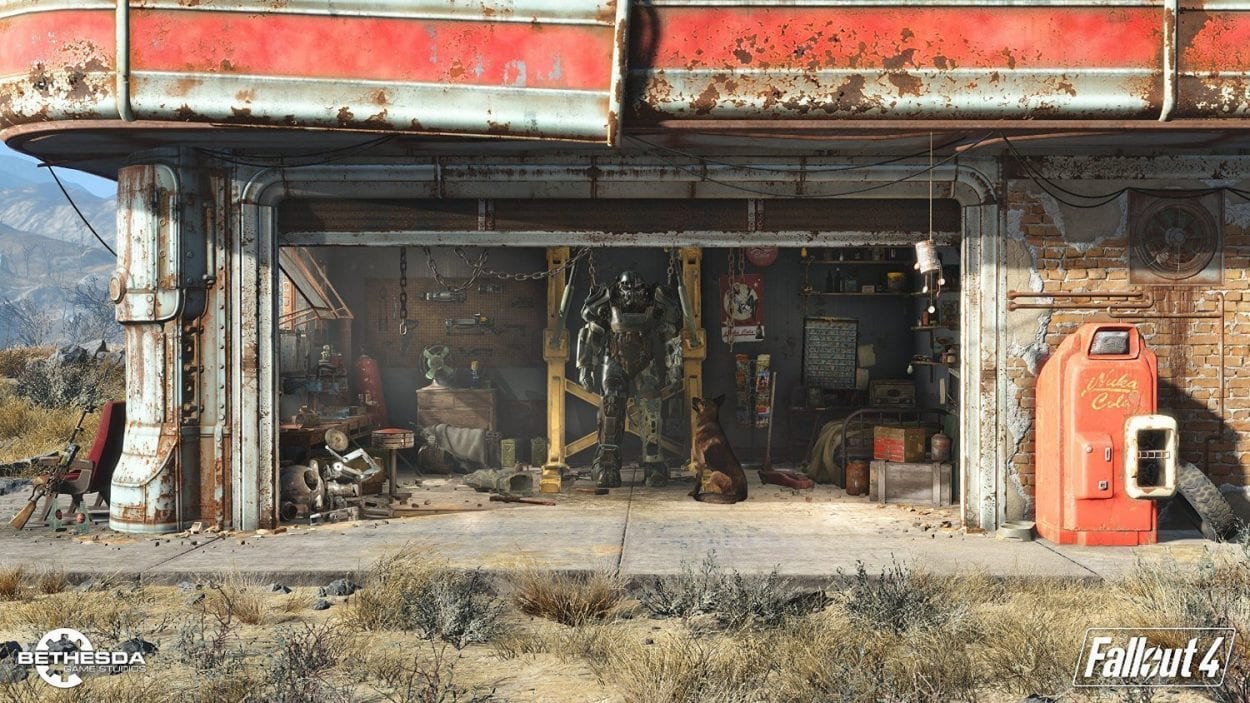 For many years, Disneyland has seen many Raygun Gothic influences in its beloved Tomorrowland section. In recent years it wasn’t as obvious as it was back in the 1950s, but the influences remain in a particular rocket ride known as the Astro Orbitor. This simple ride features rocket ship seats in a Tilt-A-Whirl fashion style ride. Back in the 1950s, Tomorrowland was Raygun Gothic to the max as the American entertainment world’s fanaticism with it reached its peak. The theme park still has its fair share of Raygun Gothic style to enjoy, particularly in its buildings.

Varden M Frias is an independent author of gothic horror, Lovecraftian fiction, and science fantasy. He has self-published five pieces on Amazon via Kindle Direct: Colden, It’s Novelin’ Time: A Concise Guide to Drafting Your First Novel; Lord Samhain and Other Halloween Tales;  The Librevore and Other Tales and the latest of which The Caldera’s Vice.