Time. And space. All the things we can’t ever seem to fill. The 2018 Swedish film, Aniara, now streaming on Hulu, is a darkling meditation on our struggles to conquer voids both internal and external, adapted by the co-directors, Pella Kagerman and Hugo Lija, from an epic space poem of the same name. In the end, it’s a matter of scale. The filmmakers faced restrictions of the medium that directly conflict with the message. How do you give a sense of 145 trillion miles on a forty-inch television screen? How do you portray six million years in a 106-minute film? Aniara employs several techniques in the attempt through the use of title cards, pacing, framing, and dialogue. Each element in Aniara is in tension with its opposite, and each opposite, each dialectic, gives way to a vibrant mesh of meaning in the tension between.

First, some basic plot. The Earth has passed beyond dying into death. The first faces we see are mournfully praying or horrifically burned, whether from wildfires or solar radiation is never clear, but the sheer prevalence of scarred and blistered faces throughout the movie leads us to believe the latter. We start on a space-bound elevator heading up by guidewire to the spaceship Aniara, which will take them to their new home on Mars. The Aniara is enormous, a floating city with all the modern amenities down to the food court, miles long and wide, resembling a model ocean liner, still in the plastic sprue mold. For a mass of planetary refugees fleeing from a dying world, the two-week trip seems peaceful and hopeful. 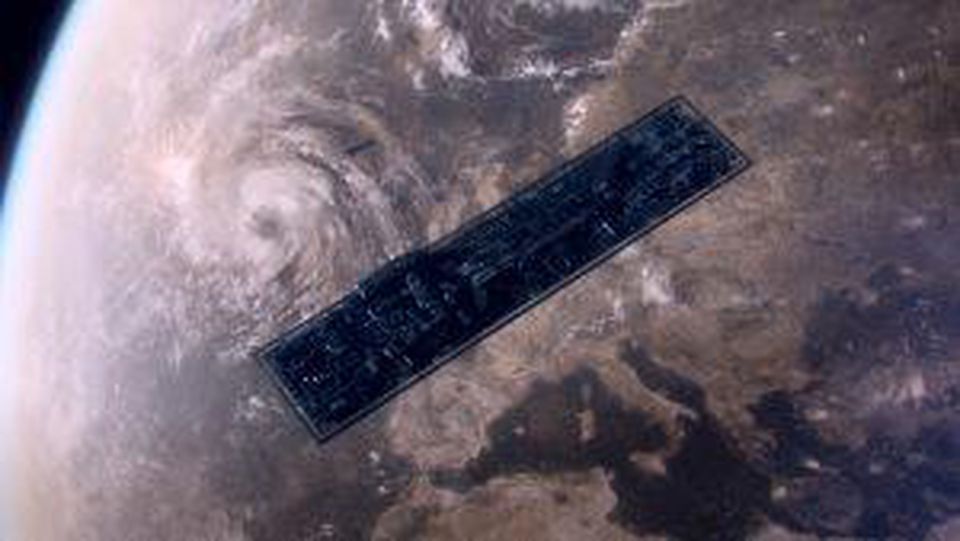 We see the film play out through the experiences of a woman we know only as MR, which stands for Mimarobe. What’s a Mimarobe? She’s the person on the ship charged with guiding the use of Mima. What is Mima? Mima is an artificial intelligence that can access our memories and present us with a pleasant dream of an uncorrupted Earth. Sort of an internal holodeck. Mima presents as a ceiling of calm blue that turns the color of the sun when providing dreams. The Mimarobe is trained to resist this influence, which is incapacitating to most, to watch over participants. 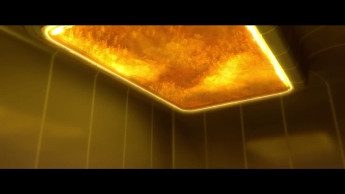 Like any great script, the themes are illuminated by the plot. In this case, the massive ship Ariana is damaged and knocked off its course by a tiny screw, space junk, most likely left by a prior starship on the same path, which pierces the nuclear reactor which powers the ship, forcing the crew to eject all its fuel. The Captain reassures the crew that though they are seriously off-course heading towards the Lyra system of stars (Vega), they will be able to use the gravity of the first solar body they pass to slingshot back on course. All of which is perfectly reassuring science-speak and all of which is complete bullshit. Even the lie he tells causes panic because the week-long trip has extended to at least two years. But it’s better than the never-ending truth. 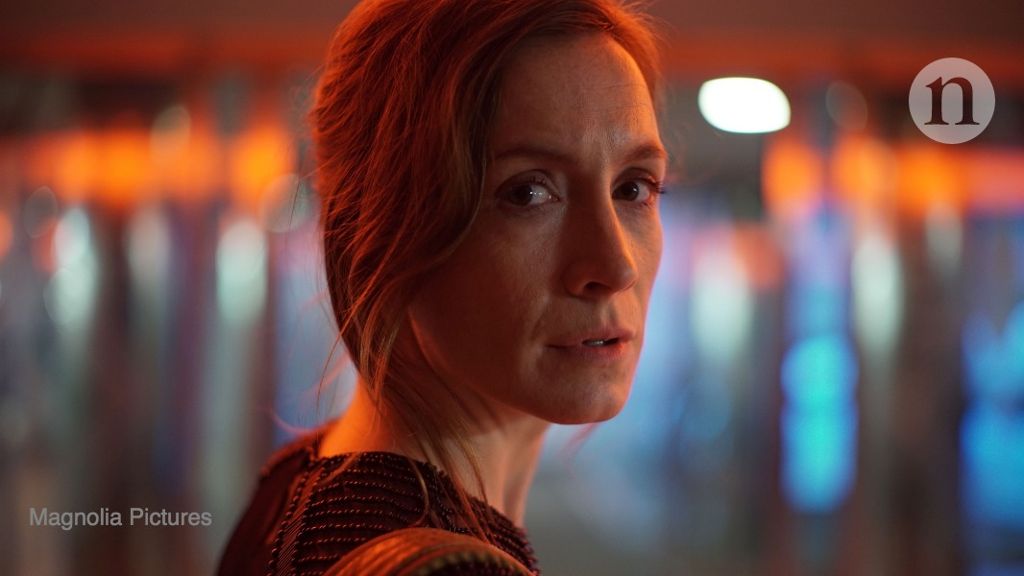 MR believes until she talks to her roommate about it, who happens to be the ship’s astronomer and who knows they are never going to encounter a solar body in their lifetime or many, many lifetimes. The astronomer provides the central metaphor for the film when she holds up her drinking glass and shows MR a tiny bubble imperfection in the base. She explains that the bubble is moving up through the glass at a rate imperceptible to the human eye. One day, far in the future it will burst through the surface of the glass, but that timeframe is so enormous that the bubble might as well be standing still. That’s the Aniara, as she poetically puts it, “a little bubble in the glass of the Godhead.”

Time and space. On Earth, all we’re doing is filling time and space. We bowl. We drink. We shop. We read articles online. We sleep together. We have children. We fight. We lock each other up. We lie. We hurt. Each person on the Aniara continues to do the same things. But the scale is out of whack. In our normal lives, we never seem to have enough time. Late for work. Late for teacher conferences. Late to write this article. On the Aniara, time is all they have. On Earth, there’s so much it seems like we haven’t seen and so many places we haven’t been, the world, just a tiny rock floating in space, seems enormous. The scale and the blue sky let us forget, for the most part, just how trapped we are. On the Aniara, space is the one thing they don’t have. They float in an ocean of emptiness, none of it accessible or useful in any meaningful way, like floating in a raft on the sea, dying of thirst. What we, as the viewer realize is that nothing in their life has changed. Their lives are no less meaningless than it was before the catastrophe; all their habits of ignoring the emptiness are still there. There’s even room for a listless DJ pumping out the most hilariously dispirited techno for some very zombie dance parties. But the constant black outside their windows, just will not let them forget the illusion.

The use of title cards and typography in the film should be called out for its effectiveness, for the way the filmmakers use it not just as signposts and shorthand exposition, the written version of voice-overs, but design them so that they actively contribute to the theme of the movie. We start with the opening credits, specifically the title of the film. The word “ANIARA” fades in, about half the height of the screen, floating over empty black. When I first watched, I saw something tiny, a speck really, moving past the letter ‘I’. A couple of playbacks later and I was sure it was the Aniara. It’s so small and impossibly distant that it’s dwarfed by the font size of the title. From the very beginning, the keystone is set for the structure built.

Prominent in the film are intermittent two-part titles, set at critical points throughout the film. Each consists of a time-frame followed by a chapter title. The immediate reference that comes to mind is the titles set through 2001: A Space Odyssey but whereas the titles in the earlier film are simply poetically suggestive of the events to occur, in Aniara they serve a specific function in helping the film stretch beyond the time limit imposed upon itself:

Kulterna – The Cults (more about these in a bit)

The care in selecting the time frames is obvious. We start with easily comprehensible times and move progressively towards time-frames that we can only repeat as words with no real apprehension. I can make goals for ten years from now or twenty, but I can’t even start to imagine the changes and complications that stand in the way of those long term plans. But every chapter is aimed at that final payoff chapter, six million years in the future. Each time we try to imagine the time jump. We try to empathize with the characters and the boredom and hopelessness they have felt in the times between. The movie stretches our scale of reference bit by bit until it breaks it. The difference between twenty-four years and six million leads us right back to that bubble in the glass. It might as well say “Jupiter and Beyond the Infinite” as easily as The Lyra Constellation and the Year 5,981,407. Aniara has it’s own Star Child reveal, but here it’s ironic, beyond our reach, and has no connection to humanity, if it even still exists back on Mars.

The cult section. Knowing it was there got me watching the movie in the first place. Initially, the Mima filled the role of religion on the ship. Worshippers walked into her sphere of influence and were dropped to their knees, overwhelmed by the ecstatic experience in their minds. But after the calamity, the sheer number of supplicants overwhelms the Mima. Her transference was a two-way street; she gave them peace and they gave her all their negativity and despair. Eventually, Mima collapses under the collective, psychic weight. The first sign of trouble noted by the Mimarobe is when Mima starts to speak, something there is no need for her to do and the fact that she does so is a sign of distress. All of which ends with Mima crying out: In the name of Things, I want peace! After which she self destructs. 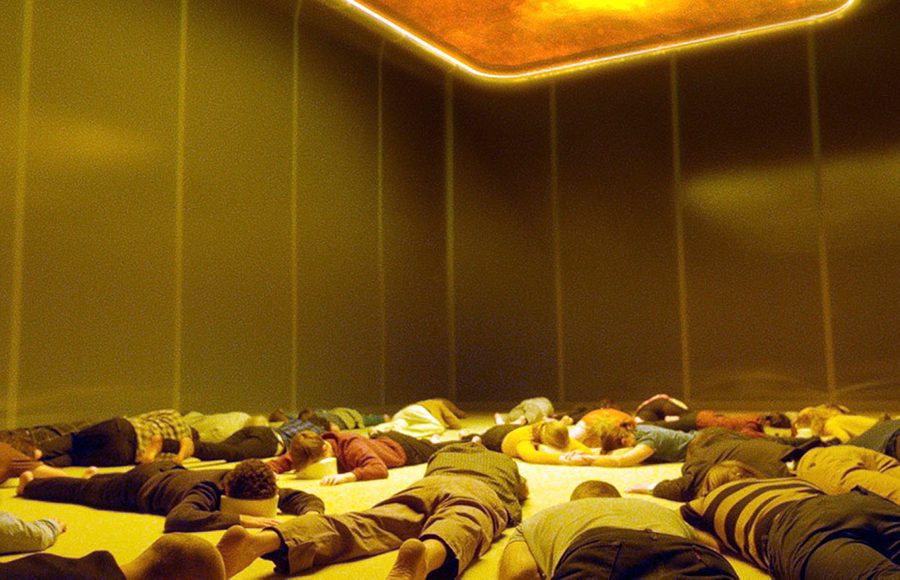 From Mima’s death, the religious impulse branches out in the ship. The scenes featuring individual cults are brief, but the mise-en-scenes are made distinct through smart use of staging and dialogue. Three different varieties are featured and as with everything else in this movie the use of scale, or lack of it, helps bring the desperation in religious feelings out. Each cult is a small group, in a similar state of dress or undress, localized to a very small space of the ship. The easiest way to identify them is by their ritual. The first we see in the cult section is what I noted as the “bring the light closer” cult. Peaceful and almost positive, they sit at windows facing the titanically distant stars begging them to come closer. Then we’re shown something much darker, the “forgive us” cult. What looks like a luggage cart is pulled down a darkened hallway toward the camera by two naked persons tied up like a team of horses. Behind the cart is another group calling out for forgiveness. On the cart itself, stiff as a Catholic Madonna, a young, nude woman is looking ahead with blind, milky eyes. That’s all you get of it, no explanation, origin or context. Just one of the weird paths of desperation and boredom have taken in the dark. Lastly, we see the Mimarobe drawn into a sexual cult that conducts orgies in the Mima’s room. They refer to it as her grave. 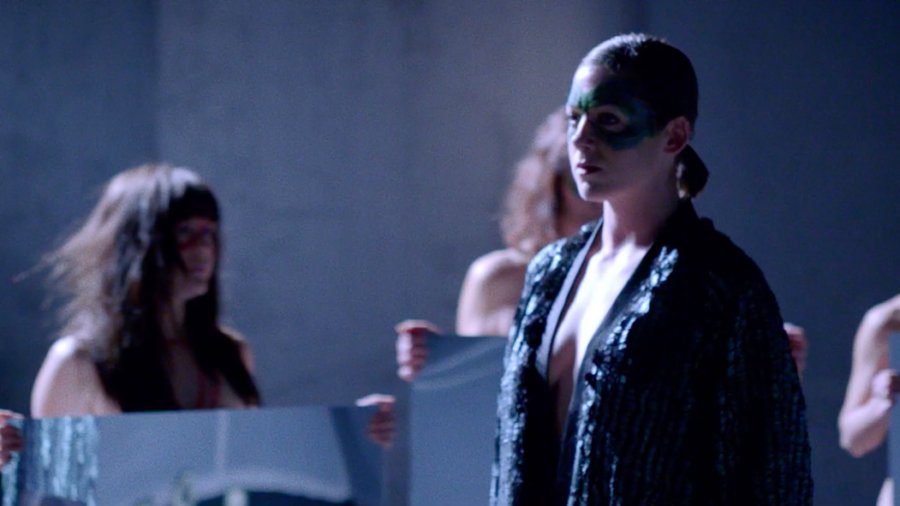 Aniara is dark, despairing, and philosophical. All reasons why I love it. I’ve tried to focus on just one aspect that I found interesting among many others. The tension between big and small, short and long and time and eternity is a constant theme both explicitly and implicitly. It is an entire film made in the image of Xeno’s paradox and is as difficult and fascinating as that puzzle.

Aniara is currently streaming on Hulu and I recommend you check it out.

Chad Hindman is a public defender and writer out of Nashville, TN. The constants in his life are his family, his books, and horror.