When going over the characteristics of a work of art, such as film, that makes it controversial, a few indicators can appear. Most of the time it’s from explicit violence, nudity, or language. However, in the film Ichi The Killer (2001) from director Takashi Miike, all three of these categories are utilized beyond the limit of typical social acceptability to create one of the most ghastly and shocking films of the 21st century, let alone all time. Miike, who has a reputation as a film provocateur with previous works like his Dead or Alive Trilogy, Audition (1999), or Visitor Q (2001), makes the ultimate film about violence both inflicted and received. By utilizing depraved main characters and shooting numerous scenes of physical and sexual violence, Miike reveals the world in its cumulative ugliness.

The film sets up the violent and sexually perverse atmosphere of the world almost immediately. When the titular Ichi (Nao Ohmori) witnesses a female sex worker being beaten and sexually assaulted by her owner from her balcony, he starts to pleasure himself before leaving quickly as the worker’s owner steps out to investigate Ichi’s presence, but instead only sees a comically large amount of s*men that the film’s title card rises and sinks from. This moment is the ultimate tone-setter of the film as it establishes the titular character’s perverse tendencies through the shockingly crude image of his bodily aftermath. Furthermore, this introductory scene reveals the often cruel, misogynistic, nature of the world as both men characters of the pimp and Ichi inflict pain upon the sex worker and enjoying the suffering she undergoes while being harmed. 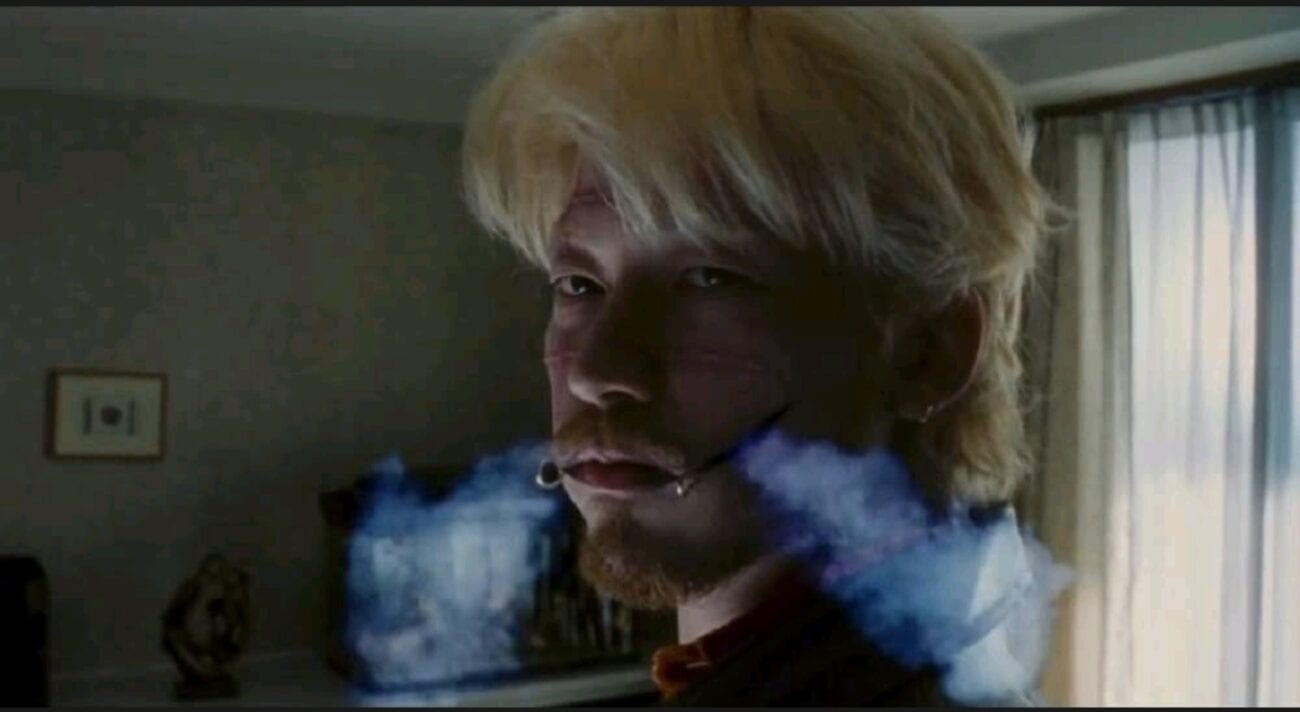 After this sudden introduction into the violent and disturbing tone of the film, the perspective switches between Ichi and the main character of Kakihara (Tadanobu Asano) a heavily-scarred Yakuza enforcer with facial piercings who investigates the disappearance of his crime boss. Unlike Ichi, Kakihara is much more menacing in his appearance and will use confrontation to achieve his goals of finding his boss, while Ichi is more cowardly by comparison. Whereas Ichi gains pleasure from watching pain inflicted upon women unless provoked or brainwashed, Kakihara has agency in his violence-inflicting methods. Whether pulling the skin off a man’s face or suspending the back of a man with multiple hooks and pouring boiling water on their skin in order to obtain information on his boss’s whereabouts, Kakihara instead loves to be directly involved in the pain of his victims.

Much like his previous film Audition (1999), Miike holds the camera on these scenes of torture and mutilation, intensifying the grotesque nature of the film as it rarely gives visual respite in cutting away for the audience. Furthermore, the bloodthirsty nature of Kakihara makes him a complex main character, as he mainly assaults and kills members of Yakuza gangs, but his tendencies towards torture and inflicting the highest threshold of pain possible prevent any sense of audience sympathy that would’ve been felt during the wave of brutal 1970s rape-revenge film protagonists. However, once Kakihara accidentally tortures an opposing Yakuza gang member that had nothing to do with his boss’s disappearance, Kakihara then undergoes possibly the most gruesome set-piece of the film in self-mutilation to appease the opposing Yakuza crime boss. With an intense close-up shot of Kakihara’s face as he holds out his tongue and holding with a nearby blade with his other hand, he cuts off the end of his tongue and offers it as a peace trophy. This segment is horrifying in its closeness to the camera, forcing the audience to view the bloody removal through the perspective of the equally-horrified Yakuza viewers within the room without any other visual escape or obstruction. This vicious setpiece also effectively characterizes Kakihara as the ultimate image of pure pain as he can easily self-inflict himself with the same brutal methods used upon his victims with almost no hesitation or fear, almost bringing a sense of equality to his violent actions throughout the film. 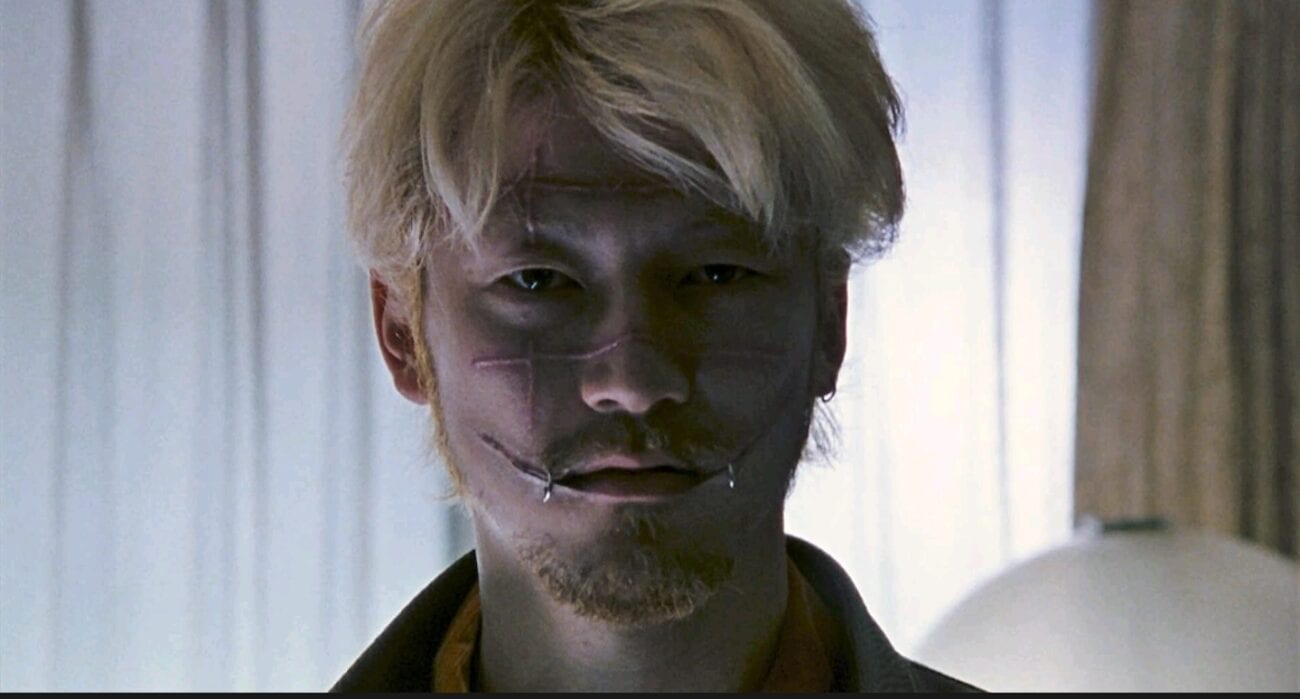 As the film progresses, the overall plot becomes more intricate with the involvement of Jijii, an ex-cop who uses brainwashing tactics on Ichi to brutally kill Yakuza members and start gang wars to eliminate Yakuza’s presence from Japan. Jijii, who’s also played by the similarly provocative filmmaker Shinya Tsukamoto, brings complexity into the overall atmosphere of the film. Whether a normal citizen, member of a crime organization, or those previously involved in law enforcement, the film overall becomes misanthropic with everyone either inflicting pain or receiving unnecessary pain and showing that the innocents within this world are just as susceptible to a brutal death as any of the hardened Yakuza crime members. While Ichi is shown to be typically cowardly in everyday life with constant intimidation from random men in social settings and having a videogame addiction with Tekken, Jijii instead periodically brainwashes Ichi to become a homicidal maniac that uses elaborate fighting choreography (possibly inspired by those same Tekken fighting styles) and bladed boots to dismember and disembowel Yakuza members and anyone unfortunate enough to enrage him during his states of psychosis. Compared to the torture scenes involving Kakihara, the filming and editing style become more-erratic during these Ichi fight scenes as quick cuts and sped-up movements pair up with the quick brutality inflicted by Ichi. This disjointed sense of filmmaking also pairs well with the character of Ichi as his unstable emotional and physical state adequately reflects the unstable filming techniques, while Kakihara is calmer and has more control over his violent tendencies, bringing with him a more stable filming style.

As Ichi becomes more unstable with his brainwashing by Jijii, the action scenes become increasingly complex and choreographed with numerous amounts of both practical and digital gore splattering the film screen. Ichi, whose pleasure comes from seeing women being assaulted physically and sexually, brings an uneasy atmosphere to the already demanding nature of the film. While there’s only the slightest amount of black comedy in Ichi’s offerings of becoming the woman’s abuser before killing them as they resist in self-defense, the film leads to an overall dark conclusion. As Kamihara realizes that Ichi was involved in his boss’s killing and disappearance, he instead becomes focused on Ichi becoming another physical punisher that can inflict the pain that Kakihara desires upon himself. Compared to an earlier scene of Kakihara not feeling that pain inflicted upon him from a female companion was genuine enough, Ichi instead becomes a vessel for the ultimate desire of Kakihara. But, as their final fight on a building rooftop is interrupted by Kakihara’s henchman Kaneko (SABU) and his nearby son Takeshi (Hiroshi Kobayashi, Ichi instead kills Kaneko and sobs on the ground as Takeshi kicks him. With the constant sobs of Ichi, Kakihara instead becomes disappointed in their lack of a fulfilling fight and jumps of the building to his death while hallucinating that Ichi actually caused him to die. This leads to a contemplative ending as a grown-up Takeshi walks with schoolchildren as the nearby corpse of Jijii hangs nearby.

This relatively slow ending for such a stimulating and violent film works well as it breaks down the myth of an iconic final fight to show the broken nature of both Kakihara and Ichi. While both men deal in violence throughout the film’s running time, they both seek to gain greater pleasure that they cannot achieve as Ichi never finds a woman that he can freely abuse l, while Kakihara will never retrieve the abusive crime boss he’s dedicated his life towards. And as both men fight, they cannot give each other the happiness they seek as they’re both unhappy in their own personal lives and no matter how many men are mutilated or women are assaulted, nothing can change that they’re both broken men in a crumbling world. 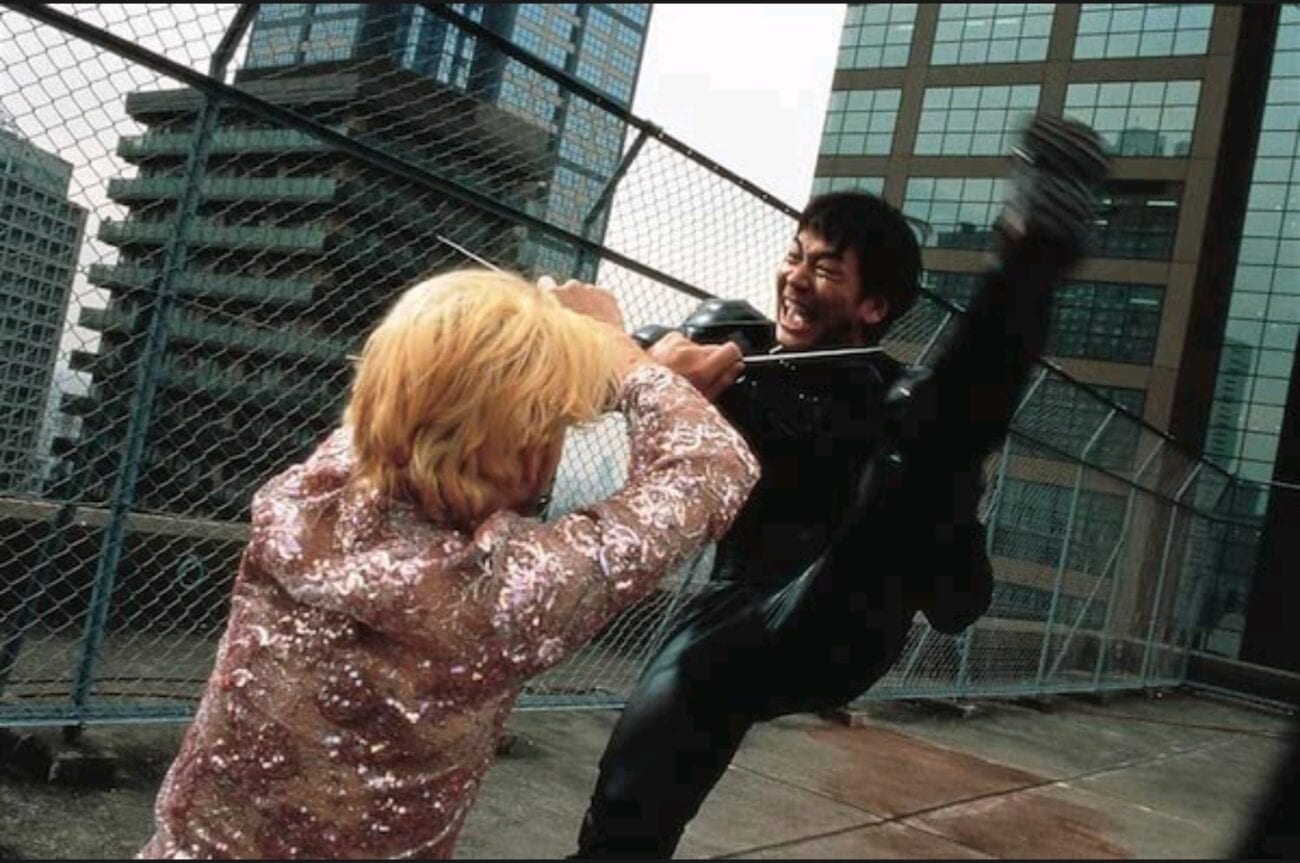