Fans of director Brian De Palma noticed an apparent trend in the projects he made from the early 1990s onward to the 2000s. De Palma’s first work of the ’90s was, of course, the calamitous box-office and critical disaster The Bonfire of the Vanities, which only made back 15 of it’s $50 million dollar budget. This marked two box-office duds in a row for the director after 1989’s Casualties of War (although that movie at least, earned critical praise).

The director then went back to his smaller suspense roots with Raising Cain in 1992. Not a major hit, but it did earn almost four times its modest budget at the box-office and De Palma proved he could turn in a decent thriller. Then came 1993’s deliriously enjoyable (and expertly crafted) gangster hood suspense thriller Carlito’s Way which not only demonstrated that he was one of the most visually inventive directors working at the time, it also shown that he hadn’t lost his sense of humor – a quality dearly missing from every movie of his since 1987’s The Untouchables.

The pattern was emerging though. For one Hollywood studio project, De Palma would make his next film smaller and more personal. It was as if he was making (to borrow a phrase from actor Ethan Hawke) one for “them” and then one for “him”. His next movie was definitely one for “them”, but De Palma had fun with it too. Even if he got into arguments with that project’s leading man and producer, Tom Cruise. Mission: Impossible was a monster hit for the director in 1996. But it would be his last major smash.

In 1998 came the smaller, more personal (one for him) Snake Eyes and in 2000, the mega-budget Mission To Mars (one for them). Neither movie set the box-office on fire, in fact, Mars lost millions and De Palma was right back where he started ten years prior. So where was the logical place to go? A smaller, personal, back to roots, 100 percent pure De Palma movie: 2002’s Femme Fatale.

Whatever the reason, violence is replaced by silence. Well, not total silence, but oddly, the first half of Femme Fatale is extremely light on dialogue. In fact, our leading character Laure Ash (a very game Rebecca Romijn–Stamos) doesn’t say a thing on the screen until the 17-minute mark in the movie. Laure is introduced to us as she lies naked on a hotel room bed in France watching interestingly enough, the 1944 film noir mystery Double Indemnity.

Into her room bursts a man known only as ‘Black Tie’ (Eriq Ebouaney). He, Laure and another man, Racine (Edouard Montoute) have planned an elaborate and daring heist which is to occur during the opening night of the 2001 Cannes Film Festival. Laure is to lure a model named Veronica (Rie Rasmussen) from outside the red carpet to an inside ladies’ room. Veronica is wearing nothing but a diamond named “The Eye of the Serpent” and it is embedded with ten million in diamonds. Here, one can assume De Palma might have conceived of this expensive dress item when in 1996, Claudia Schiffer became the first Victoria’s Secret model to showcase the first-ever $1 million dollar bra during their company’s annual fashion show. In 1999, the year De Palma most probably conceived of the idea, Heidi Klum dazzled with a $10 million bra containing 2000 starry diamonds. 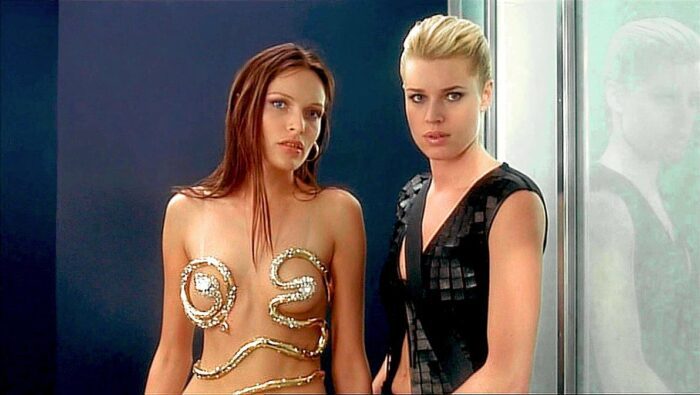 Once Laure has lured Veronica into the bathroom, the two engage in some heavy kissing, fondling and undressing. They are not alone however, as Black Tie is crouched outside switching the stripped-off diamond ensemble with fakes. Meanwhile, Racine is inside one of those tight tunnels De Palma loves to showcase in his films, attempting to cut the power supply to the premises, which just happens to be premiering the festival’s opening night feature, East/West. Inside the screening room, all eyes are on the large screen. Back in the ladies room, Laure’s eyes are on the task of undressing Veronica and watching as Black Tie makes his exchanges. On the soundtrack, we hear a 13-minute adaptation of Ravel’s Bolero by composer Ryuichi Sakamoto which plays during the entire heist. Much like Mission: Impossible’s CIA infiltration scene and The Untouchables train station scene, the dialogue is at its absolute minimum and the action is told through editing and music.

Of course, when you’re dealing $10 million in valuables, there’s bound to be a double-cross on someone’s part. In true De Palma form, trusting those close to you is often a liability (think of the crucial double-crosses in Carlito’s Way and Mission: Impossible.) Laure turns on both her partners (who injured, are captured by police) and remains in France, to be mistaken by an elderly French couple for their daughter, Lily, who just lost her husband and child in an accident. Yes, Laure looks exactly like Lily, so why not assume her identity in another country? Implausible? Extremely. Even for a De Palma movie but when you’re in the hands of a master, best to go along.

Laure has indeed left her past behind and created a new identity as the wife of an American ambassador (Peter Coyote.) It is now 2008 and all seems to be going well for her until two things from her past catch up to her at the same time: a French Paparazzo named Nicolas Bardo (Antonio Banderas) who remembers taking her picture seven years earlier and her former partners who have just been released from prison and are very much out for payback.

Her survival instincts kick-in and she is scheming for her life. Her existence, however, is another matter as we don’t know which existence she’s fighting to retain: former thief turned on-the-run double-crosser living in exile as an American ambassador’s wife; or a ruthless, duplicitous, seductress who chews men up and spits them out for sport and cash.

With Bardo’s photo finding its way into the French tabloids, it doesn’t take long for the newly sprung bad guys to figure out who and where Laure is. It is time for her to step out from under the safe identity of Lily and this Laure is full of bite and ready to slip right back into her five-inch leather boot heels—complete with a stylish, bad-ass Carlito-style long leather trench. Laure has been lying low for seven years and now her time to face her past has come. Laure will now have to outsmart all three before her life is shattered—or worse.

This is the point where Femme Fatale finally begins to crackle with some old school De Palma glee, The Dressed To Kill and Body Double De Palma. The puzzle has been assembled and now it’s time to knock the thing off the table onto the floor and fling the pieces up in the air.

Romijn–Stamos sizzles as the bad-babe in this section of the movie. Part Catherine Tramell from Basic Instinct and part Xenia Onatopp from Goldeneye, Laure, now unshackled from living the life of the demure Lily, is fully alive and ready to tease and ensnare any man standing in her from getting to the next phase of her plot. With the reality of being located by her old partners a high possibility, she needs to disappear once again, but cash is needed to make that happen.

Laure concocts a kidnapping/ransom plan that she hopes will entangle Bardo and will have her walking away in those five-inch heels with $10 million. And if that means using her sexuality to see that plan through, she will use her sexuality.

After a bit of fun in a strip club, Laure has Bardo embroiled in her plan to the point he has no choice but to go along with her. On top of a bridge in the middle of the night, they play their parts—up to a point. In typical noir fashion, there are double-crosses and of course, murders. Will Laure’s intricate plan work and see her disappear into the night clutching millions or will she find out betrayal pays a price itself?

Remember the seven-year jumps forward previously in the story? When Laure takes Lily’s identity and lives as her? This time jump plays a crucial part in the conclusion of this movie. It’s a tricky concept to pull off and one I can’t recall happening in any previous De Palma film. There isn’t a ten minute chase sequence in this movie as there was in Carlito’s Way and there isn’t a confrontation between killers and “hero” in this story as there was in Dressed To Kill or Body Double (although keen De Palma students will immediately notice the similarities in Laure’s leather trench jacket not just to Carlito Brigante’s signature fashion item but to the killers black vinyl trench coat in Dressed To Kill).

So is Femme Fatale a great De Palma film? Well, it is a very good one. The opening heist sequence, which lasts a good 18 minutes, is fun to watch, but still not as ingeniously complex and energetic as the 20-minute single shot which began Snake Eyes (1998). De Palma here was working with a different cinematographer than his usual brilliant DP Stephen H. Burhum and one can feel his absence. The Burhum camera would glide and soar and do whatever De Palma could imagine and the results would be cinematic brilliance come to life (that tracking shot of Pacino in Grand Central Station in Carlito’s Way for example.) In this movie, that feeling of cinematic joy is missing.

Femme Fatale is a movie of dual-identities which isn’t uncommon through De Palma’s filmography; there were the conjoined/separated twins of Sisters, Dressed To Kill’s knife-wielding slasher, Raising Cain’s Carter Nix and even Tom Cruise and his face masks in Mission: Impossible (a device his Ethan Hunt still utilizes to great effect today.)

De Palma’s output after this film was spotty. The Black Dahlia could have been the perfect material for him, but the film turned out flat. I’m not sure what his war fake docudrama Redacted was supposed to be and Passion, well, Passion wasn’t overly bad although I remember little about it. Unless De Palma ever gets his long-planned Ambrose Chapel ever made, it looks as if Femme Fatale might be the final pure De Palma film we see from now on.

Even at that, in the early 2000s, this was a rather progressive move for the director. Unlike in Blow Out, Dressed To Kill or Body Double, there is no lingering camera lurking behind vulnerable women down long underground tunnels while a blade-carrying psycho is ready to jump them from behind and slice them up. Femme Fatale’s Laure is nobody’s victim. She might be De Palma’s strongest and fiercest female character yet. Like Carlito Brigante (one of De Palma’s most fleshed out and cunning on-screen characters), Laure is five steps ahead of everyone else and her destiny hers and hers alone to carve out.

For a filmmaker such as De Palma who spent nearly the entire ’80s having to defend himself for the way he portrayed female characters in his movies, Femme Fatale, which on its surface, looks merely like a simple evening sexy thriller, might be one of the director’s most powerful cinematic statements with a character that ranks among his most intelligent and fearless.

I hope he has more to say along these lines, has more characters like this to bring to life and has a few more cinema tricks inside his imagination to help him do it.