Raise your martini glasses! We are only a few months away from (hopefully) another fantastic James Bond adventure (er, at least, we think so. It’s already been delayed once by a global pandemic that is starting to feel like something a diabolical Bond villain would think up). No Time To Die, the 25th official James Bond release, directed by Cary Joji Fukunaga (Beasts of No Nation), stars Daniel Craig for the fifth, and likely final, time as superspy James Bond ending what has been a sterling era for the rugged 52-year-old.

Starting with 2006’s Casino Royale, a reboot of the franchise, Craig brought an athletic, deeply violent approach to the smooth spy previously known just as much for his time between the sheets with his costars as in fisticuffs with his wide-ranging rogues’ gallery. Though he faced scrutiny before his official debut, mainly for superficial things like his blond hair, Craig won over audiences with his toughness and intensity, eschewing one-liners and hokey charm for intense looks and subtle vulnerability. 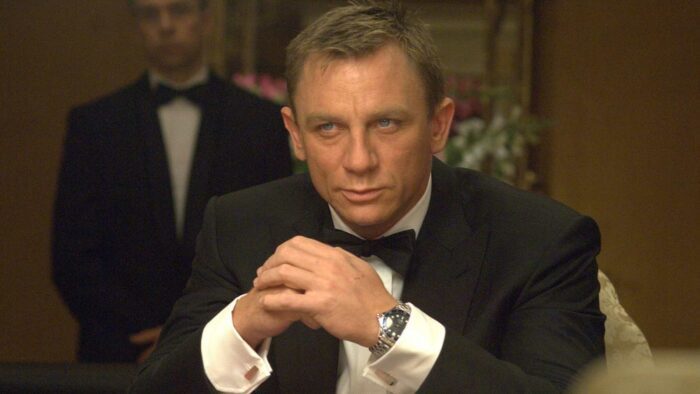 In many ways, Craig was channeling a prior James Bond actor, Timothy Dalton, who was a proto-type for Daniel Craig in the 1980s, forgoing some of the previous Bond’s overt charm and instead tapping into something deeper and more intense. While Dalton and Craig represented the internal Bonds, whose vivid eyes betrayed deep meaning and an almost mechanical nature to their inner workings, other actors, like Roger Moore, Pierce Brosnan, and the original Bond himself Sean Connery provided totally different takes on how the international man of mystery functioned.

But what is fascinating about the Bond oeuvre, that being twenty-four films with six different actors portraying the same character across 58 years, is that a film franchise could not only survive with so many different interpretations of one man but do so under the continuing change of social norms, political climates, entertainment trends, and never-ending adaptations to technology. The fact that one film from the 1960s can still stand up to a film from the 2000s shows the power of creativity and the industriousness of an idea. James Bond is, despite at times being relegated directly to a specific time period, a timeless concept. 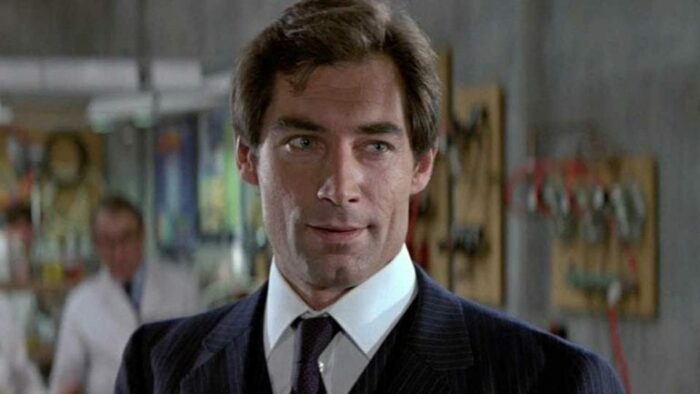 For adventure lives in any era. Men want to be Bond and women want to be with Bond…in any time period, or so the story goes. This is why trying to determine a Top 10 of a massive, worldwide, and beloved franchise is so difficult to do. But what I can promise you, despite the fact that I know many of you will disagree with the choices, is that the choices made are diverse, just like Bond history itself.

So, without further ado, here is my best attempt to take that long and diverse history of James Bond films and try to make a Top 10 list of the best movies. May God have mercy on my comments. Cheers!

Timothy Dalton’s second outing as Bond is a dark one as it led audiences, and Bond himself, down some pretty murky roads. To say fans, at least in the US, weren’t ready for it was true. The film did not do well at the United States’ box office (in a summer jam-packed with epic films) but the esteem for the film has risen in the last few decades. With License to Kill, Bond goes rogue to avenge the near-death/mutilation of his friend Felix Leiter at the hands of a brutal South American drug lord named Sanchez (Robert Davi). Forgoing exotic locations, one-liners, and fancy stunts, Dalton’s outing featured more blunt violence and cold, hard energy, something audiences today would eat up with a spoon.

Even though George Lazenby was technically the first to put on the tux after Sean Connery with On Her Majesty’s Secret Service in 1969, Roger Moore became the true heir to the Bond throne with his first appearance as the spy in Live and Let Die. And what an introduction it was. Trading the typical exotic locales for deep-down-in-the-bayou Lousiana and the slums of Harlem, Bond goes up against a twisted heroin dealer named Mr. Big and an enigmatic dictator of the fictional island San Monique, Dr. Kananga (Yaphet Kotto). Shot and portrayed more as a blaxploitation flick than a spy film, Live and Let Die might make some of today’s viewers shudder but you can’t deny it’s wacky good fun. How often does Bond go up against voodoo???

A lot of people have this one as number one and I don’t blame them. It is, in essence, the quintessential Bond film. Without it, there wouldn’t be Bond as we would later know him nor would there be international knock-offs or Austin Powers. With Goldfinger, the stakes went from nuclear to just plain world-shatteringly goofy, but in a good, entertaining way. Bond wasn’t just going up against Russian spies for control of data machines: he was saving the world from gold-obsessed madmen with all-powerful knockout gas, henchmen with killer bowlers, a legion of sexy airline pilots, and plans to rob the biggest bank in the universe…all with lasers! Connery was at his best in this film: smooth, in control, above it all, the epitome of cool and, as any superspy should be, unstoppable.

This film might not be in the Top 10 without Roger Deakins. The master cinematographer’s narrative sway on this film is so powerful that it is almost a character in itself. But beneath the heavenly visuals is a pretty damn good story too. Daniel Craig’s third outing as Bond allows us to dig into his past a little and, in a nice twist, lets us into the mind of the ever-present but always-mysterious M (Judi Dench) as well. Adding fuel to the story’s fire is the ambiguous villain Raoul Silva, played with subtle verve by Javier Bardem. His long and twisted road to villainy makes us question the existence of not only M and Bond but of spies in general and it adds a layer of drama not seen in many Bond films.

You can’t not have the original film of the series on the list. There is no James Bond without Dr. No. And though the formula would change considerably with Goldfinger, Dr. No laid down the seeds for what we would expect to this day with James Bond films. Plus it has, and forgive me for being superficial here, but some of the hottest smokeshows in Bond girl history right out the gate: Honey Ryder (Ursula Andress), Miss Taro (Zena Marshall), and Sylvia Trench (Eunice Gayson)? It took years for Bond films to match that level of sexy.

I suspect this to be a controversial choice, especially since GoldenEye is a film that exists, but Pierce Brosnan’s second outing as 007 is virtually a perfect Bond film. Not only is its structure sound, perfectly encapsulating the essence of what a Bond should be from the action to the cars to the gals and the villain’s diabolical plot, but it scores perfectly in almost every technical category too. A dynamic musical score by David Arnold, visual effects that stand up to today’s scrutiny, and some of the best stunt work in the canon. Plus villain Elliot Carver’s (Jonathan Pryce) scheme of using “fake news” (Trump voice) to start a world war has become almost prophetic decades later. And Michelle Yeoh is one of the best Bond girls of all time. Fight me!

Roger Moore was getting a little long in the tooth, even by his own admission, and it was time for a change of scenery. Hell, Bond had already been to space! So getting him down to Earth in an actual spy thriller seemed like the right thing to do in 1981 with For Your Eyes Only. The series went back to basics with Bond traveling to Greece to recover a missing piece of British military equipment all while fending off double agents in his midst. While some fantastical elements remain (a nifty snow skiing chase comes to mind), the films more serious tone and dedication to spycraft marks For Your Eyes Only as one of the more graceful entries in the canon.

The opening credits alone put this in the top five. But in all honestly, the only reason Daniel Craig’s introduction as James Bond wasn’t number one was simply that it was an origin story/reboot. As a result, it lacks some of the typical traits of a Bond film, instead setting up old ones whilst installing new ones for a new era. Director Martin Campbell’s second stint behind the camera directing Bond (the first being GoldenEye) is wall-to-wall action and suspense, edited to perfection by Stuart Baird and shot with a lush lens by Phil Méheux. It’s Craig’s raw intensity as a rookie 007 that hooks you in from the start and it is his flawless chemistry with the sultry Vesper Lynd (Eva Green) that sends it home.

Those who know me saw this one coming but yes, Timothy Dalton’s debut as James Bond takes the top spot. It is hard for me to pinpoint how perfect I feel this film is on every level. Director John Glen’s firm hand in the director’s chair, blending action and romance with ease? Alec Mill’s crisp cinematography, providing us a picturebook look at Cold War Europe with its foggy streets and bitter winters as well as Afghanistan’s biting heat? John Barry’s most dynamic and compelling Bond score (which is saying something)? The simply stellar opening title song by a-Ha? Or the fact that Timothy Dalton is the best Bond there ever was? Yes, I stand by that. His mixture of raw intensity and athleticism combined with a soft sensitive nature and vulnerability makes him both charming and dangerous. It is no wonder the poster said he was the most dangerous Bond. Ever. Because he was. And always will be. 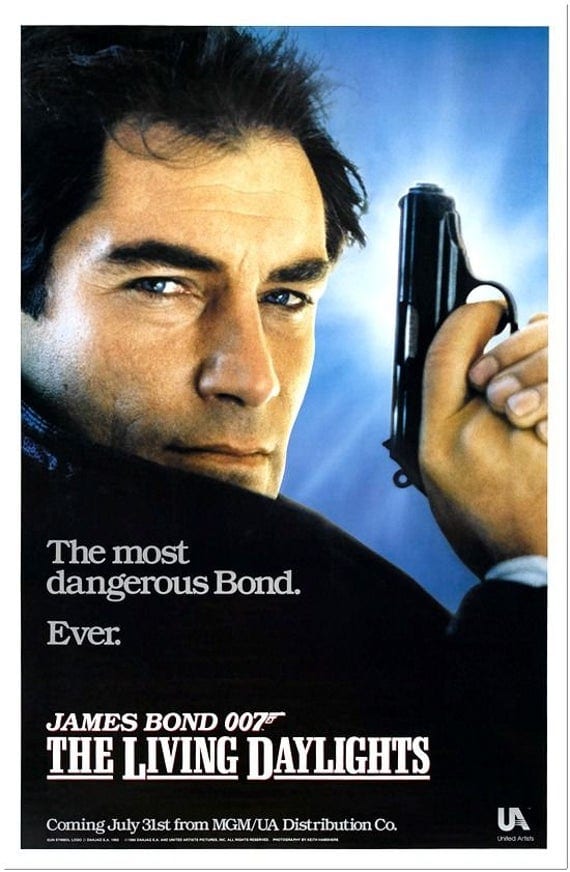 So out of twenty-four films, Roger Moore led the pack with three films in the top ten. Connery, Craig, and Dalton all had two each though it should be noted that Dalton only made two films and he secured the #10 and #1 spot. So what do you think of my picks? Please comment below and let’s discuss.