Making a film that is longer than two-and-a-half hours is a daunting challenge for a filmmaker, especially when the film focuses on a historical figure or event. There must be a balance between providing enough information to tell a compelling story and being able to engage an audience whose patience may wane in the ever-increasing runtime. However, director Olivier Assayas easily manages this challenge with his magnum opus, Carlos (2010). The film focuses on the titular character nicknamed Carlos the Jackal, whose real name was Ilich Ramírez Sánchez, as he organizes a legion of terrorist events throughout Europe from the early 1970s after the Munich Olympics massacre to the fall of the Soviet Union and his capture by international authorities. Throughout the lengthy five-and-a-half-hour runtime of the film, Assayas is able to make an engaging statement on the hypocrisy of gaining wealth and fame as an individual who spouts revolutionary rhetoric and endorses revolutionary actions.

In the first hour and 45 minutes of this three-part epic (conceived as a miniseries), there are assassination attempts, car bombings, airport attacks, and hostage situations, with many more intense moments to come. The audience is thrust into the perspective of Carlos (Edgar Ramírez), a Marxist-Leninist who plans and participates in many of the violent terrorist acts seen in the film. Assayas develops the character wonderfully during a dinner conversation in the first part of the film, where Carlos argues with one of his significant others about the validity of the armed revolution. Carlos says it’s a valid method in obtaining glory, while his girlfriend disagrees with him. This moment is pivotal in expressing the present aspects of narcissism Carlos has as he focuses on the concept of a glorious, violent revolution, belittling her speech-oriented demonstrations. This moment also hints at the vanity-focused nature of Carlos, as we see his notoriety increase through various public statements on his terrorist actions throughout Europe, whereas acting with more discretion would help him avoid international law enforcement and rival factions.

Carlos’s desire for international attention and glory is further shown during his training and initiation into the Popular Front for the Liberation of Palestine (PFLP) under the command of Wadie Haddad (Ahmad Kaabour). Assayas wonderfully captures the chaotic and messy nature of Carlos’s terrorist acts, showing multiple failed airplane bombings of the same target on different days or lengthy hostage negotiations set in multiple languages, making Carlos and his associates seem amateurish. With each terrorist act in the film, Assayas also increases the stakes for the main cast as they get into more complicated situations, such as the OPEC hostage crisis, without any clear goals of how to escape them without resorting to martyrdom, making Carlos and company less glamourous for an action film audience and instead surprisingly incompetent.

From the start of the film up to the OPEC hostage crisis, Carlos prides himself as a useful member of the PFLP and aspires to be a great soldier. While eager to be involved in numerous violent acts supporting the PFLP, Assayas allows the character to start his descent toward being a glory hound during the height of the hostage crisis. Instead of killing the hostages and himself in order to avoid capture from law forces while inside a hijacked plane, Carlos decides to take a random offer of money and free the hostages. This moment is a crucial turning point for Carlos, who trades his idealistic death in support of a political cause for mere wealth, rendering his incendiary political speeches worthless. With Carlos’s greedy decision to disregard his own beliefs for money, he becomes the capitalistic opportunist he rails against throughout the film and removes any chance of being a revolutionary icon like Che Guevara, who died without surrendering the communist cause he idealized. 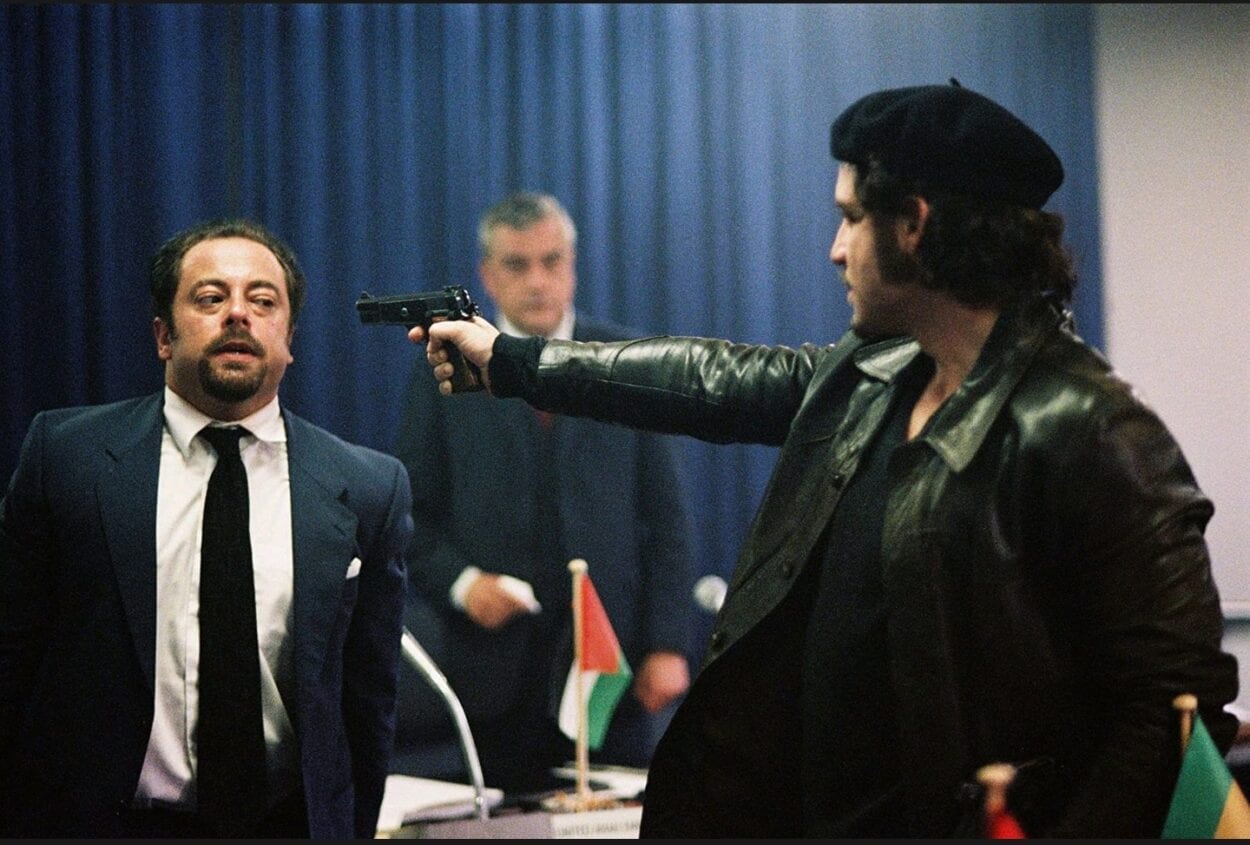 After Carlos is disgraced in the eyes of the PFLP for releasing the hostages and taking ransom money, he becomes a mercenary for hire, working with a group of German left-wing terrorists operating within the Middle East and countries behind the Iron Curtain. With this shift from political revolutionaries to mercenary groups, Assayas is able to show the excess of Carlos’ life as he embraces his lifestyle of grand living, a stark contrast to his revolutionary rhetoric of the first part. With the fancy cars that Carlos drives and the many women he has sexual encounters with, both inside and outside his mercenary group, he becomes a parody of a revolutionary figure who criticizes western governments for their bourgeois and excessive lifestyles.

While Carlos and his group travel from country to country, they become involved in backdoor Communist politics by working with the East German Stasi or the Hungarian police, underlining the quest for glory that Carlos desired as a soldier within the PFLP. As they continue to work with key political figures from various socialist and communist countries in Europe, Carlos engages in flattery toward those who would benefit him, making him just as opportunistic as capitalist politicians. Furthermore, this mingling of politicians and Carlos’ mercenary group still shows that they are being controlled by their host countries in order to be protected from international agencies seeking to imprison them for their terrorist actions. They’re political tools, on a leash. 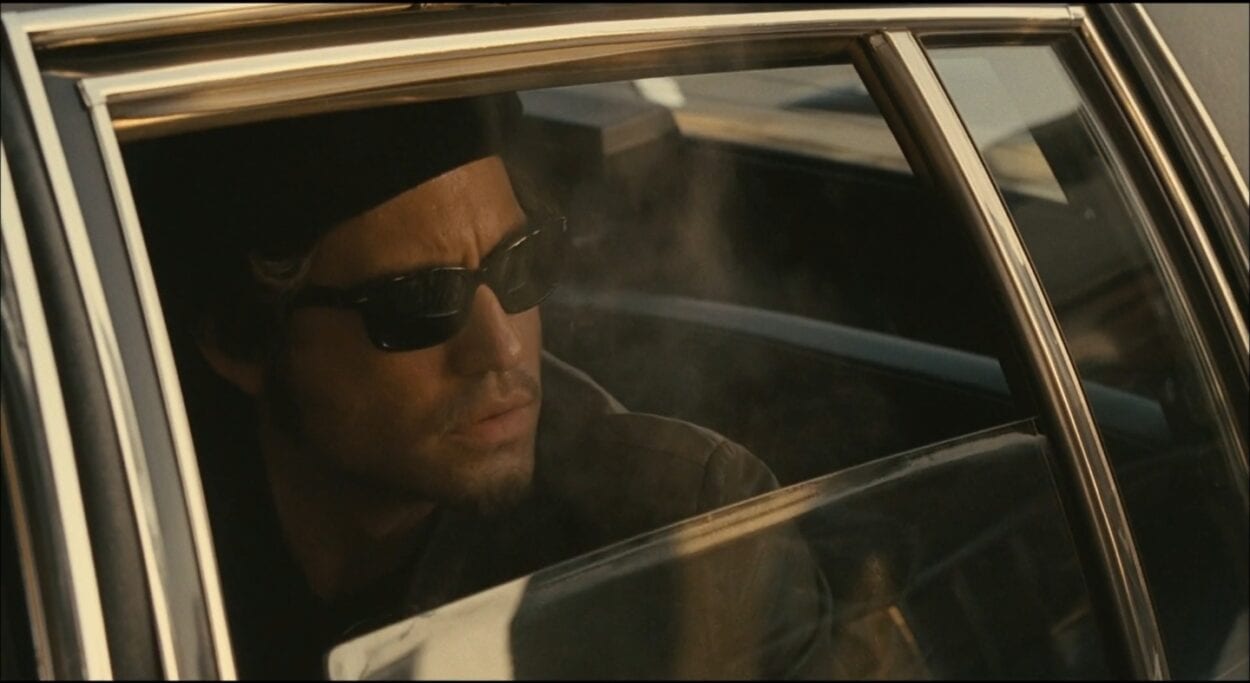 When the Cold War starts to fade and the Soviet Union begins to collapse, Carlos and his band of mercenaries are hunted down across Europe. Where Carlos thrived off the political turmoil that was present during the East/West conflicts, the Soviet Union’s dissolution disables the safety net of reliable socialist countries that would help shelter him, and he becomes a nuisance thanks to the Western governments hunting them down. The need for violent leftist revolutionaries like Carlos and his group becomes unnecessary as the capitalist mindset becomes the new fad for previously socialist or communist countries free from the grip of Russian influence. With each member of Carlos’ group being killed or captured by international authorities, his power as a political key player vanishes, making him a relic of a violent and chaotic era with no place in a modernized world seemingly taking its focus off proxy wars and battles of attrition.

As Carlos loses both his leftist group of soldiers and his family while hiding out in Sudan and teaching future revolutionaries, he becomes a shadow of the once spotlight-grabbing man with a gun to the head and a bomb for the car. Captured by authorities while undergoing a procedure for testicular issues, Carlos is not included in the lexicon of leftist figures like Lenin or Guevara but is instead one of many violent terrorists who plagued Europe in the 1970s. Instead of being a revolutionary figure who would be remembered for decades, Carlos instead becomes another face in the crowd.