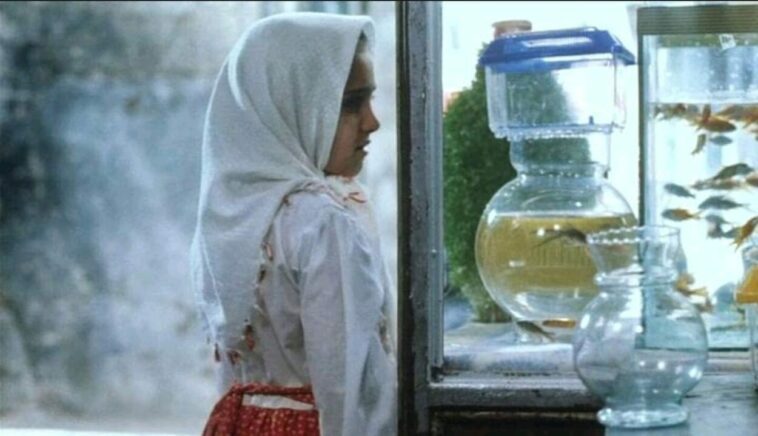 The experiences of childhood and growing older allow the opportunity for adult artists to reflect on the nature of innocence and lack of autonomy that affects many children on a daily basis as they develop in life. In director Jafar Panahi’s debut feature The White Balloon (1995), Panahi focuses on a young girl as she wanders through the Iranian capital of Tehran on her way to buy a goldfish, encountering various adults who ignore or refuse to help her. Panahi’s film effectively shows the singular perspective of a child going through a typically mundane task, as the imbalanced power dynamic between the child and surrounding adults is heavily reinforced.

Within the first few minutes of the film, Panahi places the audience into the energetic atmosphere of Tehran on its New Year holiday of Nowruz. Crowds are shuffling through a marketplace, market vendors are heard speaking loudly, and people are marching through with music until Panahi shifts focus to a woman (Fereshteh Sadre Orafaiy) and her young daughter Razieh (Aida Mohammadkhani), who looks at goldfish being sold at a nearby shop. This then leads to the central conflict of the story, as Razieh wants to buy a bigger goldfish from the store for the holiday, but their family has little money, and her mother thinks the fish they already have are fine.

This is just one of the many examples of the power dynamic between children and adults highlighted here, as the younger girl can’t buy a goldfish because she has no money of her own and no agency to buy one without her parent’s permission. Furthermore, the importance of the family’s money, which must be used for worthy, adult purposes, outweighs the simple desire of a child, despite Razieh’s insistence on the importance of a new fish. Abbas Kiarostami, who previously made films focused on children such as Where is the Friend’s House? (1987) and Homework (1989), is able to write a script that creates sympathy for the young girl. When Razieh’s money is taken without her permission by the snake charmers, or when she argues with the shopkeeper about the true price of the goldfish or loses the money in a cellar and can’t get it back, her powerlessness as a child is emphasized by the visual of her small stature surrounded by taller adult figures whose frames aren’t even fully shown in the frame, making the audience feel uneasy for the vulnerable Razieh. In addition, her readily apparent sadness in losing control during these situations is conveyed by crying, while the adults give blank expressions or chastize Razieh for her sadness. This allows Panahi to place an adult audience in a vulnerable child’s point of view amid the heavily contrasted visual emotions between characters. 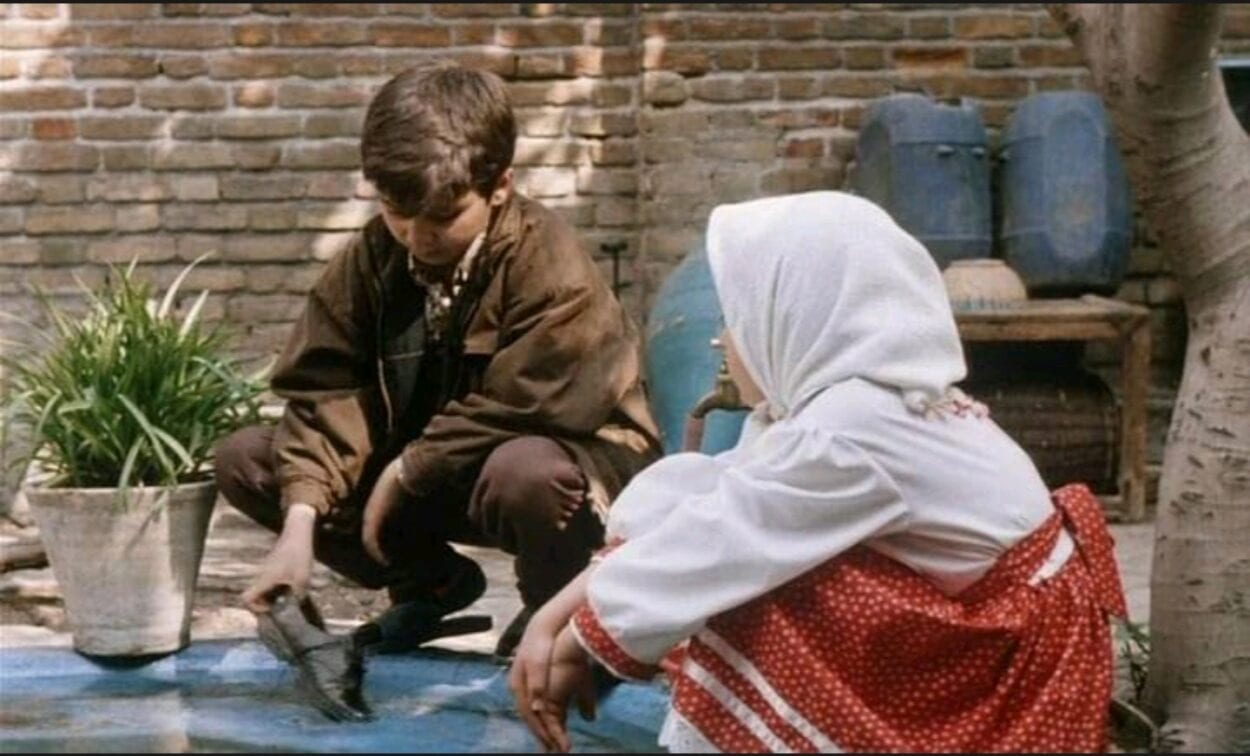 The true strength of Panahi’s film relies on the relatively mundane conflict, instead of trying to create a vast and powerful struggle between protagonist and antagonist. While the adults in the film question the importance of Razieh’s desire for a new goldfish (just as members of the audience might when viewing the film), both Panahi and Kiarostami justify the quest as being as important as any wish that any child might have throughout their lives that might not be fulfilled. And through the social-realist direction of the film through its use of non-actors and real shooting locations, it’s apparent to see the film’s influence on modern low-budget independent filmmaking techniques that can still utilize drama effectively.

The White Balloon (1995) is an important start for Panahi, as his later filmography would explore characters in positions of low standing in society in films such as Offside (2006) or 3 Faces (2018). Panahi’s humanistic approach toward the perspective of the young girl allows her voice to be heard, whereas such voices are often silenced by an older, male-centric world. Panahi allows the wishes of children to be just as valuable as those of adults, an ability that children in the real world often lack. As almost all the adults within the film meet Razieh’s request for help or aid with utter disdain, Panahi is able to build the audience’s sympathy toward her. Razieh’s older brother Ali (Mohsen Kafili) doesn’t fare better than his sister, either. At the beginning of the film, his father yells at him for buying soap instead of shampoo, tossing the soap at him. In addition, when Ali meets up with Razieh later in the film after she goes to buy the fish, we see a bruise on his face that’s brought to our attention by Razieh, but Ali doesn’t reveal its cause. Panahi underlines this possible sign of physical abuse, emphasizing the powerlessness of children through visual storytelling, with the apparent bruise being shown in medium and close shots without needing a verbal explanation of its origin. 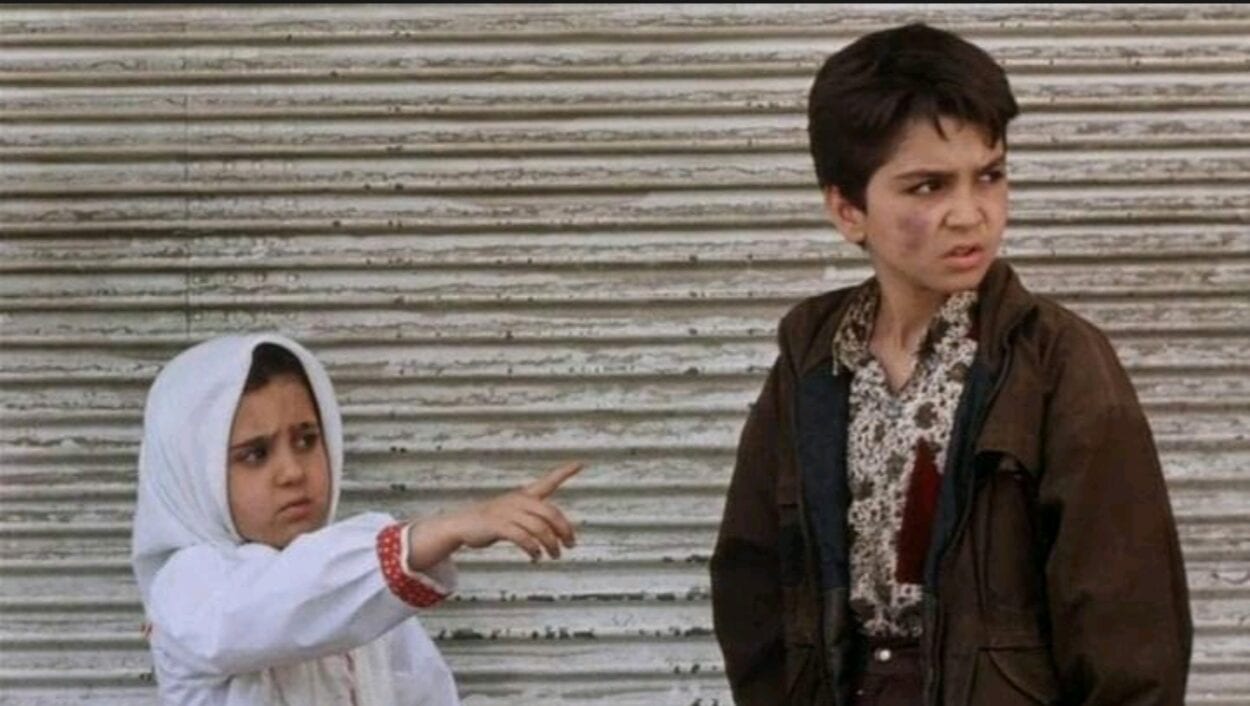 When both Razieh and Ali try to get the family money that fell in the cellar of a closed shop, they constantly fail to secure the help of nearby adults. When Ali leaves Razieh to get help elsewhere, a young Iranian soldier sits near Razieh and has a pleasant conversation with her, despite her reluctance to talk to him. Panahi shoots this sequence in lengthy takes to absorb the audience into the conversation between them, where the difference in their hometowns and perspectives are highlighted in a naturalistic, conversational method. Furthermore, this conversation is shown from a distance to show the highly contrasting visual differences between the rigid uniform colors and the taller stature of the soldier character and the brighter clothes and smaller appearance of Razieh. This dynamic between a young girl and adult counterparts can be seen in more recent films like The Florida Project (2017) or Eighth Grade (2018), which are similarly low-key dramas focusing on young girls trying to establish their agency in an adult world.

The film then ends as a young balloon seller uses a ballon-carrying stick with gum at the end to reach and get the money in the cellar below. Razieh and Ali are then able to get the fish and return home with the money for the New Year celebration. This ending is a very warm conclusion which shows that the comradery among the younger generations is able to overcome their difficulties and adult indifference, as they’re shown in closeups when working together, highlighting the difference in space between the more-distant adults and the closer, younger characters. Moreover, this ending also underscores the non-drastic nature of the film’s conflict, as all the characters return to their lives without any major sense that what they’ve done has been important or not in the world of the film. Just as Panahi showcases the ultimately good nature of children marginalized in an adult world 25 years ago, audiences today can experience a variety of newer child-centric art that celebrates youthful wishing in a cynical adult environment.